It Sucks. It’s Easy to Use. It’s Confusing. What Is It? Obamacare’s Exchanges. 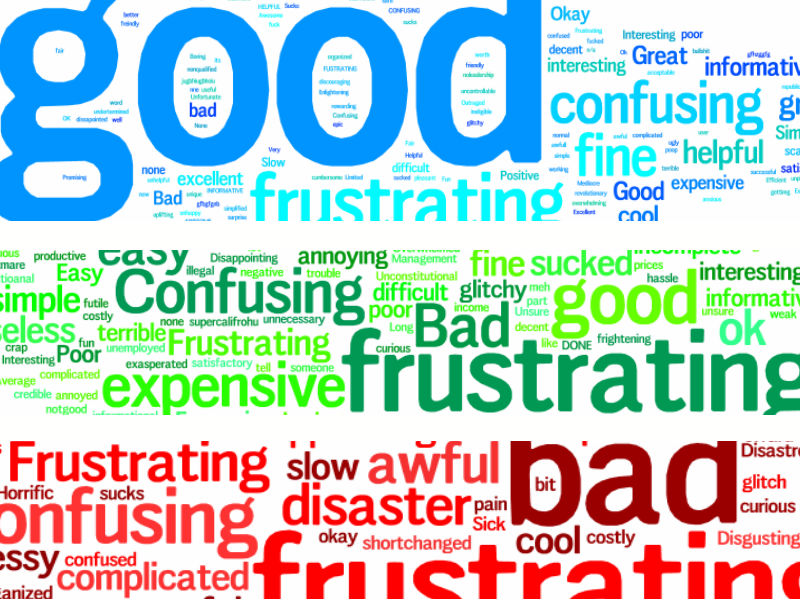 With the number of days left to sign-up for health insurance on the Obamacare exchanges entering the single digits, most attention is focused on whether the Obama administration will hit the 6 million mark. But whether or not people sign up for insurance through the exchanges may not influence how they feel about the law.

The White House has gone all in to get people signed up. President Obama has sat between two ferns with Zach Galifinakis and traded barbs about retweets on Ellen, all in an effort to get Americans to enroll. Numbers-wise, it appears to be working. The Obama administration reported that 5 million people and signed up for insurance coverage through the federal exchanges on Monday, putting them at 1 million people shy of the mark they set for themselves, based on Congressional Budget Office estimates of exactly how many people would enroll. (That number was originally set at 7 million, but the CBO reduced it after the major technological issues that plagued the federal exchanges.) Centers for Medicare and Medicaid Services Administrator Marilyn Tavenner last week said the last several days had been the busiest the exchange had seen since December.

This is a significant improvement for the federal exchanges, which signed people up in the single digits during its disastrous launch in October. The numbers alone suggest that, obviously, people are figuring the site out and the Obama administration is cleaning up the technological kinks. But how they feel about those exchanges appears to be a different matter, partly influenced by their political views.

Morning Consult polling from November and March asked respondents who had used an insurance exchange to describe, in one word, their experience. Like so much health polling, responses broke down as more positive from Democrats and more negative from Republicans. But the experiences of independents showed that even as they used the exchanges when the technology improved, they didn’t feel much more positive about the experience. It is important to note that the sample size of these responses is smaller than the overall poll, given that they were people who self-reported using the exchanges. But they capture the real-time thoughts of a subset of Americans in a way we don’t often see.

We begin with the one-word descriptions voters who lean Democrat and who used the exchanges offered in a November Morning Consult poll. The survey was conducted from November 14-17, 2013, among 2,008 registered voters. The word cloud below captures these responses visually. The bigger the word, the more frequently it was used.

While the response was still mostly positive, the technological challenges people faced obviously crept in to these responses, with words like “difficult,” “confusing” and “frustrating” making up some of the most frequent responses.

When we look at March polling on the same question, this group is significantly more positive when describing their experiences on the exchanges, solidifying around words like “good” and “easy.” The March Morning Consult poll was conducted from March 9-11, among 2,192 likely 2014 voters.

In contrast, Republicans have maintained their negative outlook of the exchanges, even as the user experience improved. Below captures the one-word descriptions of Republicans who used the exchanges in November.

Republican views of using the exchanges slightly improved by March—words like “ok,” “average” and “excellent” show up with more frequency—but the vast majority of responses continued to be negative.

These responses trend along what has been the norm for Obamacare: Democrats like it (although they were worried about the exchanges), Republicans don’t. What is interesting is that independents are also divided on their experiences on the exchanges, even as the technology improved and millions of Americans signed up. And those people did not report significantly more positive feelings, even as the insurance exchanges’ technology improved.

Here are independents’ views on the exchanges from November:

Their one-word descriptions are mostly negative, with a few positive words making an appearance. Like Democrats, you might expect their descriptions to solidify around positive words once the technology improved. But our March poll found that “confusing” and “frustrating” were the most frequently used words. Positive words, like “good” and “easy” also show up, but the majority of responses do not express happiness with the insurance exchange enrollment process.

The final day for exchange enrollment is March 31. The Obama administration will be swiftly judged on whether or not they were successful by how many people signed up for insurance on the exchanges and how close they get to the 6 million mark. It is important to not extrapolate too much from this sample, which is small due to the relatively narrow slice of the overall U.S. population that is using the exchanges right now. But it does suggest that even if the administration gets their 6 million number, it might not convince voters who aren’t already on their side that it was a good idea.

All word clouds created with Wordle.