For Solar to Take Off, It Needs a Longer Runway 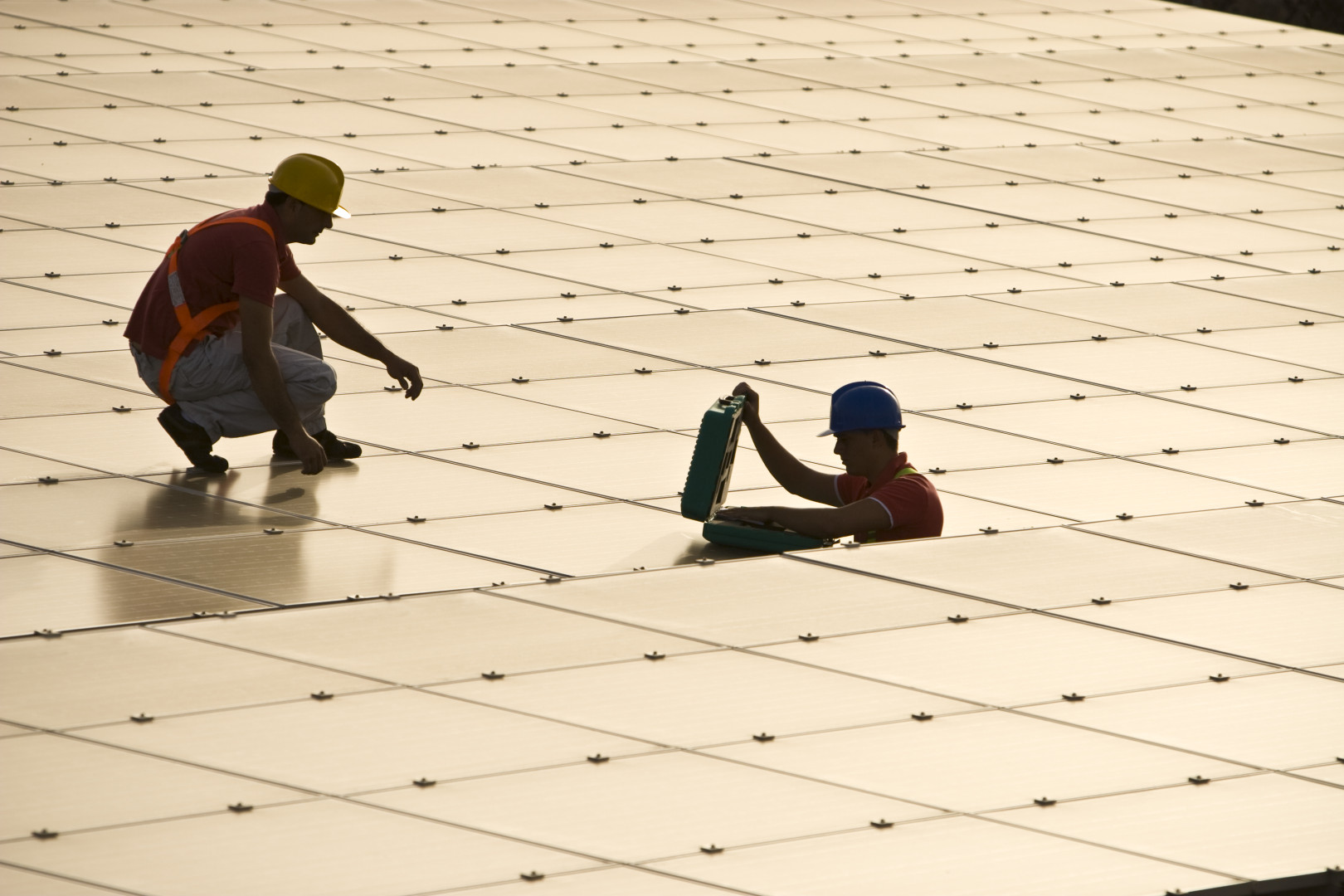 LL28/iStock.com
By Davis Burroughs
With major tax incentives set to scale back or expire, the booming solar industry is passing into unfamiliar territory. Uncertainty surrounding the extension of the solar investment tax credit is already slowing the industry’s growth and could eventually bring utility-scale solar growth to a dead halt – but for now, the industry is focusing on Congress.

“I liken it to a jet plane leaving on a runway,” said Ken Johnson, vice president of communications at the Solar Energy Industries Association, a trade group representing more than a thousand companies and leading the charge to extend the ITC. “The bigger the plane, the longer the runway you need – we just need a little more time.”

Enacted in 2006 and expanded in 2009, the ITC is the “principle federal policy mechanism” supporting the solar industry, according to Tom Starrs, a vice president at SunPower Corp., a Silicon Valley-based solar company. “There’s no question that it gave us a runway that contributed very substantially to the growth of the business.”

Gwen Bredehoeft, a renewable electricity analyst at the Energy Information Administration, said that the looming deadline is actually spurring short-term growth in the industry, but “we’re also seeing a rush… project developers are pushing to get online before 2017.”

“We see almost no additional growth within a decade after expiration.” – Gwen Bredehoeft, Energy Information Administration, on the impact on utility-scale solar

If the commercial ITC drops to 10 percent, then utility-scale solar growth would collapse, she said. “We see almost no additional growth within a decade after expiration.”

Though the residential market has shorter lead times, it too will likely slow down as the cutoff approaches, but the deadline isn’t having “quite as much of an impact” on rooftop solar, according to Bredehoeft.

In the event Congress lets the incentive diminish, Jason Burwen, a senior energy analyst at the Washington-based Bipartisan Policy Center, said there would likely be a wave of consolidation in the utility-scale market, and many “mom and pop” shops would have to close their doors.

“There is not a homogenous set of actors in this,” he said. “Different segments will be affected differently; depending where you are, it looks like more or less of a challenge.”

“No one likes the annual process of folks with temporary incentives crawling on their knees to get an extension,” Scott Hennessey, a director at SolarCity Corp., the nation’s largest residential solar power installer, said in an interview. “Everyone acknowledges that is a broken system.”

Hennessey added: “It would be a very dangerous policy for the federal government to say ‘yes, we’ll subsidize [commercial energy], but when it comes to home owners and individuals, we’ll pass on that.”

Though developers will continue building large-scale projects through 2016, “there’s already been a substantial slowdown in the pace of new projects,” said SunPower’s Starrs. The ITC can’t be claimed until a solar system is up and running, which takes about 2 to 4 years for utility or commercial scale – the “lead time,” in industry argot. As such, solar companies are “starting to feel the pinch,” according to Todd Foley, who directed U.S. policy at BP Solar and now works as chief strategy officer at the American Council on Renewable Energy.

In the meantime, the industry is working diligently to attract support from lawmakers by framing the ITC as an issue of fairness. As the nonpartisan Congressional Research Service wrote in a 2011 report on energy tax policy: “for more than a half a century, federal energy tax policy focused almost exclusively on increasing domestic oil and gas reserves and production.”

“The idea that solar, which is by far the most popular energy source in the country, would get the shortest tax treatment is politically absurd,” Miller said.

Oil companies have been subsidized for more than 100 years and still enjoy permanent preferential tax treatment. Shale gas drillers got their first big tax credit in 1980, which lasted for 20 years. Wind power received a tax credit in 1992, and expired only after multiple extensions – even then, the credit might get resurrected. Nuclear power has received varying degrees of tax support, including one permanent provision.

Miller and other solar proponents were quick to bring up the concept of creating a “level playing field,” the idea that renewables should get the same level of tax support that’s been given to traditional energy.

A strong majority of Americans, including 62 percent of Republicans, support federal tax breaks for renewables.

But the ITC is nonetheless a tough sell for many, particularly GOP lawmakers, who are generally opposed to the principle of using the tax code to favor one industry over another, according to Starrs.

“The irony in that, to me, is that as we’re entering this debate over extending the ITC,” he said. “There’s no comparable conversation of doing away with tax support for traditional energy.”

On the other hand, with just under two years remaining before a decision has to be made, it’s not yet clear who’s explicitly for or against the ITC.

Solar Energy Industries Association’s Johnson said Republicans do not oppose solar power – they just tend to dislike the idea of incentives. “But when you talk to them about tax fairness, a light bulb goes on and they suddenly get it.”

Bipartisan Policy Center’s Burwen said the ITC isn’t an issue that fits squarely into either party’s agenda. “It’s just not going to break across party lines, it’s going to break across state and regional lines,” he said; lawmakers are likely to base their stance on how it affects the job market for their constituents.

Opposition is more likely to come from groups ideologically opposed to tax credits, Burwen said, than industry players or utility companies: “I’m not aware of any utilities swinging against the ITC,” he said. “Part of the reason is because the ITC doesn’t put anything at risk for utilities. It makes solar project power purchase agreements more affordable, and doesn’t impact the pricing of electricity the same way a production tax credit does.”

Instead of incentivizing power production, like a production tax credit, the ITC merely makes it easier to install solar power.

Laura Small, a policy associate at the Washington-based Environmental and Energy Study Institute, pointed out that the ITC already has the support of some prominent Republicans. John Thune of South Dakota, who co-chairs the Senate’s Business Income Tax Working Group, has previously voted to extend the credit, as has Republican Whip John Cornyn of Texas.

Thune’s working group will likely take up the ITC before its expiration as part of a broader tax reform effort.

Small said that even in a divided Congress there’s definitely room for a longer-term phase-out of the ITC, though a brief extension might be more likely.

“There’s just too much good news happening to think Congress would let the ITC expire,” said SolarCity Public Affairs Director Will Craven. “One out of every 78 jobs created in 2014 was in the solar industry – that’s got to be compelling to the nation’s lawmakers.”

Bracing For Impact, With Optimism

If the ITC is indeed cut, the industry has projected outcomes that range from a speed bump to an apocalypse.

Small said the impact would depend on how far system prices drop before the credit’s expiration. The cheaper solar gets, the better its chances of “weathering the shock.”

Rachel Pierson, an energy analyst at Beacon Policy Advisors, an independent research firm headquartered in Washington, said that, “It’s likely to be a political flashpoint, but only when it comes to it [the deadline], which is bad for solar because it creates uncertainty in the market.”

SEIA, the solar industry association, falls more on the doomsday side of the equation. They project that if Congress does nothing, 90 percent of small installers are going to go out of business, along with 100,000 jobs and10 gigawatts of generating capacity.

Johnson said SEIA will roll out a legislative proposal asking Congress for an extension of the ITC during this session.

SolarCity’s Hennessey said the industry is on a “noisy ride” toward a devastating cliff. “As a company we will survive, but the small businesses are the ones that are going to go off the cliff.”

Miller from the Alliance for Solar Choice said that while commercial, utility-scale solar would be hit the hardest, residential solar is inexpensive enough to preserve some momentum.

“While federal policy is important, there is no stopping rooftop solar,” Miller said.

Timothy Fox, an associate who covers alternative power and energy efficiency at Washington-based ClearView Energy Partners LLC, wrote in an email that solar would likely weather the turbulence better than the wind power industry, which has suffered as its Production Tax Credit limps along. However, Fox notes: “Forecasts we have been following expect a significant drop (>50% in 2017) is possible, and then the industry would likely grow again, albeit more slowly than in the past.”

Rather than dwelling on worst-case scenarios, most in the industry would rather set their sights on reform or renewal.

“We’re not by any means throwing in the towel,” Starrs said. “We know it’ll be a tough battle, particularly in this Congress, but we have a lot of allies out there.”

Others are taking the long view. “Looking at a single provision in the tax code is obviously interesting to the industry itself,” Burwen said. “But from a policy perspective we need to have a fundamentally larger review of tax provisions.”