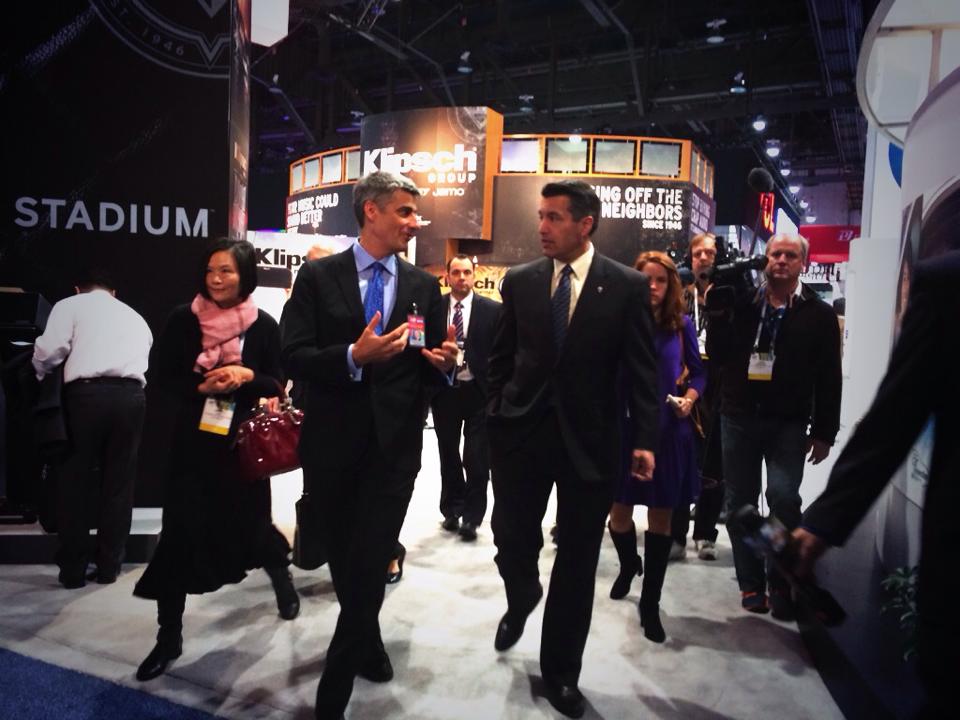 Michael Petricone is taking on a tough task — getting Washington and tech companies on the same page. His position as senior vice president of government affairs for the Consumer Electronics Association (read: big-time tech lobbyist) is “the best job in DC,” he said. And you can tell. He talks fast, his eyes alive, almost like he’s on a permanent sugar high.

It might be his love of gadgets. It might be his blind love for technology and being involved in its growth. He’s the kind of guy who describes Uber and Lyft (two companies he represents) as “essential parts of [his] parenting strategy,” and he wants to make sure they don’t get regulated out of business.

Regardless, he believes there can be a conversation between regulators and the regulated in the tech industry. He also says that lawmakers are actually much more hip to tech issues than many assume.

CEA represents over 2,000 tech companies, including Google, Microsoft, Uber, and Yelp. Petricone’s dedication to those companies, and to tech policy in general, is deeply embedded in one key idea that he seamed into each story he told, whether he was wrapping up a conversation about his college radio show or discussing his time lobbying in Washington: The country needs people protecting and encouraging innovation.

To Petricone, innovation is the backbone of the American dream, full of people who are looking to develop new technologies that change the everyday. He likes the word “disruptors.”

The old joke of Silicon Valley is that everyone thinks they will “make the world a better place.” For Petricone, it’s not a joke. He absolutely believes disruptive services, like Uber, do this.

In Washington, Petricone explained, tech lobbying is “all about education, because a lot of these are new issues. What we work hard to do is bring innovators into direct contact with policymakers. We find that the best lobbyists are our member companies.”

He says a key moment that brought this change in the dynamic between tech and government closer came with the 2011-2012 fight against two bills: the Stop Online Piracy Act, or SOPA, in the House and its companion, the PROTECT IP Act, or PIPA, in the Senate.

SOPA and PIPA were partner bills in Congress aimed at extending law enforcement’s ability to police online copyright infringement and counterfeit goods sold and moved online. Critics of the bill argued that it would have stifled free speech and (you guessed it) innovation.

“It was a watershed moment for members of Congress, because they had always confined tech issues as geek issues for fringe group of voters,” Petricone said. “They realized these are issues that their constituents really care about. It forced policymakers to focus on the tech issues and educate themselves, which subsequently happened.”

The bill, in the eyes of many, would have ruined the Internet. Among many controversial provisions, the bill would have allowed law enforcement to block access to entire Internet domains for just one blog or Web page’s infringing content.

The two bills died in Congress after massive pushback from the tech community and regular constituents as well. This was monumental, according to Petricone. “By all the laws of D.C. physics, [SOPA] was going to pass. The committee chairman was behind it, and there were dozens of co-sponsors, and it was in the fast lane,” he said.

Then members saw the anger the two bills provoked first-hand at CEA’s convention. “That year a bunch of members of Congress went up to CES and I think just in talking to people there (and we have 160,000 people there) they came back and reported to their colleagues, ‘We have a real problem here because everybody is angry about this. This is a big deal,’” he said.

“One of the things I like about tech issues is that they tend to be bipartisan,” he added. “There are Republicans who get it, there are Democrats who get it, and they work together.”

This is true, to an extent. Patent reform has seen support from both Democrats and Republicans in both chambers of Congress. The bipartisan pair of Sen. Richard Burr (R-N.C.) and Dianne Feinstein (D-Calif.) has generally agreed on cybersecurity. When they agree, the Senate Intelligence Chairman and ranking member respectively hold great power.

However, there are many issues in tech that remain much more split by party lines. Net neutrality, personal privacy, surveillance, and telecommunications regulations all send members to their respective sides of the aisle.

“There is this stereotype of the hip innovator and the fussy policymaker, and it’s not true anymore,” Petricone said. “The other stereotype is the innovator who wants to keep Washington D.C. at arm’s length, because they say, ‘We move quickly and they don’t,’ and I think that stereotype has also broken down.”

As tech issues continue to develop and entire realms of tech that are not yet invented become subject to lobbying battles on the Hill, protecting that innovation remains central to Petricone and CEA’s fight to shape policy that cultivates technological growth.

“The United States is the world leader in innovation and in the digital economy, by any measure, bar none,” he said. “It didn’t happen by happenstance or coincidence. It happened because, through its history, it made good choices.”