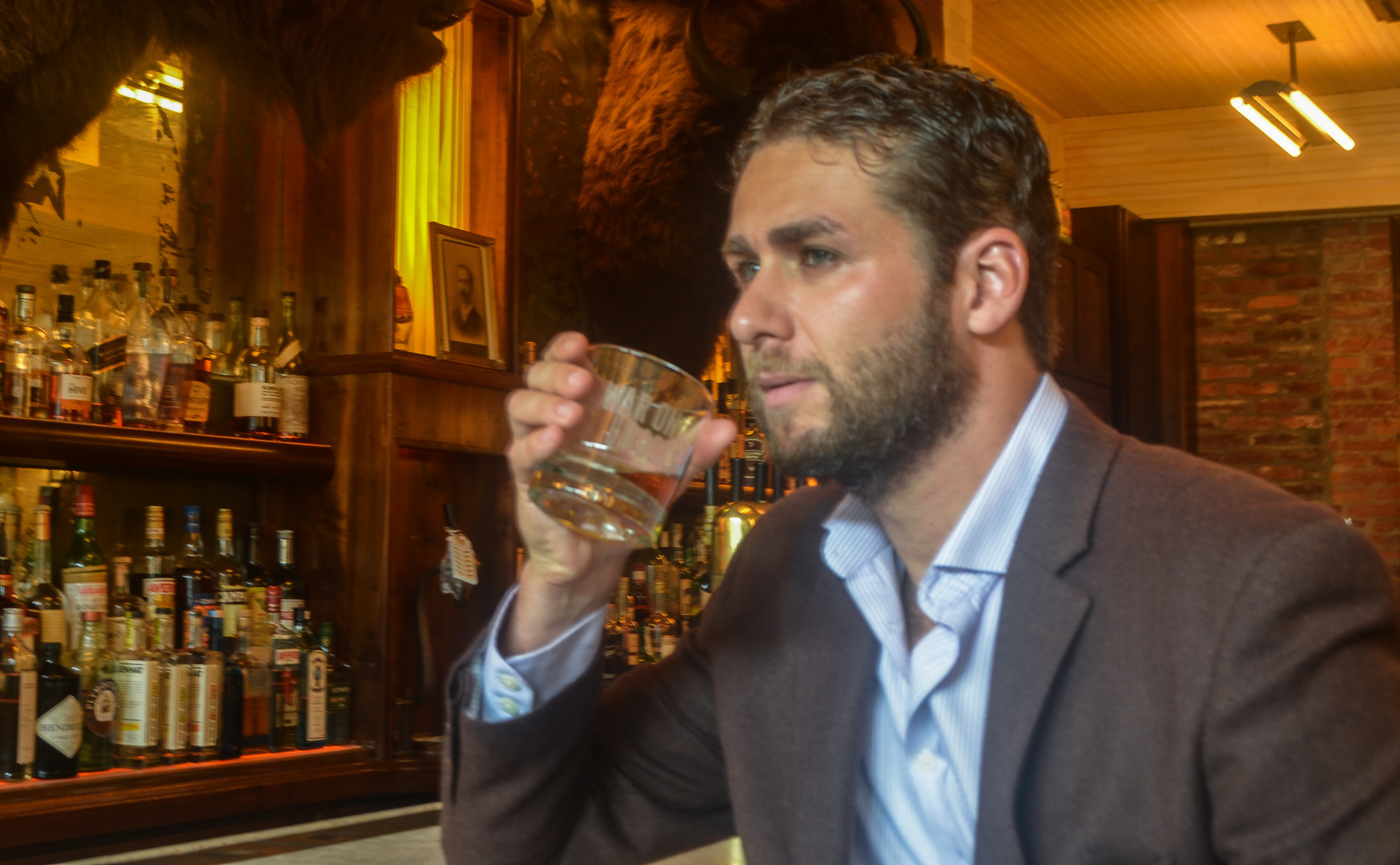 By Rob Kunzig
Ryan Evans sat in the bar of the Fairfax Hotel with his hand wrapped around an almost-empty Shock-Top. Before I showed up, he was meeting with Lawrence Freedman, professor of war studies at King’s College London, and author of On Strategy. After I left, he had a few more beers with a British soldier he met in Afghanistan.

For the editor-in-chief of the defense world’s smartest Web site, War On The Rocks, these are good friends to have.

“We’re not a blog,” Evans said. “Blogs are a reverse chronological scroll of unedited content. We put War On The Rocks together as a place for experienced voices, authentic voices, people who have been there and done that.”

The site’s masthead is heavy with former military officers and intelligence officials-turned-academics. Imagine your college debate team, only half of the members have combat experience.

The Web site launched in July 2013 with a bold mission statement: “Our realism is not theoretical, but is rather a perspective earned through experience and reasoning.”  The opening article by retired Admiral James Stavridis was a statement in and of itself – the former NATO commander has a reputation for intellect and strategic savvy. Within two months, the rumor mill was telling Evans that WOTR’s articles were circulating at the highest levels of military leadership.

Evans is cagey about who exactly at the upper echelons reads their analyses. His blog has avowed fans such as Washington Post columnist David Ignatius, author Tom Ricks, and Sen. John McCain (R-Ariz.).

“He’s said some nice words about us, even though we’re not always in agreement,” Evans said of McCain, arguably the Senate’s loudest voice on national security. In an interview with WOTR, McCain thanked Evans for creating “a forum for some of the most substantive discussion and debate on foreign policy and national security issues.”

Evans paraphrases a compliment given by a friend in the film industry: “When you read Vice, you feel like this is how a guy from Brooklyn sees the fight against the Islamic State,” the friend said. “When you read War On The Rocks, it’s like you’re eavesdropping on a conversation Washington is having with itself.”

At the moment, that conversation is more like a shouting match. The Senate recently passed a National Defense Authorization Act with a veto-proof majority. Nonetheless, President Obama is likely to kill the bill over its liberal use of a funding source usually reserved for overseas contingencies.

Though Evans disagrees with McCain on Syria, he lauds the senator’s efforts to reform military procurement. Ditto Rep. Randy Forbes (R-Va.) and Rep. Mac Thornberry (R-Texas). Given his druthers, Evans would also see another round of military base closures, and he wishes Sen. Tim Kaine’s (D-Va.) strident questioning of the president’s Authorized Use of Military Force would get a wider audience.

War On The Rocks is a double entendre. Many of its foundational conversations took place over drinks, and many of those drinks were poured while Evans was “on the rocks,” burned out after a tour in Afghanistan as a cultural advisor for the International Security Assistance Force.

“I wanted to be someone who knew what they were talking about,” Evans said. Having recently earned his master’s degree in war studies from King’s College in London, Evans joined the “civilian surge” that was meant to help rebuild and stabilize Afghanistan. For nine months, Evans served in the Human Terrain program, a controversial initiative that embedded social scientists with infantry units to act as cultural interpreters.

“I believed in the surge,” he said. “I figured we could really transform Afghan society.”

He ended up in Laskhar-Ga, the capital of Afghanistan’s rural, impoverished Helmand province, where “90 percent of the people didn’t know about 9/11, didn’t know why we were there.” Instead of fighting a geopolitical battle against the Taliban, Evans said, coalition forces were caught between local interests in a deeply parochial conflict. “We were our own worst enemy in so many ways,” he said.

He spent nine months embedded with Danish, British and U.S. forces. When his contract was up, he declined to renew it, thoroughly disillusioned with the practice of modern war. He returned to D.C. and got a job at the Center for National Interest as assistant director. He left that job to focus on WOTR full-time. Afghanistan wasn’t a total loss, though – while there, he met John Amble, then an Army intelligence officer, now WOTR’s co-founder and managing editor.

He won’t trash his former employer, but Evans said he immediately noticed the weaknesses of the think tank model. It was too slow, too encumbered by the nonprofit business model.

“With think tanks, you spend a lot of time raising money to execute,” he said. “At War On The Rocks, we just execute. We get a smart person to write something smart, and we do it every day.”

A quick scan of the site’s front page shows Evans’s site living up to his boast: if “Special Operations, Intelligence, And Airpower: A Lethal Triumvirate” isn’t brainy enough for you, try “Corbett Vs. The Caliphate: What A Long-Dead Naval Strategist Tells Us About Combating Islamic State.”

It’s not all academic. The writing is crisp and aggressive, accessible in tone without sacrificing rigor. And it’s relevant. As the 2016 elections approach, WOTR is tracking candidates’ positions on national security. “No matter who gets elected, Democrat or Republican, you’re going to see a harder-line approach,” Evans said.

He likes Republican presidential hopeful Marco Rubio (“His ideas are most fully-formed, though he definitely leans neo-con,” he said), but he doesn’t take billionaire Donald Trump too seriously. He said Democratic frontrunner Hillary Clinton is a hawk, no matter how progressive her message. “That’s a bad thing. Getting into wars that aren’t in our core national interest will always be a bad thing.”

War On The Rocks also hosts a space for creative writing on the future of war. Called “Art of War,” the blog features writers like P.W. Singer and August Cole — authors of futurist techno-thriller Ghost Fleet — alongside other writers who use fiction to shade in the human dimension of war.

“If all you’ve read about war is nonfiction, then you don’t really understand war,” said Evans, who claims Joseph Heller and Graham Greene as literary touchstones. Heller’s classic Catch-22 was a revelation. “It’s a tragedy,” he said. “It’s a man grappling with not wanting to die.”

War On The Rocks launched with a Kickstarter campaign that netted $4,450 – just enough to cover web design and other operating expenses. A more recent campaign, which also pulled funds from IndieGo and individual contributions, netted over $70,000, Evans said. Since WOTR is now his full-time job, he’s meeting with angel investors to help the site branch into multimedia content.

Evans calls it a media company, but won’t call himself a journalist. His site doesn’t break news and won’t publish leaked documents. (Evans holds an active security clearance.) “The world doesn’t need more defense journalists,” he said. “What we need are experts.”

Plus, he said with a smirk: “I don’t write about people.”