Morning Consult Campaigns, Presented by Vote4Energy: The Path to 270 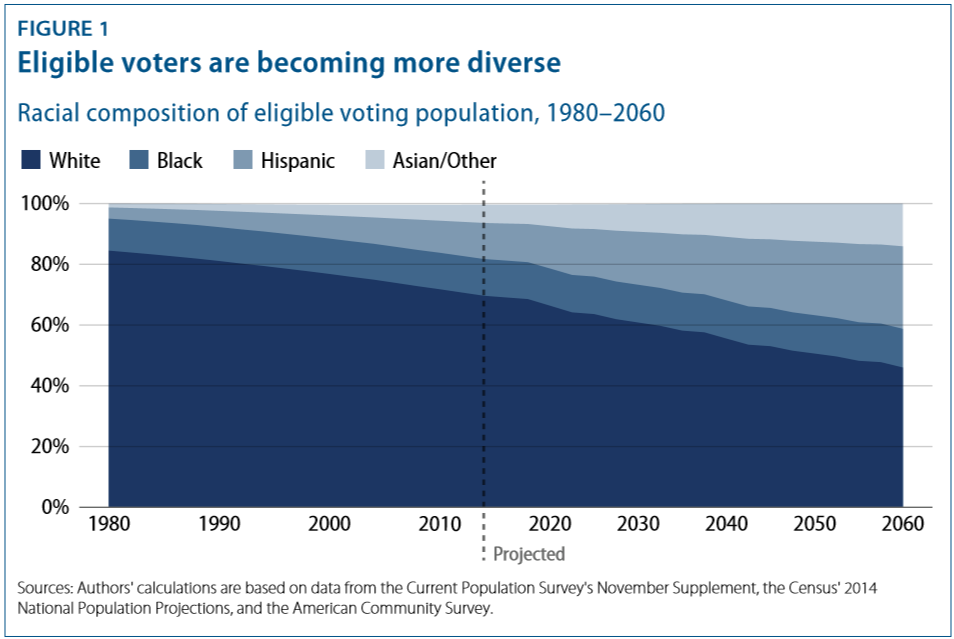 A groundbreaking new report coming Thursday from the Center for American Progress highlights a rapidly changing electorate — and the challenges ahead for both Democrats and Republicans plotting their path to the White House.

On its face, that’s great news for Democrats: President Obama won minority voters in 2012 by a whopping 81 percent to 17 percent, while Mitt Romney won white working class voters by a 60 percent to 38 percent margin. But there’s no guarantee the next Democratic nominee can hold 81 percent of minority voters, giving Republicans an opening to claw back some support among the fastest-growing segments of the electorate. It’s an opportunity Republicans cannot afford to miss.

If the Democratic nominee holds Colorado, Nevada (where the minority population makes up 3 percentage points more of the electorate than it did in 2012) and New Mexico, along with the Blue Wall and Midwestern and Rust Belt bastions of Pennsylvania, Michigan, Minnesota, Wisconsin and Iowa, he or she will be just two electoral votes short of the 270 needed to win, even without Ohio and New South states.

Minority populations are also projected to grow by 2 percentage points each in those New South states — North Carolina, Virginia and Florida. The demographers conclude: “The Democratic path to victory lies in holding the demographic and geographic wall of support that has fueled victory in the past two presidential elections. … The Republican path to victory, by contrast, could go in one of two directions. First, the party could put all its cards on a nominee and policy strategy that seeks to maximize conservative anger at President Obama and disgust with Washington while appealing to similarly agitated and concerned independent voters in key swing states.”

“More promising for Republicans, we believe, is a second path focused on presenting a strong and compelling case to voters that their nominee and party agenda is sufficiently moderate and inclusive to represent a full range of Americans while simultaneously changing the direction of Washington and turning the corner on the Obama years.”

The full report, “The Path to 270 in 2016: Can the Obama Coalition Survive?” is crammed with fascinating charts and graphs. It will be released here on Thursday at 6 a.m.

Add another entry to the long list of statements that were supposed to, but didn’t, deflate Donald Trump’s poll numbers. Nearly half of all registered voters, 49 percent, say they support Trump’s call to stop Muslims from immigrating to the U.S., while just 41 percent oppose a ban.

Among Republicans, the numbers are even more stark: 70 percent of self-identified Republicans say they support his proposed ban on Muslim immigrants, and 53 percent of Republicans say Trump’s comments made them view the real estate tycoon more favorably. Just 25 percent said they now view him less favorably.

Trump still leads the GOP field by a wide margin, according to the latest Morning Consult tracking poll. He takes 40 percent of the vote, four times more than his nearest competitor, retired neurosurgeon Ben Carson.

When you settle in this evening to watch the latest Republican presidential debate on CNN, you’ll be in good company: Almost seven in ten Americans have watched at least some of the debates this year — and that’s fueling a surge of voter interest in the 2016 election.

Forty-eight percent of adults told Pew Research Center pollsters they have given “a lot” of thought to candidates running for president in 2016, up from 35 percent at the same point in 2007. And 69 percent said they’ve watched any of the presidential debates, up from 43 percent eight years ago. Two-thirds of voters say the campaign is interesting, while only a quarter call it dull (…no wonder the Times and the Post have a 2016 story on their front page every day).

Percentage who have watched any of the debates, by age:

Voter interest is up across the board, compared with the 2008 cycle, but it’s especially high among Republicans. Eight years ago, 74 percent of self-identified Republicans had given some or a lot of thought to the candidates running; today, that number is 86 percent. Three quarters of Democrats say the same, up four points from the epic 2008 campaign.

Violence On Our Minds

The recent terror attacks in Paris and San Bernardino are weighing heavily on the minds of voters going into the holiday season. A new NBC/Wall Street Journal poll finds the three defining news events of the year cited most often by voters involve shootings: 29 percent chose the terror attacks in Paris, 23 percent cited San Bernardino and 22 percent said mass shootings in general.

An incredible — and depressing — 71 percent of registered voters say shootings and other random acts of violence that took place this year are now a permanent part of American life. But voters aren’t in the mood to give the federal government more power to regulate firearms: 52 percent say they worry the government will go too far in restricting citizens’ rights to own guns, while 44 percent say they’re more worried the government won’t do enough to regulate access.

Is all this concern fueling a wave of new pessimism among voters? Just 20 percent say the country is headed in the right direction, the lowest point in NBC/Wall Street Journal polling since November 2011.

In fact, we’ve seen a dip in right direction/wrong track numbers across pollsters over the last month. Here’s a look at the latest polls, compared with their own previous results:

Here are trendlines from Morning Consult polling over the last six months: Shameless plug: Go find your own trendlines, on more than 50,000 questions asked by pollsters across the country, at Morning Consult Intelligence.

Pollsters at Winthrop University took a deep dive into South Carolina’s Republican electorate to try to explain where Donald Trump’s support is coming from. Their conclusion: His supporters are mostly white men who feel burdened — and threatened — by a changing society.

Below the toplines, Trump supporters are much more likely to feel aggrieved than Republican voters at large. One in three Trump supporters say whites face a “great deal” of discrimination, while 68 percent say whites face more or the same amount of discrimination as African Americans (compared to about half of all South Carolina Republicans). Forty-eight percent of Republican voters favor creating a database of all Muslims in the United States; among Trump backers, that number is 72 percent.

The poll shows Republicans in South Carolina “feel their voice has been ignored,” Winthrop pollster Scott Huffmon told The State newspaper. “Someone like Trump comes along voicing their concerns, and that kind of taps into their fears, their worries. ‘Here’s a guy who says what I want to say and what people need to hear.'”

Trump, as we’ve said before, is the candidate for the guy who feels he can’t tell the off-color joke at the water cooler anymore.

Question we’d love to see asked: Which was the greatest video game console ever invented? If Sega Genesis didn’t command a majority, we’d know the poll was skewed.