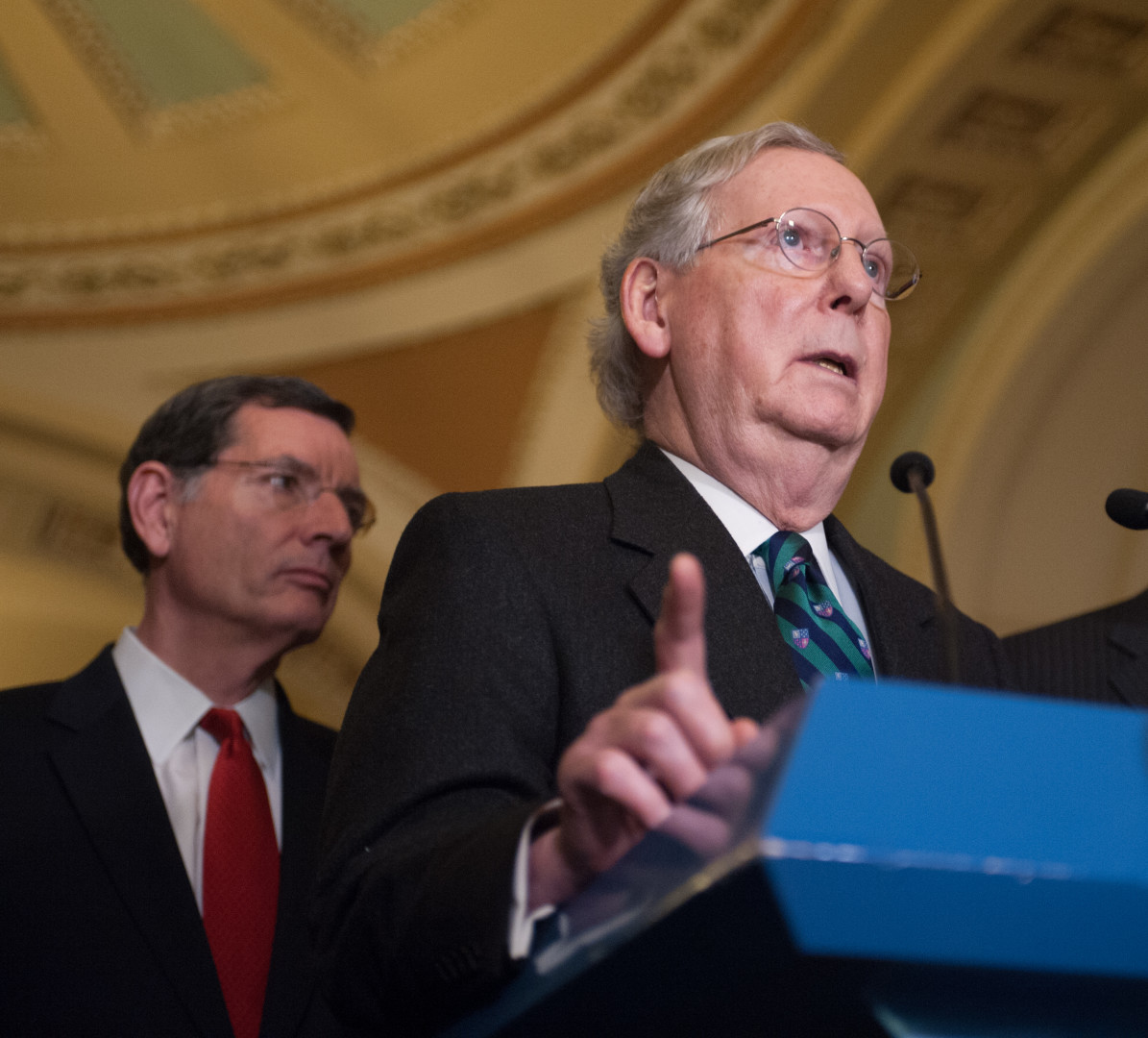 Senate Majority Leader Mitch McConnell (R-Ky.) wants his chamber to vote on a budget resolution even though technically he doesn’t have to, and even though it might jeopardize his majority. And he’s doing it at least in part to spite Senate Minority Leader Harry Reid (D-Nev.).

Every fiscal year, Congress is supposed to write a budget, typically a partisan document that broadly outlines the agenda of whichever party writes it by highlighting fiscal priorities. Last year, for the first time since Democrats controlled both chambers, the GOP-led Congress succeeded in passing the same budget resolution on both sides of the Capitol.

Budget resolutions raise the prospect of something called “vote-a-rama,” a legislative phenomenon unique to the Senate that takes place with consideration of a budget resolution. Essentially a marathon of back-to-back amendment votes, the event offers rank-and-file senators the rare chance to quickly get recorded votes on a wide range of issues. It’s mostly risk-free because congressional budgets, and thus any attached amendments, don’t become law.

Sometimes lawmakers use the opportunity to prove that a particular bill or policy has enough support to move off the floor quickly — an important argument for persuading leaders to take up a bill in the first place.

But more often, vote-a-rama becomes a modern-day gladiatorial arena, featuring amendments from both parties wholly designed to force vulnerable incumbents to take sides on controversial issues. War rooms are set up directly off of the floor, as the parties’ top budget experts try to make the case that the other side’s proposals are not germane. It’s an elaborate, exhausting process with one overarching objective — create explosive fodder for election-season campaign advertisements.

“While some of these are very important policy issues, many fall under message votes that can be used instantaneously by Senate campaigns across the country,” said Ron Bonjean, who served as spokesman for former Senate Majority Leader Trent Lott (R-Miss.), and now runs his own public affairs firm.

You would think Senate Republicans, whose majority faces an unfavorable election map this year, would prefer to avoid a showdown so often used to put incumbents in a tight spot. And in fact they could opt to do just that. A budget agreement signed into law last fall included “deemed language” that allows Congress to dispense with a budget for this upcoming fiscal year.

So why doesn’t McConnell take advantage of the opportunity to skip vote-a-rama? The answer, it seems, has a lot to do with his Democratic predecessor. “I think Mitch, he has such a bad taste in his mouth from Harry taking that position over and over,” explained one GOP senator, who requested anonymity to speak candidly about leadership’s motivations.

“The law says you’re supposed to do a budget every year,” the senator continued. “[To] say, ‘I’m just not going to follow the law because it might hurt us at the polls’ is not very statesmanlike.”

When asked for comment, a spokesman for McConnell would only reaffirm the leader’s commitment to doing a budget this year.

Reid, who led the chamber for eight years until McConnell took over last January, put budgets on the side-burner once Republicans took control of the House in 2010. In fact, from 2009 through the end of Reid’s tenure as majority leader, the Senate only voted on one budget, for fiscal year 2014. Instead, Reid relied on bipartisan budget agreements such as the one struck last fall to fulfill the prime functions of a budget resolution. The House, on the other hand, has voted on a budget every year that the GOP has been in control, regardless of the balance of power across the Capitol building.

Reid’s actions became a favorite shorthand for what the GOP considered to be his flawed leadership style and drew criticism from prominent Republicans even outside the chamber.

“The president and his party’s leaders continue to duck from the most pressing fiscal and economic challenges facing our nation. Exhibit A of this failure is the fact that today marks 1,000 days without Senate Democrats passing a budget,” said Rep. Paul Ryan (R-Wis.) on the House floor in January 2012, then the chairman of the House Budget Committee. “Having failed to put forward a credible budget plan in 1,000 days, the president’s party is committing America to a future of debt, doubt, and decline.”

A spokesman for Reid’s office did not return a request for comment on the GOP’s rebukes.

Still, the Nevada Democrat did successfully pass budgets when Democrats held both chambers, as Republicans do now. In fiscal years 2008-2010, the Senate not only voted a budget every year, but also conferenced that document with what then-Speaker Nancy Pelosi’s (D-Calif.) House produced.

Largely speaking, budgets are messaging platforms rather than ironclad commitments to follow through on the provisions contained therein. Should federal budgets be balanced? How much money should the government spend on defense programs? On domestic programs?

There is at least one other reason that McConnell may be considering a new budget resolution. Congressional budgets do have some tangible consequences. One is reconciliation, the process that allowed Republicans to circumvent Senate Democrats and land a repeal of the Affordable Care Act on the president’s desk for the first time ever. It takes specific instructions within a budget resolution to trigger this potent mechanism.

GOP leaders may have calculated that it’s worth opening the door to campaign attacks during vote-a-rama if it gives them the ability to take another shot at reconciliation.

“The higher the stakes of any election, the less politicians want to get on record,” said Bonjean. “At the same time, Republicans want to show a series of accomplishments – they have several to point to – but getting through reconciliation can be helpful as well.”

Sen. John Thune (R-S.D.) told reporters last week that if Republicans could agree on how to put the budget tool to use, it would be worth pursuing. “If we could find something we want to use reconciliation for, it could make sense to do that,” he said. “That might shape some of the decisions, too, about the budget process generally.”

Asked whether he was concerned about then holding a vote-a-rama session in a hotly contested election year, Thune sighed. “I think vote-a-rama is goofy, personally. This is one of the reasons I want to reform the budget process,” he said.