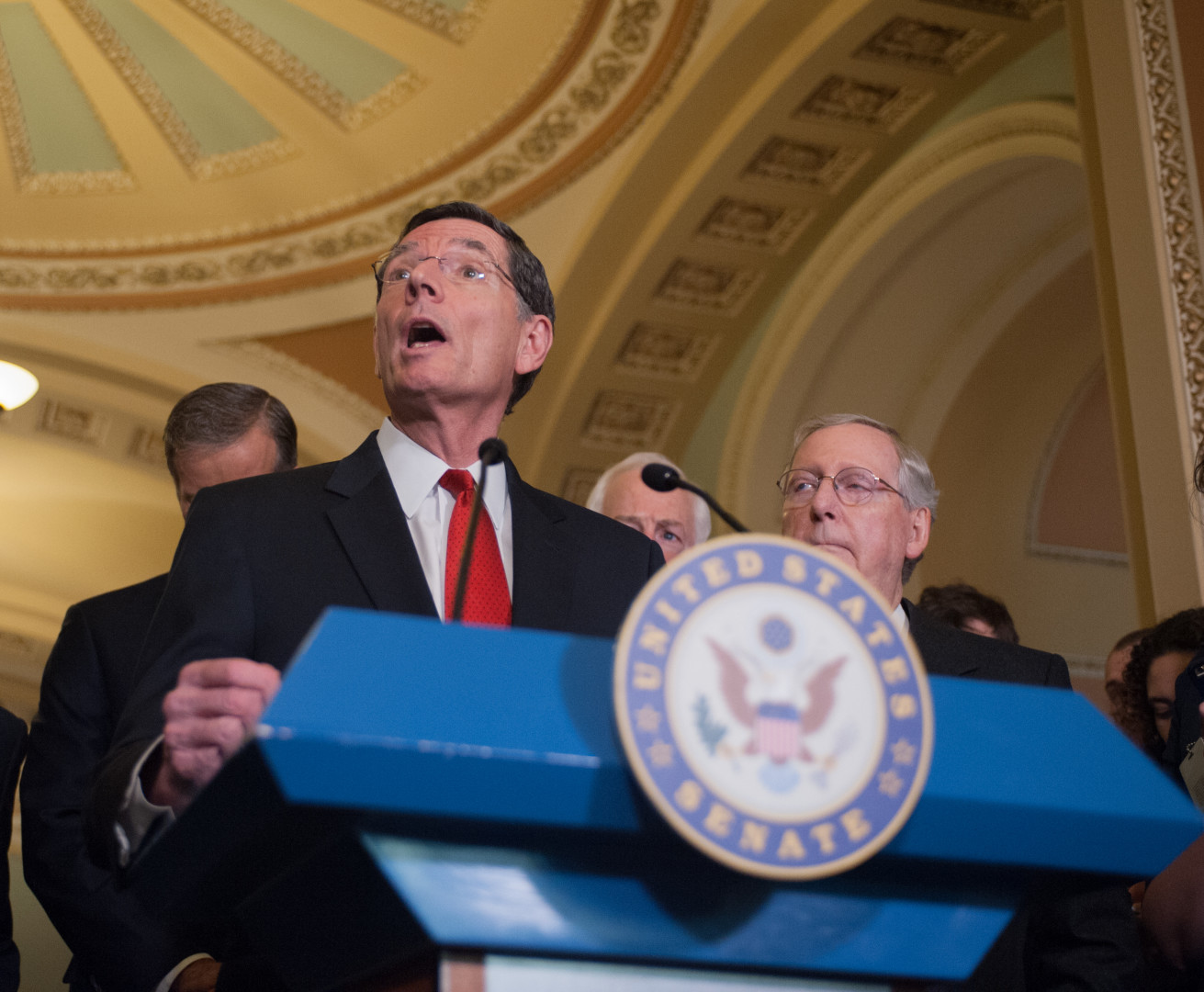 Barrasso has called for amendments to an energy bill that would block the freeze. (Rob Kunzig/Morning Consult)
By Jack Fitzpatrick

The Obama administration’s decision earlier this month to put a three-year freeze on new coal leases on federal land prompted a familiar reaction from Republicans. Conservatives panned the president’s heavy-handedness and warned of job cuts and higher energy costs, while environmentalists praised the eventual cuts to carbon emissions.

It was hardly the first time President Obama angered proponents of the coal industry. Republicans have frequently referred to his “War on Coal,” including Mitt Romney in 2012.

But the actual results of the Department of the Interior’s coal lease announcement are more nuanced than the GOP talking points have indicated. Critics of the decision acknowledge that in the short term, the rule won’t cause Americans to see more expensive or less reliable energy. But the decision could have significant long-term effects, they say, both economically and environmentally.

And perhaps just as important, the coal lease moratorium is one of Obama’s most direct symbolic attacks on coal country. It prompted an immediate political response. Sen. John Barrasso (R-Wyo.) called for amendments blocking the freeze as part of debate on a wide-ranging energy bill that the Senate will consider this week.

The coal lease decision will eventually have a broad impact on the industry. Forty percent of U.S. coal production comes from federal lands, according to the Department of the Interior. From 2005 to 2015, coal accounted for $7.9 billion in federal royalties and $4 billion in other revenues, according to the Bureau of Land Management.

But when the department announced the coal-lease moratorium, it was careful to note that it affects only new leases on federal land, not existing leases. According to conservative estimates, that leaves 20 years worth of coal consumption in the U.S. at sites that are already leased, the agency said.

Opponents of the decision didn’t take issue with the department’s math. Instead, they argued broadly that it’s not the government’s place to issue a blanket ban on new coal leases.

“It will take some time to understand the immediate impacts, but I think it is largely beside the point,” said Matt LeTourneau, spokesman for the U.S. Chamber of Commerce, in an email. “If a company identifies land that delivers more economical production than lands already under lease, they should have an opportunity to mine it. The market should drive these decisions, not an arbitrary moratorium.”

LeTourneau said this particular decision is “part of a larger story,” including two canceled oil-lease sales in Alaska, the Environmental Protection Agency’s Clean Power Plan, the agency’s ground-level ozone regulations, and the State Department’s rejection of the Keystone XL pipeline extension. Taken as a whole, it all “serves to limit America’s ability to produce energy, and we think that is very unwise,” LeTourneau said.

Other arguments against the decision have taken a similarly philosophical tone. At a Senate Energy and Natural Resources Committee hearing last week, Chairwoman Lisa Murkowski (R-Alaska) broadly tied the Obama administration’s stance on energy to the lifting of nuclear sanctions on Iran.

“We will, as a country, tell Iran, go ahead, produce more. While at the same time, we’re going to continue locking up our potential,” Murkowski said, adding that the United States is “continuing sanctions on ourselves.”

For now, the debate over the coal lease moratorium is limited to abstract arguments over what’s fair. But over time it will have a real economic impact. At least 30 mining applications in nine states are being blocked, according to a list compiled by The Associated Press.

And the moratorium’s ultimate impact goes far beyond the companies affected. The end goal of a “keep it in the ground” program is to restrict coal supply enough so that the worldwide price rises, said Matt Frost, an analyst at the consulting firm SRA International. If supply is restricted enough to raise prices, demand for coal will naturally fall, Frost said.

From an environmental perspective, that avoids some of the pitfalls of a carbon-cap program. For example, if the United States manages to limit its own consumption but continues to produce and export coal, other countries are free to burn as much as they like. And if the U.S. isn’t using that coal, prices could drop enough so that it becomes even more economical for other countries to burn more, making the U.S.’s cuts meaningless.

A “keep it in the ground” policy ultimately makes coal less affordable for everyone. “That’s the benefit of restricting the supply,” Frost said. “If you restrict supply, it increases prices.”

With that in mind, Frost floated a free-market idea last year to achieve the same effect as the federal coal lease freeze. (The proposal was unorthodox enough to warrant a story in The Atlantic.) He suggested allowing anyone to lease coal rights on federal land, not just companies that have a plan to start a mine. This small shift, Frost said, would allow wealthy environmentalists like Al Gore or Tom Steyer, who had already committed to spending millions on campaigns to combat climate change, to buy up coal rights simply to stop mining companies from digging up the coal.

This idea would be more effective for environmentalists than entering a super-PAC battle with mining interests. What’s more, the government wouldn’t have to ban mining. It would simply allow private interests to block mining leases if they were willing to pony up the money. “I didn’t think the federal government should be in the business of trying to reduce emissions but at the same time being a fossil-fuel slumlord,” Frost said.

Frost’s plan would only work if wealthy environmentalists entered a real estate bidding war with mining companies. But it also would avoid a “War on Coal” narrative, which has been one of the defining characteristics of Obama’s presidency for the GOP.

Obama doesn’t seem to worry about that. In his State of the Union address, he promised to “push to change the way we manage our oil and coal resources, so that they better reflect the costs they impose on taxpayers and our planet.”

Three days later, the Department of the Interior announced the coal-lease moratorium.

Frost’s proposal illustrates the most controversial aspect of the Obama administration’s moratorium on coal leases. It demonstrates a top-down government approach that leaves little to chance or to the free market.

“My proposal was a little tweak,” Frost said. “I’m not an activist. I’m an analyst. I’m conflict-averse. I’m not one of these people who could walk into one of these coal towns and tell miners they should lose their jobs.”