The Coming Week: No, It’s Not Iowa. It’s Energy and Iran. 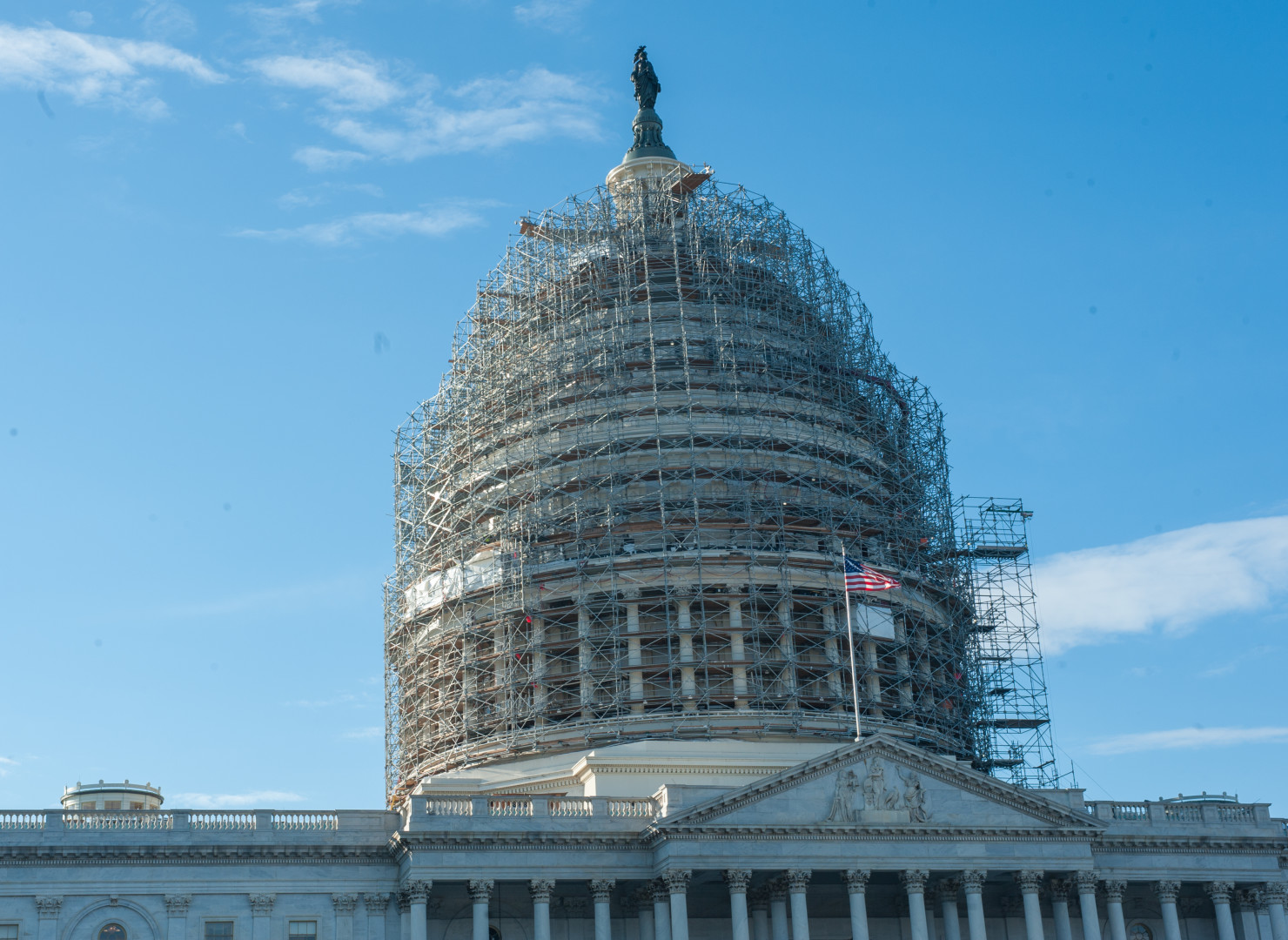 All eyes not obsessing over the Iowa caucuses will be watching a wide-ranging energy bill currently on the Senate floor. Energy and Natural Resources Committee Chairwoman Lisa Murkowski (R-Alaska), who is managing the floor debate, hopes to guide the bill past a medley of amendments that could undermine its bipartisan support, including a measure calling for $600 million to help Flint, Mich., recover from its water crisis.

The Senate will convene at 3 p.m. on Monday and continue working through more than 100 amendments, although Murkowski has said they won’t all get votes. Supporters of several contentious amendments acknowledged they face an uphill battle to garner the 60 votes that will be needed to get their measures on the bill.

Murkowski wrote the carefully negotiated measure with Energy and Natural Resources Committee ranking member Maria Cantwell (D-Wash.), who is managing the Democrats on the Senate floor. The bill would expand liquefied natural gas exports, reauthorize the Land and Water Conservation Fund, and update other energy and efficiency regulations that hadn’t been changed since 2007.

Senators have introduced amendments on an array of contentious topics, which could threaten the bill’s bipartisan support if they can magically garner the 60 necessary votes.

Peters says he and Stabenow are still working with Murkowski to overcome concerns about spending. The $600 million price tag shouldn’t be difficult to offset, but that may not be the only problem for Republicans. Senate Majority Whip John Cornyn (R-Texas) expressed doubt about the underlying philosophy of the proposal on Thursday. He said the federal government should not foot the bill for infrastructure that should be the state’s responsibility.

Other high-profile amendments will struggle to get support. Sen. Orrin Hatch (R-Utah) proposed a measure to block the Department of the Interior’s decision to halt new coal leases on federal land. Sen. Joe Manchin (D-W.V.) said he would support the amendment but expects few other Democrats to get on board. Sen. Bill Cassidy (R-La.) proposed a measure to repeal the Renewable Fuels Standard, but told Morning Consult it might not be considered germane to the bill.

The House, meanwhile, returns to the Capitol after a longer-than-expected break on Monday evening, just in time for the primetime coverage of Iowa results. On the calendar for the week is a vote on GOP legislation to toughen sanctions against Iran, even though the U.S. has already lifted a number of restrictions on the country’s finances to comply with the nuclear agreement.

The House also will hold a vote to override the president’s veto of an Obamacare repeal bill, passed through reconciliation earlier this year. The vote will fail, but it’s intended to finalize the GOP’s strong show of commitment to repealing the health care law.

White House Director of the Office of Management and Budget Shaun Donovan has said the president’s fiscal year 2017 budget will be released on Feb. 9. Despite the canceled workweek due to snow, House budgeters are still looking to mark up their budget at the end of February.

With Senate Democrats struggling to coalesce around a restructuring plan for Puerto Rico, Republicans in both chambers seem to have two key priorities in mind — prevent access to Chapter 9 bankruptcy and install a financial control board.

The House Natural Resources Committee, one of three that has jurisdiction over Puerto Rico, will hold a subcommittee hearing on a financial control board on Tuesday. Anthony Williams, the former mayor of Washington, D.C., and the former CFO of the capital’s own financial control board, will testify. Speaker Paul Ryan (R-Wis.) has set a March 31 deadline for a House Republican plan to address the commonwealth’s debt crisis.

While the rest of the country digests the results from the Iowa caucuses on Tuesday morning, the House Ways and Means Committee will hold its first hearing of the year on pro-growth and anti-poverty policies. Former Congressional Budget Office Director Doug Holtz-Eakin, among others, is set to testify, and the hearing will likely be an opportunity for committee members, led by Chairman Kevin Brady (R-Texas), to put forward their ideas for international tax reform, stopping corporate inversions (a major issue for ranking Democrat Sander Levin of Michigan) and safety-net programs such as the Earned Income Tax Credit.

While few expect a major tax deal during an election year, Ryan has said that he wants to use the year to put forward a GOP vision of governance. That will definitely include a vision for tax reform.

Brady could offer some hints at Republicans’ thinking a day ahead of the hearing. On Monday, he will speak on “U.S. Economic Freedom” at the Heritage Foundation.

Elsewhere in the House, the Financial Services Committee’s Task Force to Investigate Terrorism Financing will hold its first hearing since the San Bernardino attacks on Wednesday. Its focus will be on new anti-money laundering regulations. Given that attackers received a loan from online marketplace lender Prosper days before the massacre, there will likely be some discussion about how to better regulate the burgeoning online banking sphere.

The House Energy and Commerce Committee is holding hearings on 10 bills this week. On Tuesday, members will consider measures related to electricity and natural gas.  The AIR Survey Act of 2015 would allow for aerial surveys — rather than grounds surveys — for reviews of natural gas infrastructure.  The Fair RATES Act would state that if the Federal Energy Regulatory Commission does not block an electricity rate change, it is considered as an approval of the change. Another proposal would specify which utility mergers fall under the FERC’s jurisdiction. The other bills would require the commission to grant extensions on the licenses for five hydroelectric projects: the Clark Canyon Dam, the Gibson Dam, the W. Kerr Scott Dam, the Jennings Randolph Dam and the Cannonsville Dam.

The committee will reconvene Wednesday to talk about two more bills. The Satisfying Energy Needs and Saving the Environment Act (SENSE) Act would change how the EPA enforces emission limits on power plants that convert coal refuse into energy. The Blocking Regulatory Interference from Closing Kilns (BRICK) Act would allow for judicial review of rules on emissions in the brickmaking industry.

The House Natural Resources Committee, meanwhile, will hold a hearing on Tuesday on two bills. One bill would transfer fishery management responsibilities from the federal government to the state governments of New York and Rhode Island in a portion of the sound between the two states. And another bill would remove sea urchins and sea cucumbers that are designated for human consumption from Endangered Species Act protections.

On Wednesday, the Senate Environment and Public Works Committee will hold a hearing on the Office of Surface Mining’s proposed Stream Protection Rule. The committee has not announced who will testify. The same day, the Senate Indian Affairs Committee will hold a business meeting on the Blackfeet Water Rights Settlement Act of 2015, which negotiates water rights for the Blackfeet Indian Reservation of Montana in the St. Mary River Basin and Milk River Basin.

The House Judiciary Committee will venture into delicate territory on Tuesday, as it holds a full committee hearing behind closed doors on the Foreign Intelligence Surveillance Amendments Act. The law permits the attorney general and the director of national intelligence to carry out spy operations abroad.

The bulk data collection program operates under Section 702 of the law. Under it, internet companies send the NSA any communications that match FISA Court-approved search terms. (Under the provision, the NSA can only target non-Americans outside of the U.S.).

Civil liberties groups are unhappy with the committee’s decision to hold the hearing in private. Twenty-five groups, including the Electronic Frontier Foundation, American Civil Liberties Union, the Government Accountability Project and the Center for Democracy and Technology wrote a joint letter to committee leadership urging them to open the hearing to the public.

The hearing features representatives from the Office of the Director of National Intelligence, the Department of Justice, and the Federal Bureau of Investigation.

The House Energy and Commerce Communications and Technology Subcommittee is scheduled to hold a hearing on a slightly less turbulent topic on Tuesday. Members will examine the status of the First Responder Network Authority, otherwise known as FirstNet. Congress created the program under the Middle Class Tax Relief and Job Creation Act in 2012 to put together a public safety broadband network.

The subcommittee will check on the status of that network as well as updates on requests for proposal submitted on Jan. 14.

On Thursday, the postponed Martin Shkreli show is rescheduled to take place in the House Oversight Committee. Although the pharmaceutical bad boy is legally allowed to testify before Congress, it’s unclear whether he’ll show up. It’s also unclear whether he’ll speak if he does show up. Regardless, other drug company heads will be there to make their case as the committee explores the drug price spike.

Also on Thursday, the House Energy and Commerce Health Subcommittee will hold a hearing on the implementation of the Biologics Price Competition and Innovation Act, signed into law as part of Obamacare. The law was intended to create an abbreviated approval pathway for biosimilars, or products “highly similar” to an FDA-approved biologic.

This post was updated to reflect that Douglas Holtz-Eakin will testify before the House Ways and Means Committee.