The Coming Week: Budget Delivered to Not Much Fanfare 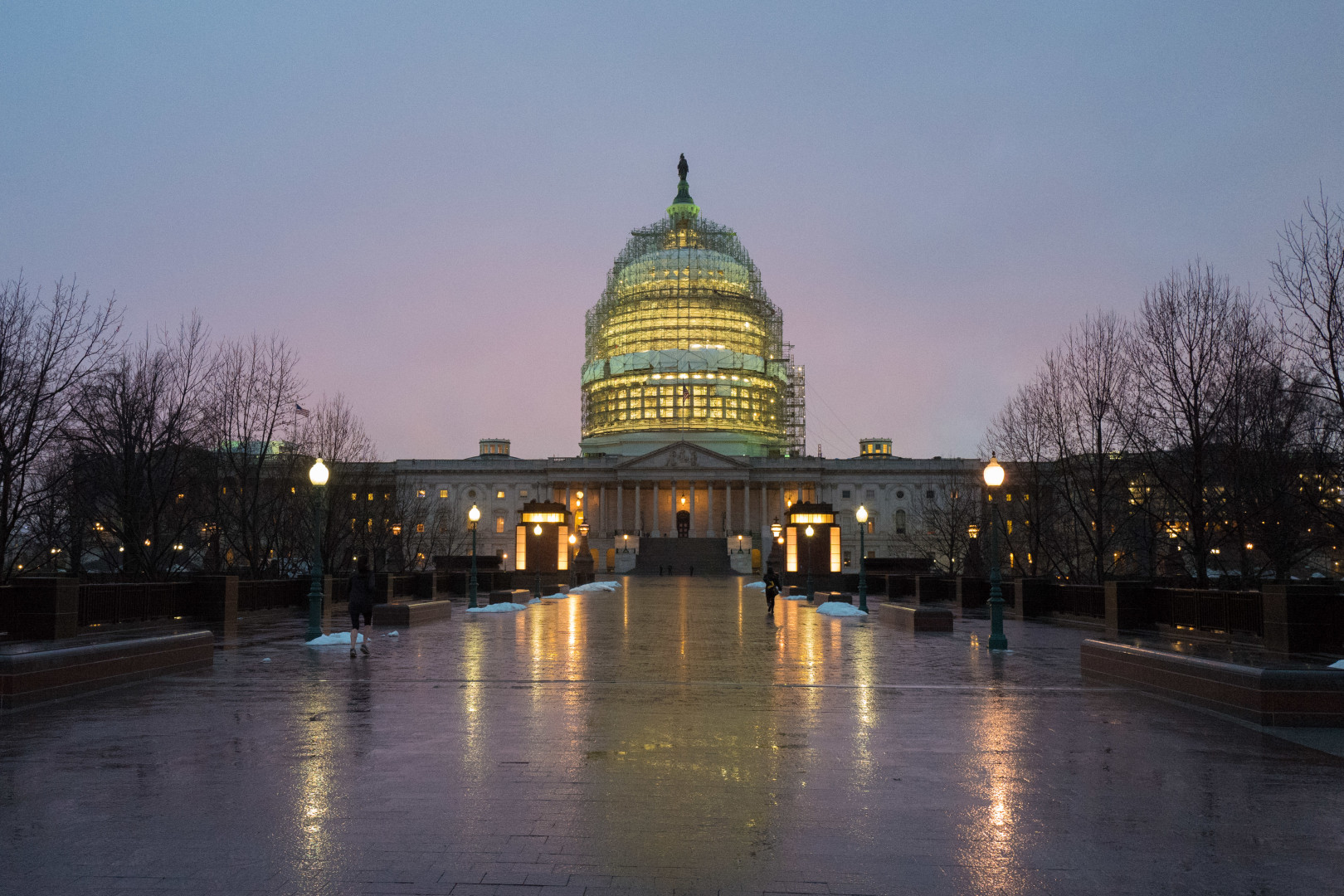 It’s budget week, an annual Washington tradition that offers the administration the opportunity to outline its policy wish lists. Much of those items will remain just wishes.

The White House will deliver President Obama’s final budget proposal to the Capitol on Tuesday, a massive document that will lay out the administration’s spending priorities for the upcoming fiscal cycle.

Not surprisingly, Republicans in Congress are already signaling that they have little interest in Obama’s final fiscal blueprint. When the administration revealed Thursday that Obama’s budget plan would include a proposal to levy a $10-per-barrel fee on oil, House Speaker Paul Ryan (R-Wis.) dismissed it as the wishful thinking.

“This plan is little more than an election-year distraction,” he said in a statement. “It’s dead on arrival in Congress.”

What’s more, the House and Senate budget committees announced Thursday that they would buck tradition and forgo a hearing to review the document with Office of Management and Budget Director Shaun Donovan. Other committees will examine individual parts of the budget, however.

The GOP-led Congress is aiming to make its own budget outline appear earlier than usual this year. In the House, that means marking up a budget in committee in the last week in February and giving it floor consideration in early March. But before that happens House budgeters will have to bring on board a number of fiscal hawks in their conference who are balking at the document’s tentative spending levels.

The committees will spend much of the week parsing the White House budget request. On the floor, House Majority Leader Kevin McCarthy (R-Calif.) says members will vote on bills to ensure that federal science grants are in the national interest, clarify how restaurants disclose caloric content of their food, and require the Treasury Secretary to appear before House and Senate committees in advance of raising the debt ceiling.

The Senate, meanwhile, will turn to House-sponsored legislation to impose new sanctions on North Korea in the wake of a reported nuclear weapons test. It’s also possible that a bipartisan energy bill that all but fell apart Thursday could come up again. But before that happens, lawmakers will have to resolve the dispute that derailed the legislation — how the federal government should respond to the water crisis in Flint, Mich.

The Senate is back in to vote at 5:30 p.m. Monday on a judicial confirmation. The House returns to Washington on Tuesday for a 6:30 p.m. vote series.

Sens. Lisa Murkowski (R-Alaska) and Maria Cantwell (D-Wash.), the two leaders of the Energy and Natural Resources Committee, are angling to get their stalled energy bill back on the Senate floor over the next few days. Disagreements about Flint aid unexpectedly derailed the legislation, which was carefully negotiated among Republicans and Democrats.

After the energy measure failed to garner the necessary 60 votes to proceed to final passage, Senate Majority Leader Mitch McConnell (R-Ky.) said the Senate could return to the bill later. Supporters hope it will be up immediately after a vote on North Korea sanctions.

Democrats refused to allow the energy bill to go forward without an amendment addressing Flint’s water infrastructure. They now say the delay gives them more time to find common ground with Republicans, who are wary of allocating funds to the state before it has a specific plan to use the money. Democrats also must grapple with Republicans who simply don’t think it’s the federal government’s place to get involved.

Michigan Democrats Debbie Stabenow and Gary Peters weren’t happy with Republican proposals that only offered only $50 or $60 million upfront. (They initially proposed $600 million.) One of the Republican proposals also offset the cost by cutting an automotive loan program that Stabenow says helps employ people in Flint.

Although some Republicans such as Senate Majority Whip John Cornyn (R-Texas) oppose federal involvement in Flint on principle, Peters said much of the negotiations now are focused on financial details and not ideological arguments.

Obama’s budget request for a $10 tax on every barrel of oil is sure to get some airplay, even though it stands no chance of passing in Congress. The hike would amount to about a 30 percent tax per barrel at today’s prices, but that’s only because the oil prices are dramatically low. If nothing else, the proposal highlights Obama’s advocacy for higher prices on nonrenewable fuels in the final stages of his presidency.

The Senate Environment and Public Works Committee has two hearings on tap. On Tuesday, the committee will examine the federal and state management of fish and wildlife. On Wednesday, it will hold a hearing on a possible update to the Water Resources Reform and Development Act. The legislation is meant to be passed every two years, authorizing water projects by the U.S. Army Corps of Engineers.

The House Natural Resources Committee will also hold two hearings. On Wednesday, the Subcommittee on Water, Power and Oceans will discuss conflicting federal statutes on endangered fish species. On Thursday, the Subcommittee on Federal Lands will discuss several bills. One would extend the authorization of appropriations for the Historic Preservation Fund, and two others would adjust the boundaries of Shiloh National Military Park in Tennessee and Mississippi and the Petersburg National Battlefield in Virginia.

The White House has already previewed several health-related presidential budget requests ahead of Tuesday’s release, but surprises undoubtedly remain. The budget request will include an extension of the opportunity for states to receive full federal funding for Medicaid expansion for three years. It will also include changes to the Cadillac tax on employer-sponsored health insurance benefits and a request of $755 million for Vice President Joe Biden’s cancer moonshot. It will also include $1.1 billion in additional funding requests to address the opioid epidemic.

Health and Human Services Secretary Sylvia Burwell will make her way to Capitol Hill to discuss the budget in front of the House Ways and Means Committee on Wednesday and the Senate Finance Committee on Thursday.

A slew of health bills will be considered in committees throughout the week. On Tuesday, the Health, Education, Labor and Pensions Committee will mark up seven bipartisan bills related to medical innovation. That committee’s voting session will be the first of three markups on the topic. It is an approach Chairman Lamar Alexander opted to take after the committee failed to strike a bipartisan agreement on a broader bill.

On Wednesday, the Senate Judiciary Committee will hold a hearing on mental health reform, with a focus on Majority Whip John Cornyn’s (R-Texas) bill to make treatment more accessible within the criminal justice system. The hearing could be markedly different from the HELP Committee’s hearings on the topic, with more partisan fanfare. Cornyn’s bill contains a provision modifying the background check system for purchasing guns. Democrats say the language would make it easier for mentally ill people to obtain firearms.

On Thursday, the Judiciary Committee will consider the Comprehensive Addiction and Recovery Act, a bipartisan bill to address the opioid epidemic. Senate leaders says that once that measure gets through committee, it is likely to come to the floor quickly.

In the House, the Energy and Commerce Health Subcommittee will hold a hearing on Wednesday examining Medicaid and the Children’s Health Insurance Program’s federal medical assistance percentage.

The technology community is eagerly awaiting Senate passage of the Judicial Redress Act, which would give Europeans the power to sue U.S. federal agencies if they misuse their personal information. Sen. Orrin Hatch (R-Utah) is aggressively pushing for the measure to be “fast-tracked” on the Senate floor.

The Judicial Redress Act is vital to relations with the European Union when it comes to sharing data. Last year, officials from the U.S. and EU finalized negotiations on the Umbrella Agreement, which would facilitate data sharing between federal agencies on both sides of the Atlantic. However, that deal won’t go into effect until the Judicial Redress Act is signed into law. If the Senate passes it, it will need to be approved by the House before it goes to the White House.

A previous deal, called Safe Harbor, was struck down by a European court after years of deteriorating trust in the American government’s handling of personal data. The news of a fresh deal comes with some uncertainty from all parties. Officials are still typing up the details. Once the U.S. negotiators finish drafting the text, the European Commission and each member state will have to approve the deal.

On another topic, senators in the Armed Services Committee are likely to delve into cyber-related issues at a hearing Tuesday. Director of National Intelligence James Clapper and Director of the Defense Intelligence Agency Vincent Stewart will give testimony on worldwide threats.

Among these threats are likely to be discussions of cybersecurity and the fight against the self-proclaimed Islamic State terror group. ISIS has spurred controversy in the tech world with its use of encrypted messaging platforms and social media to formulate terrorist plots and to radicalize recruits online.

Committee Chairman Sen. John McCain (R-Ariz.) introduced a bill in December that would require the Department of Homeland Security to vet visa applicants through their social media profiles, hoping to catch radicalized individuals before they get to the United States.

The push to use the internet to combat terrorism has seen other measures arise in Congress. The Senate Committee on Homeland Security and Government Affairs is scheduled to mark up the Combat Terrorist Use of Social Media Act on Wednesday. The House passed a similar bill with the same name in December, but the Senate panel is taking up its own version. The bill would require analyses and evaluations of terrorist use of social media with eventual recommendations how to improve the federal government’s response.

The committee is also scheduled to vote on Beth Cobert’s nomination as director of the Office of Personnel Management. At a hearing in the same committee Feb. 4, Cobert pledged to make cybersecurity the highest priority if confirmed. The agency faced public scrutiny after this summer’s massive hack that left the personal data of some 22 million current and former federal employees compromised.

The coming week features four major hearings in the realm of financial services, with both Treasury Secretary Jack Lew and Federal Reserve Chair Janet Yellen making their regularly scheduled appearances before their committees of jurisdiction.

Lew will testify before the House Ways and Means Committee and the Senate Finance Committee on the administration’s budget plan and its tax policy goals for the coming year. Much of the discussion will focus on the future of corporate and international tax reforms, which will likely be centerpieces of Congress’ election year agenda. That’s particularly true in the House, where Speaker Paul Ryan (R-Wis.) and Ways and Means Chairman Kevin Brady (R-Texas) have made tax reform a centerpiece of their “Republican vision of governance.”

The stakes for the administration are somewhat lower in their last year in office. On the tax front, the White House is eager to take some action on corporate inversions, as they are a matter of bipartisan concern. Obama has also said that he would like to work with Ryan on a plan to expand the Earned Income Tax Credit to more working adults by lowering the age of eligibility from 25 to 21 and doubling the maximum benefit. It remains unclear whether such a deal will be possible.

Republicans on the House Financial Services Committee and the Senate Banking Committee will likely hammer the Fed for presiding over a sluggish recovery. Democrats, many of whom are still fuming over the Fed’s December decision to raise interest rates, will probably continue to make the case for low interest rates as a way of aiding fragile job and wage growth.

Republicans will also take the opportunity to urge more congressional oversight of the Fed. Chairman Jeb Hensarling (R-Texas) and Bill Huizenga (R-Ill.) have pushed hard for more transparency with regard to how the Fed determines monetary policy. Yellen will likely acknowledge those concerns while robustly defending the Fed’s independence and insulation from congressional politics.