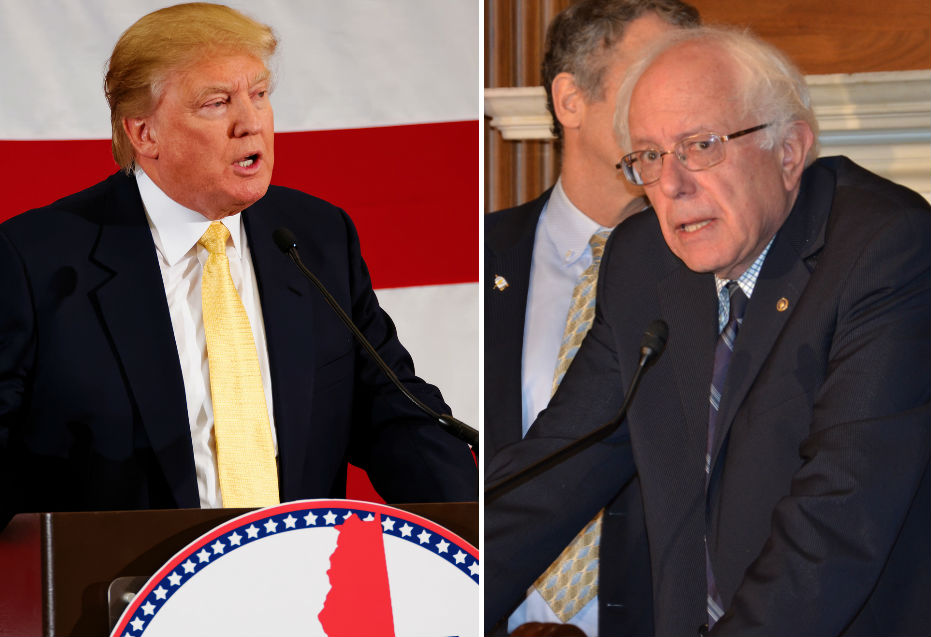 Trump and Sanders rose to new heights in our latest national survey. (Images via Flickr)
By Reid Wilson

Trump, who doubled his nearest rival in Tuesday’s vote, attracts 44 percent of the vote among self-identified Republicans and Republican-leaning independents, the highest level of support he has achieved in a Morning Consult survey.

Trump’s support comes disproportionally from independent voters (47 percent), those who characterize themselves as something other than conservative (47 percent) and those without a college education (49 percent). Nearly half of voters who say their top priority is national security choose Trump as well.

Cruz draws most heavily from conservatives, and from evangelicals. Rubio does best among Republican voters who make more than $100,000 a year; 18 percent of those voters back the Florida Republican.

More than six in 10 Republicans have favorable views of Trump (67 percent), Rubio (62 percent) and Cruz (61 percent), the poll found. Trump’s favorable ratings are largely static, while Republican voters have registered increasingly optimistic impressions of both Rubio and Cruz in recent weeks.

On the Democratic side, former Secretary of State Hillary Clinton wins 46 percent of the vote, just seven points higher than Sanders’s 39 percent — the largest percentage the Vermont independent has ever notched in a Morning Consult survey.

Sanders leads by a significant 55 percent to 36 percent margin among voters between 18 and 29 years old, while Clinton does best among those over 65 years old. Sanders leads among independents, while Clinton holds a 13-point lead among Democrats, results that closely mirror exit polls from Iowa and New Hampshire.

Tellingly, Sanders has seen a boost in the number of voters who see him favorably, especially among Democrats. More Democrats now say they see Sanders favorably, 78 percent, than those who say the same of Clinton, 75 percent. Until now, Clinton has enjoyed an edge in favorable ratings among her party’s voters.

Sanders is the only candidate in the field, in either party, who is seen favorably by a majority of voters.

But Sanders must still make inroads among non-white voters, who play increasingly large roles in states next up on the nominating calendar such as South Carolina, where more than half the Democratic electorate will be African American, and Nevada, where Hispanics dominate. Clinton leads among black voters by a 63 percent to 26 percent margin, and among Hispanics by a 52 percent to 44 percent edge.

Both Sanders and Trump saw significant gains after their wins in New Hampshire. Trump’s support jumped six points, from 38 percent in a tracking poll conducted before New Hampshire voters went to the polls; Sanders edged up two points, while Clinton’s support fell four points, from 50 percent.