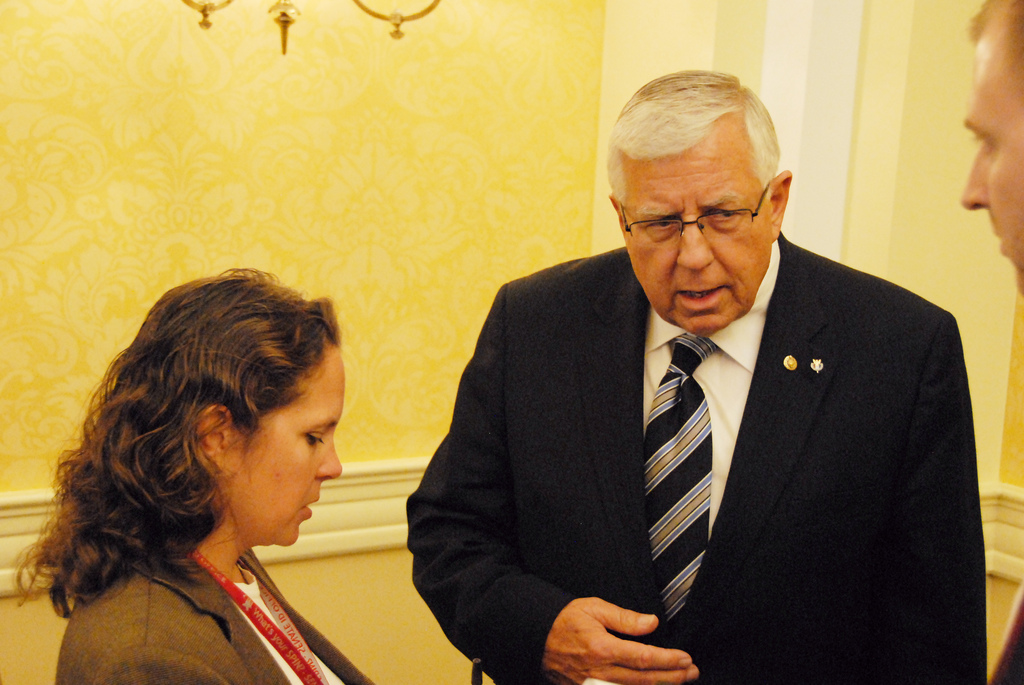 Enzi got what he wanted Wednesday. (Image via Flickr)
By Will Dobbs-Allsopp

The Wyoming Republican’s office said Wednesday the U.S. Government Accountability Office has agreed to conduct a study into how much federal agencies spend on media relations and advertising, which the nonpartisan Congressional Research Service pegged at nearly $900 million in fiscal year 2013. The Wyoming chairman sent a letter requesting the GAO report earlier this month.

The issue has been an ongoing concern for Enzi. In October he sent a letter to Shaun Donovan, the director of the administration’s Office of Management and Budget, requesting a similar breakdown of executive branch public relations spending. OMB has not fulfilled that request, Enzi’s office said, and as a result he turned to the GAO.

The 2014 CRS report noted that quantifying the government’s advertising expenditures is difficult because there is no federal definition of what constitutes advertising. The author, CRS analyst Kevin Kosar, said there are “few government-wide restrictions on government advertising” and those that exist pop up sporadically. For instance, the Department of Defense, which the report said was the federal entity that at $419 million spent the most on public affairs in fiscal year 2013, cannot use appropriations to pay for ads by department contractors.

Part of the problem is that the public has a conflicted view on government-sponsored media campaigns. At what point do relatively uncontroversial efforts at informing the public (for example, signs in national parks that encourage common-sense fire safety) cross the line into partisan messaging or even propaganda? Are federal ad campaigns about the Affordable Care Act good-faith attempts to educate consumers about a complex law or cynical attempts to promote only one side of a divisive issue? The answer probably lies in the eye of the beholder.

Plus, the report notes, government advertising can be as susceptible to the temptation of a snazzy line as commercial marketing. For instance, a 2000 GAO report conducted at the behest of former Sen. Phil Gramm (R-Texas), then the chairman of the Senate Banking Committee, focused on an ongoing controversy about the new dollar coin set to replace the Susan B. Anthony coin that was leaving circulation. The U.S. Mint had promoted the coin, which featured Sacagawea, as the “Golden Dollar,” an allusion to its color, even though the coin itself would not contain the actual metal gold. Yet the report found that 13 percent of the approximately 120 million Americans who had heard about the new coin thought it contained gold, and a further 27 percent did not know or were not sure.

There is no central authority that collects data on federal advertising expenditures, which is why the 2014 CRS report used the Federal Procurement Data System to arrive at its spending estimates. But that database doesn’t include in-house expenses, in essence, agency resources spent on public relations that aren’t contracted to outside firms. That’s part of the reason why Enzi wanted the new GAO study done. The expected report would aim to examine in-house costs, Enzi’s office said.

But identifying how government departments engage with the public is really part of a larger endeavor for Enzi. He plans on putting together legislation to overhaul the federal budget process later this year, partly because he thinks the current process is broken, but largely because he doesn’t believe lawmakers have enough time built into the legislative calendar to do proper oversight.

The overhaul proposal could, for example, include plans to shift Congress over to some version of a biennial budget in order to free up committee time and effort.