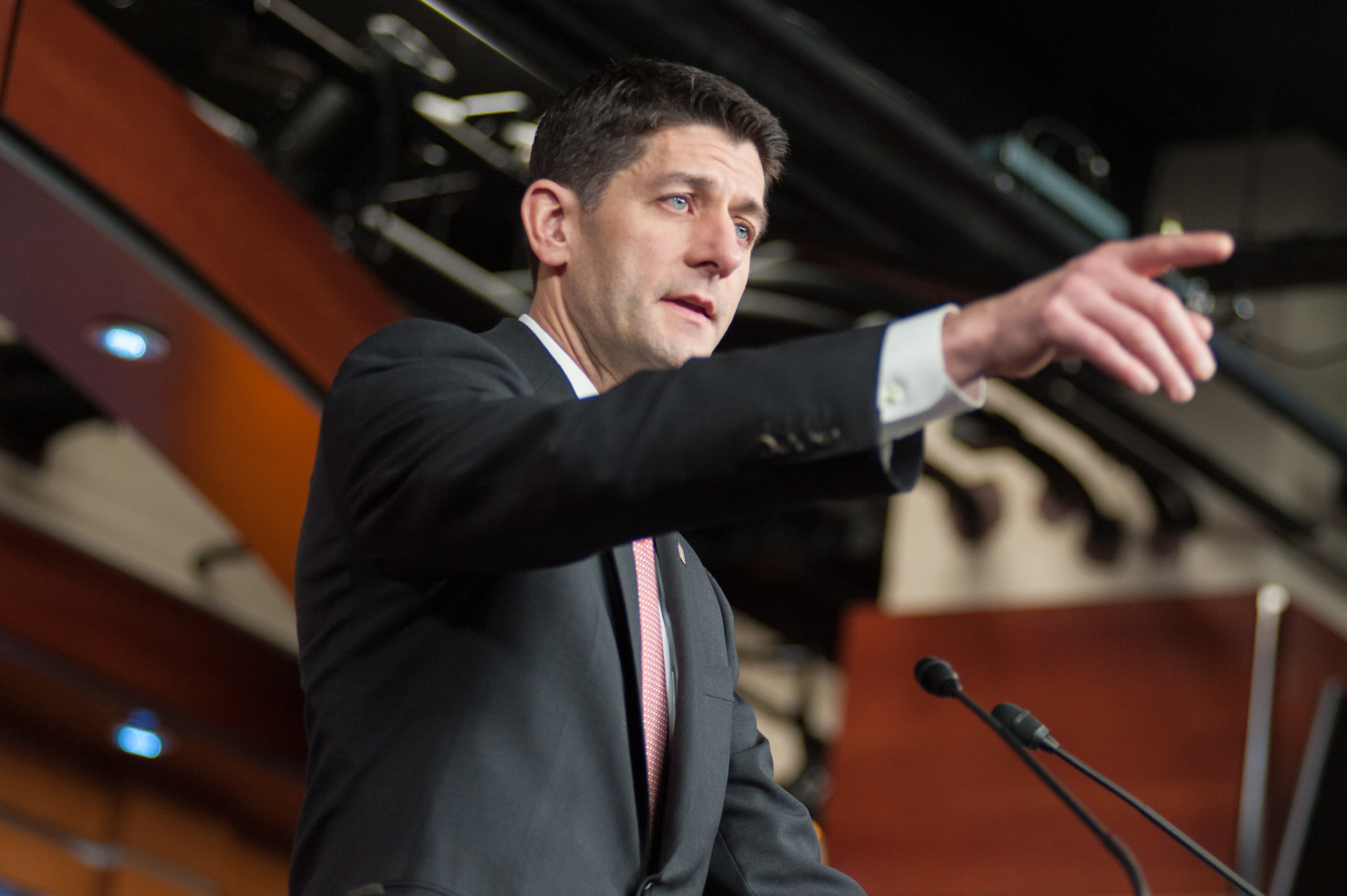 Ryan is taking aim at poverty. (Rob Kunzig/Morning Consult)
By Will Dobbs-Allsopp

Just because Paul Ryan is now House speaker doesn’t mean he’s leaving behind the entitlement policies he championed as Budget Committee chairman. Some observers on the left worry that his ideas might take hold before Democrats have a chance to respond.

Since becoming speaker, Ryan (R-Wis.) has been relentless in setting a single objective above all others — transition House Republicans from being an “opposition party” to becoming a “proposition party.”

Central to that ambition is an agenda-building effort, which Ryan and his leadership team are calling “A Confident America.” The goal is to produce legislative proposals that will form the bedrock of a national GOP policy platform this fall, both for an eventual presidential nominee and congressional candidates.

The endeavor has been delegated to task forces, or “buckets,” to use a favorite analogy of House Majority Leader Kevin McCarthy (R-Calif.). Led by coalitions of committee chairmen, the working groups have been charged with seeking member input on a range of issues from national security and health care to poverty and the economy. While nobody expects any GOP proposals to get far during the last year of President Obama’s tenure, the intent is to paint a sharp contrast for American voters about where a Republican president could take the country.

“Our number one goal for next year is to put together a complete alternative to the left’s agenda,” Ryan says in a snazzy video headlining the task force website.

Leadership aides say House members’ attendance at open mic policy forums so far has been good. The number of task forces has now grown because of the interest. For example, the regulatory burden group has been split in two, one task force for energy regulations and another for financial rules.

The brainstorming sessions will continue over the next several weeks, with a forum for each of the regulatory groups scheduled for Tuesdays. On Wednesday, the tax reform and national security groups will host their first ideas sessions.

Democrats are so far unimpressed. Rep. Barbara Lee (D-Calif.), who chairs a House Democratic group on poverty that was established in 2013, said in an interview that Democrats have been out front on issues such as combating poverty. The first Republican task force, rolled out last week, was on poverty.

“The Republicans would not be talking about poverty if it weren’t for the Democrats and what we’ve been doing,” she said. “From the limited information available so far, she added, the GOP effort is tracking closely with proposals put forward in previous Ryan budgets. Democrats protested those proposals to tie various benefits to individuals’ wealth, saying it would cut safety nets for everyone.”

Democratic aides point out that creating a task force has historically been beltway jargon for lots of talk and little action. Seven task forces makes no difference. “This is all process,” said Drew Hammill, a spokesman for House Minority Leader Nancy Pelosi (D-Calif.). “It remains to be seen if any realistic action comes from any of these efforts.”

Another senior Democratic aide added that given the tumultuous GOP presidential primary, last fall’s intra-conference feuding, and ongoing disputes over a budget, it seems “highly unlikely” that House Republicans can reach consensus on issues like poverty or health care.

House Democrats say they have no plans to coordinate a response to the GOP task forces, aside from the already existing Democratic poverty group.

But not everyone agrees with them that Ryan’s task forces represent classic Washington putzing.

Take for example the GOP poverty task force. Co-chaired by the Republican leaders of five major committees, the task force held an open policy forum for GOP members last week and published a broad-strokes mission statement online. Their aim is to have a fairly specific agenda, be it legislative text or a white paper, by late spring. Ideas floated in the brainstorming session touched on issues from the criminal justice system to tax credits to federal welfare programs, according to aides present for the discussion.

Left-leaning interest groups are already wary. “We have our concerns, right?” said Maya Rockeymoore, a former chief of staff to Charlie Rangel (D-N.Y.) and now the president of Global Policy Solutions, in an interview. “The fact of the matter is that inequality has gotten dramatically worse in our nation and is exceptionally bad for the people at the very bottom.”

“Going into negotiations with Republicans around poverty, [Democrats] hold the high ground,” she continued. “And they should have the arguments ready to make the case that there should be no compromise about how these programs are structured.”

Rockeymoore is already preparing to encourage Democrats to stand their ground. That’s because people such as Douglas Holtz-Eakin, president of the center-right American Action Forum, say Republicans have an opening to address chronic poverty because Democrats haven’t put forward any new solutions. As a result, he believes that the GOP could have a chance to define the issue when legislating begins in earnest next year.

“I certainly believe that Republicans are doing this because they think it gives them both a messaging and a substantive advantage,” said Holtz-Eakin, a former director of the Congressional Budget Office. “I haven’t seen any new ideas come out of the Democratic side for quite some time.”

Ryan’s office is expected to be intimately involved in shaping the poverty agenda, welfare policy advocates across the political spectrum say privately. But a GOP leadership aide cautioned that while Ryan has been a long-time advocate on the issue, the task forces will be driven from rank-and-file members. “He’s not going to predetermine anything,” the aide said.

“I think the speaker has certainly done a good job leading on the issue,” Scott said in a recent interview, nothing that he has spoken with Ryan specifically about the poverty task force a week earlier. “He’s going to be consistent about working on the issue because he has a lot of passion about it. So that’s good news.”

In 2014, while chairing the House Budget Committee, Ryan authored an ambitious proposal to reform the safety net titled “Expanding Opportunity in America.”

Within his 2014 budget outline was a proposal that came to be known as the Ryan Opportunity Grant. It is a pilot program aimed at consolidating federal welfare programs into a single funding stream that would then be handed over to the states. Ryan and his Republican supporters argued that the proposal leveraged the best traits of both levels of the federal system — the vast resources of the federal government and the on-the-ground expertise offered by state and local officials and organizations.

Critics of Ryan’s plan on the left argue that states have a bad record of taking control of federal funds, often choosing to divert state funds previously spent on poverty initiatives to plug other budget gaps once the disbursement of federal money is within their jurisdiction.

Despite that and other divergences, the idea is ripe for bipartisan compromise. For example, both Ryan and President Obama agree that expanding the Earned Income Tax Credit for childless adults would be an effective way to combat poverty.

“Frankly, I’m glad that the Republican Party is deciding to create a poverty task force,” said Rockeymoore. “We think there are some ideas we have that they would find of interest from their ideological framework.” But so far, she added, outreach has been minimal. “That door has not yet been opened.”

Still, Ryan’s staff has had one meeting with Rockeymoore’s team that focused on closing the racial wealth gap, according to her office. He has not accepted an invitation to speak at their upcoming summit, however.

Of course, no matter how much time, energy, or even bipartisan effort goes into the task forces, the tumult of this year’s elections may render the entire agenda project irrelevant.

In a shot aimed at GOP presidential frontrunner Donald Trump, Ryan expressed frustration Tuesday about the contrast between his vision for House Republicans and the chaotic GOP primary playing out before his eyes.

“This is the kind of moment where we should be having a serious debate about the policies needed to restore the American idea,” Ryan said in an unusually blunt, unprompted statement. (He normally tries to avoid commenting on his party’s nomination contest.) “And instead the conversation over the last few days has been about white supremacist groups.”

Update: This story has been updated with further information about Speaker Ryan’s outreach to Global Policy Solutions.