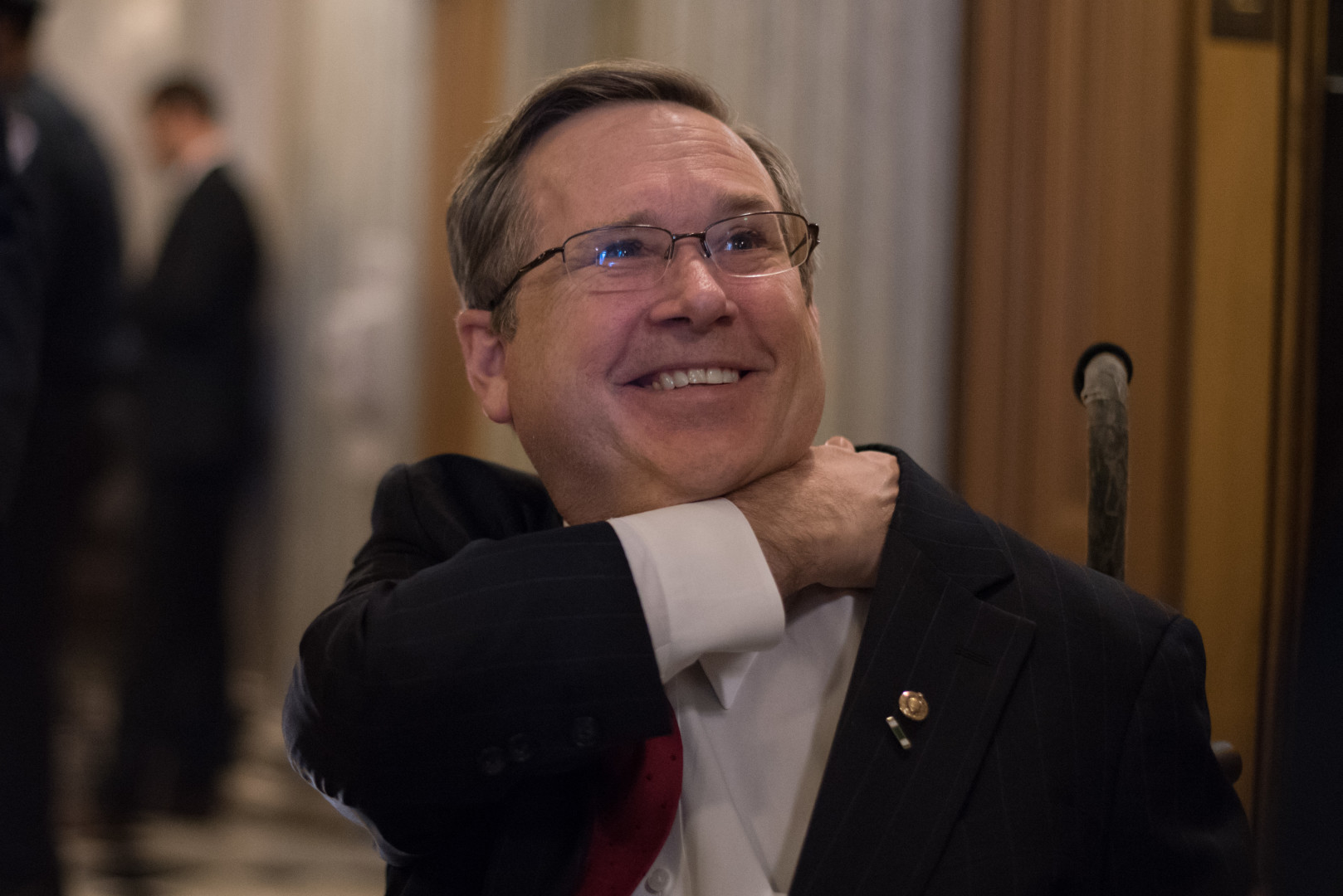 Kirk should cruise Tuesday, but has an uphill climb to November. (Rob Kunzig/Morning Consult)
By Reid Wilson

When voters in five states take their chance to weigh in on the presidential nominating contest on Tuesday, they will also offer the next in a series of hints about the electorate’s overall mood, and their willingness to kick more bums out of Washington.

Related: What’s At Stake on Winner-Take-Tuesday

Voters in Ohio, Illinois and North Carolina will choose party nominees in key races ahead of November’s general election. While the tumult on display in both the Democratic and Republican presidential contests promises to continue for months to come, the same blowback against party leaders has failed to emerge at the local level, so far.

In Illinois, Republicans are poised to renominate Sen. Mark Kirk, while polls show Democrats have settled on Rep. Tammy Duckworth ahead of one of the most competitive Senate contests in the country. Kirk will face a difficult path to a second term in heavily Democratic Illinois, six years after beating a fatally flawed rival.

Related: The 15 Most Vulnerable Senators

Democrats will also choose nominees in two competitive House races. In Chicago’s South Side, Rep. Bobby Rush faces his first real challenge since beating a lowly state senator named Barack Obama; Rush is likely to survive, but Alderman Howard Brookins has had the money to send out mailers introducing himself around Rush’s district.

North of the city, Democrats are choosing a candidate to fill Duckworth’s House seat. The three-way race pits Villa Party Village President Deb Bullwinkel against state Sen. Mike Noland and businessman Raja Krishnamoorthi, who ran and lost to Duckworth in 2012. Krishnamoorthi has run ads making light of his hard-to-pronounce last name. The winner will be favored against DuPage County Commissioner Pete DiCianni (R) in November.

Democrats also get the chance to pick a nominee in the 10th District, where Rep. Robert Dold is one of the more endangered Republicans in the country. Former Rep. Brad Schneider wants his old seat back, but he has to get past Highland Park Mayor Nancy Rotering first; in an unusual turn, Sen. Dick Durbin endorsed Rotering over Schneider ahead of the primary.

Downstate, Republicans will choose between Rep. John Shimkus and state Sen. Kyle McCarter. The Club for Growth has run ads against Shimkus, while the incumbent has attacked McCarter; the American Action Network, a group with close ties to House GOP leadership, has spent a six-figure sum for Shimkus.

In Ohio, Republicans will take one more step toward filling former Speaker John Boehner’s western Ohio seat when voters choose between a crowded field of 16 candidates. Observers are hard-pressed to pick a favorite, though the top three finishers are likely to be state Sen. Bill Beagle, state Rep. Tim Derickson and businessman Warren Davidson. Conservative groups have run ads backing Davidson, though Beagle represents the largest portion of the district, based around Dayton.

The winner will be the heavy favorite in the June 7 general election against Democrat Corey Foister, Green Party candidate Jim Condit and Libertarian Bob Coogan.

Rep. David Joyce is the only incumbent Ohio Republican who may need to break a sweat tomorrow. Joyce faces former state Rep. Matt Lynch, who challenged him in 2014; FreedomWorks has spent on a digital campaign backing Lynch, but that spending has been swamped by big spending from the Chamber of Commerce, the American Hospital Association and a PAC run by former Rep. Steve LaTourette (R), who used to hold the seat, all on Joyce’s behalf.

North Carolina voters will face perhaps the most confusing ballot in the country on Tuesday. The ballots will include primary elections for the state’s 13 House seats, but the results won’t count, after a federal court ruled two of the districts unconstitutional. Candidates will run under newly drawn lines in a special Congress-only primary on June 7.

Tar Heel voters will get the chance, however, to pick nominees for statewide offices. Gov. Pat McCrory (R) and Attorney General Roy Cooper (D) are on a collision course in the most-watched gubernatorial matchup of the year. State Sen. Josh Stein, a rising Democratic star, is likely to cruise to his party’s nomination to replace Cooper as attorney general; he will face the winner of a primary between state Sen. Buck Newton (R) and Forsyth County District Attorney Jim O’Neill (R).

And Sen. Richard Burr will learn the identity of his general election opponent, assuming he outpaces three poorly funded Republican rivals. National Democrats have lined up behind former state Rep. Deborah Ross, though she faces three other Democrats on Tuesday.