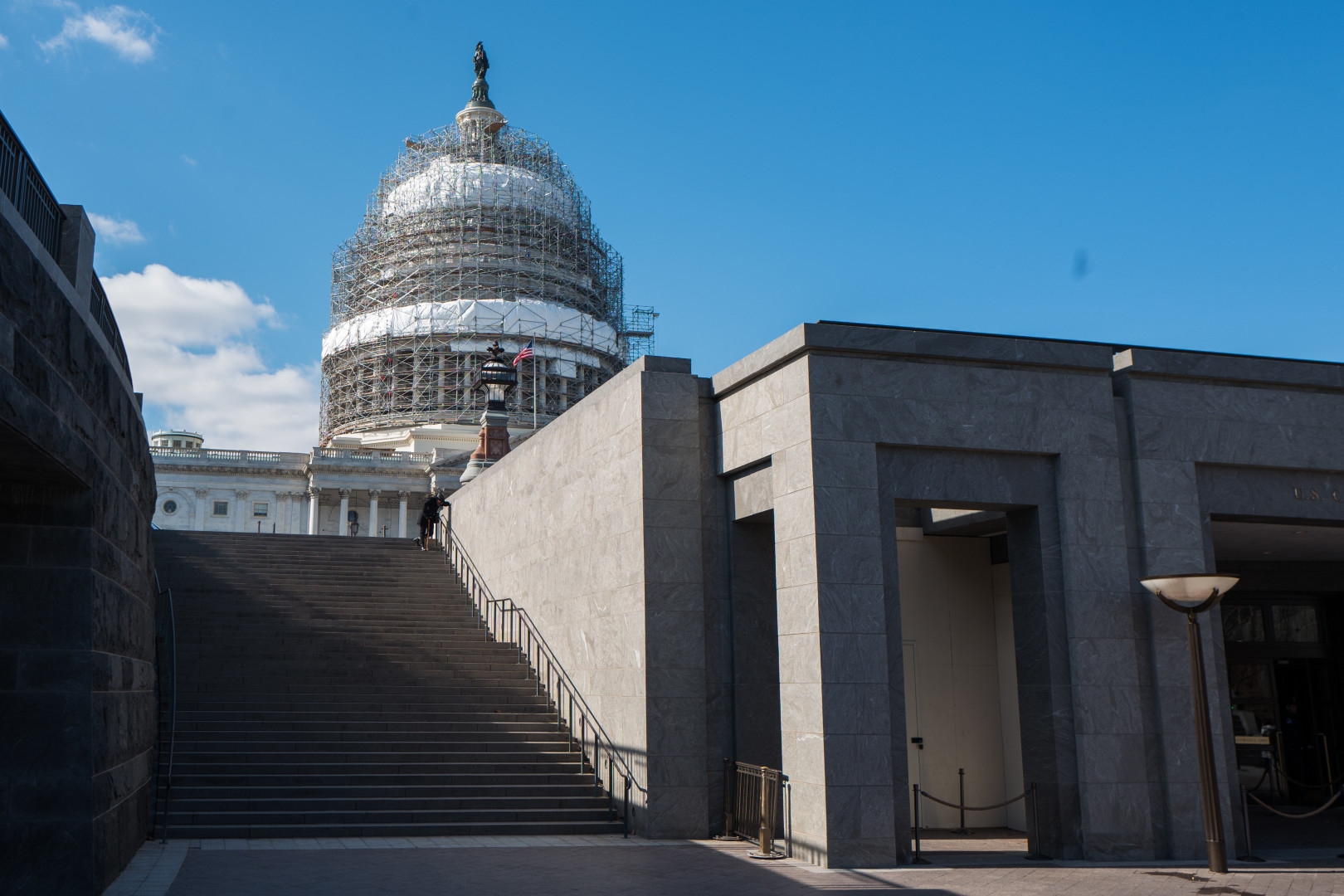 Voters in Arizona will head to the polls on Tuesday to continue the primary election contest pointing toward Donald Trump as the Republican nominee and Hillary Clinton as the Democrats’ choice. Utah and Idaho will also hold caucuses on Tuesday, although in Idaho, the caucus is only for the Democrats. For Republicans, both Utah and Arizona are winner-take-all when it comes to delegates.

In Washington, meanwhile, it will be a light week. The House has an abbreviated session ahead of Easter weekend, and the Senate is out of town until April.

The House will not consider a GOP budget before it’s spring break, House Majority Leader Kevin McCarthy (R-Calif.) said Thursday. That means that the earliest a budget could be adopted by that chamber would be in April. After Wednesday, the House will be on its own spring break until April 12. (An informal rule among members is that a budget deal should be wrapped up by April 15, which, in theory, gives appropriators time to write actual spending bills.)

It is largely a symbolic threshold for House conservatives, who believe the true drivers of the national debt are mandatory spending programs. But they know any entitlement cuts would be dead on arrival in the Senate, and so have chosen the discretionary spending number as their battleground, barring an elusive guarantee of mandatory savings. If lawmakers can’t trim the budget by $30 billion, they argue, what hope exists that Congress will ever rein in growing deficits?

Reneging on the fall budget agreement would allow Democrats to cry foul and shut down the year’s appropriations process. Plus, GOP defense hawks are barely satisfied with the increased funding they got in last year’s deal, meaning that a $1.04 trillion budget plan would likely face as much, if not more, opposition within the House GOP conference as Price’s current blueprint.

To nobody’s surprise, the outspoken House Freedom Caucus voted internally to oppose Price’s resolution, all but ensuring House leaders will fall short of mustering the votes for adoption. Still, talks are ongoing, and the punt until April gives negotiators further time to somehow reach a compromise.

If the House does not adopt a budget, GOP leaders could always revert to a deeming resolution, which would allow appropriators to start writing spending bills to the $1.07 trillion number. Such a move, however, would be a last resort for Speaker Paul Ryan (R-Wis.). The only way it would pass would be with the support of House Democrats and only a handful of GOP members.

The Senate is out for the remainder of the month. But by tapping Merrick Garland to fill the Supreme Court seat of the late Justice Antonin Scalia ahead of the two-week break, President Obama ensured that senators will return to their home states with the issue fresh in the minds of voters. Both GOP and Democratic groups are mobilizing for ambitious media campaigns during recess.

The House returns for votes at 6:30 p.m. on Monday. Amid a number of uncontroversial bills, lawmakers will take up H.R. 2745, the SMARTER Act, which would amend how the U.S. Attorney General’s office and the Federal Trade Commission interact in considering mergers and acquisitions.

After being grilled by the House Oversight Committee over the Flint, Mich., water crisis, Environmental Protection Agency Administrator Gina McCarthy will keep making the rounds in Congress. On Tuesday, she will testify about the EPA’s requested fiscal 2017 budget to the House Appropriations Committee and the House Energy and Commerce Committee.

A House Science Committee hearing will also focus on the EPA, although no representative from the agency is set to testify. A hearing on Wednesday will focus on the Regional Haze Program, which the committee calls, “Regulations Without Visible Benefits,” in the title of the hearing.

On Wednesday, the House Oversight Committee will hold a hearing about the Bureau of Land Management’s leasing of public lands. The event could feature a showdown over the Department of the Interior’s decision earlier this year to halt new coal leases on federal land.

While the Senate is out of session, it’s anybody’s guess whether there will be progress on a wide-ranging Senate energy bill and its accompanying bill to help repair the water infrastructure in Flint, Mich., and other cities with lead pipes. Sen. Mike Lee (R-Utah) is still holding up the Flint bill, as is Sen. Bill Nelson (D-Fla.), who has a problem with a portion to allow offshore drilling, which he has said is non-negotiable.

On Wednesday, the Supreme Court will once again examine Obamacare’s contraceptive mandate in Zubik vs. Burwell. The case will re-examine the question of how far the government must go to accommodate religiously affiliated employers.

The case follows the court’s Hobby Lobby decision in 2014, which ruled that for-profit employers could object to the requirement that contraception be covered by employers’ insurance plans. In Zubik, the plaintiffs argue the requirement violates the Religious Freedom Restoration Act by forcing religious nonprofits to act in violation of their beliefs.

Currently, religiously affiliated nonprofits and “closely held” for-profit organizations can receive an accommodation under the law. This is different than an exemption, which houses of worship have. The difference is that under an exemption, workers don’t have birth control coverage at all. Under an accommodation, the employer doesn’t have to pay for the birth control coverage, but workers can still receive it.

The plaintiffs argue that through the process of opting out of contraceptive coverage for their employees, they are complicit in something they find morally wrong, which violates the religious freedom law.

With the death of Justice Antonin Scalia, a conservative, the best the plaintiffs can realistically hope for is a 4-4 decision. However, Justice Anthony Kennedy, who sided with the majority in Hobby Lobby, has previously indicated he believes the current workaround is sufficient, meaning it’s likely the law will remain intact as written.

With the Senate out, staffers will continue to negotiate two separate bills on mental health and medical innovation packages with hopes of bringing each to the floor sometime after recess. In the House, the Oversight and Reform Committee will hold two hearings on Tuesday — one on the nation’s opioid epidemic, and the other on the challenges of advancing health information technology.

On Wednesday, the House Appropriations Committee will hold a hearing on the budget for the Centers for Disease Control and Prevention. CDC Director Thomas Frieden will testify.

The House will also continue its efforts to pass a budget. The proposal introduced last week reduces the deficit largely through health care cuts, but does so at the cost of stripping some 35 million Americans of their health coverage.

The House has a host of tech-related hearings on Tuesday in a light legislative week.

The House Energy and Commerce Communications and Technology Subcommittee will hold an oversight hearing on the Federal Communications Commission. FCC Chairman Tom Wheeler is expected to testify.

Subcommittee Chairman Greg Walden (R-Ore.) expects the FCC’s proposed broadband privacy rules to be discussed at that hearing. “I’m sure that issue, because it seems to lack some clarity, will be a topic,” Walden said. He added that the FCC’s order to modernize the Lifeline phone subsidy program to include internet access subsidies would also be a topic of interest on Tuesday.

Both the Lifeline update and proposed broadband privacy rules are up for votes at the FCC’s upcoming meeting on March 31.

Walden also said the panel is likely to address an important question about the complex market for buying and selling airwaves.

An FCC spokesman said Friday the auction would proceed on schedule. The immense spectrum auction is scheduled to begin March 29. The FCC will buy swaths of airwaves from broadcasters in a first round, and then subsequently sell those bands of airwaves to wireless companies.

Also on Tuesday, cyber defenses are likely to come up at two hearings in the House Armed Services Committee. In the morning, the panel will look over the Defense Department’s 2017 budget proposal with witnesses Defense Secretary Ash Carter and Joseph Dunford, the chairman of the Joint Chiefs of Staff.

Cybersecurity conversation is almost guaranteed in the committee’s afternoon hearing about the 2017 budget governing information technology and cyber programs. That hearing will feature testimony of the Department of Defense’s chief information officer and chief management officer.

The FCC’s informal shot clock to review and decide on whether to approve the Charter Communications takeover of Time Warner Cable and Bright House Networks is coming to an end. The 180-day window officially ends on Thursday, but FCC staff say there is leeway in making its decision, particularly if there is a public interest reason to delay.

The House is likely to adjourn for its spring recess without voting on an aid package for Puerto Rico, bypassing a self-imposed deadline from Speaker Paul Ryan (R-Wis.). Minority Leader Nancy Pelosi (D-Calif.) said Thursday that Republicans were negotiating with Democrats “in good faith.”

But, she added, the deal won’t be done by the end of the month.

Puerto Rico Gov. Alejandro García Padilla says he wants to see Congress act on a debt restructuring bill that at the very least provides the island with a reprieve from debt litigation before a financial control board starts overseeing the commonwealth’s finances.

On Tuesday, the House Ways and Means Subcommittee on Tax Policy will hold a hearing on “Fundamental Tax Reform Proposals” that will focus on cash-flow and consumption-based tax provisions.

Subcommittee Chairman Charles Boustany (R-La.) says he is working on international tax reform legislation that would likely receive the backing of GOP leadership. But the panel’s hearing announcement indicates that Tuesday’s event will have a more general focus.

On Tuesday, Treasury Secretary Jacob Lew will testify before the House Financial Services Committee on the state of the international financial system. The Housing and Insurance Subcommittee will also hold a hearing on how federal regulations impact the cost of housing.

The Financial Stability Oversight Council will hold a telephone meeting on Monday to discuss its work on asset management.

The meeting will be held in a closed session.

The FSOC last met on March 2, when it voted to keep MetLife Inc.’s designation as a systemically important financial institution.