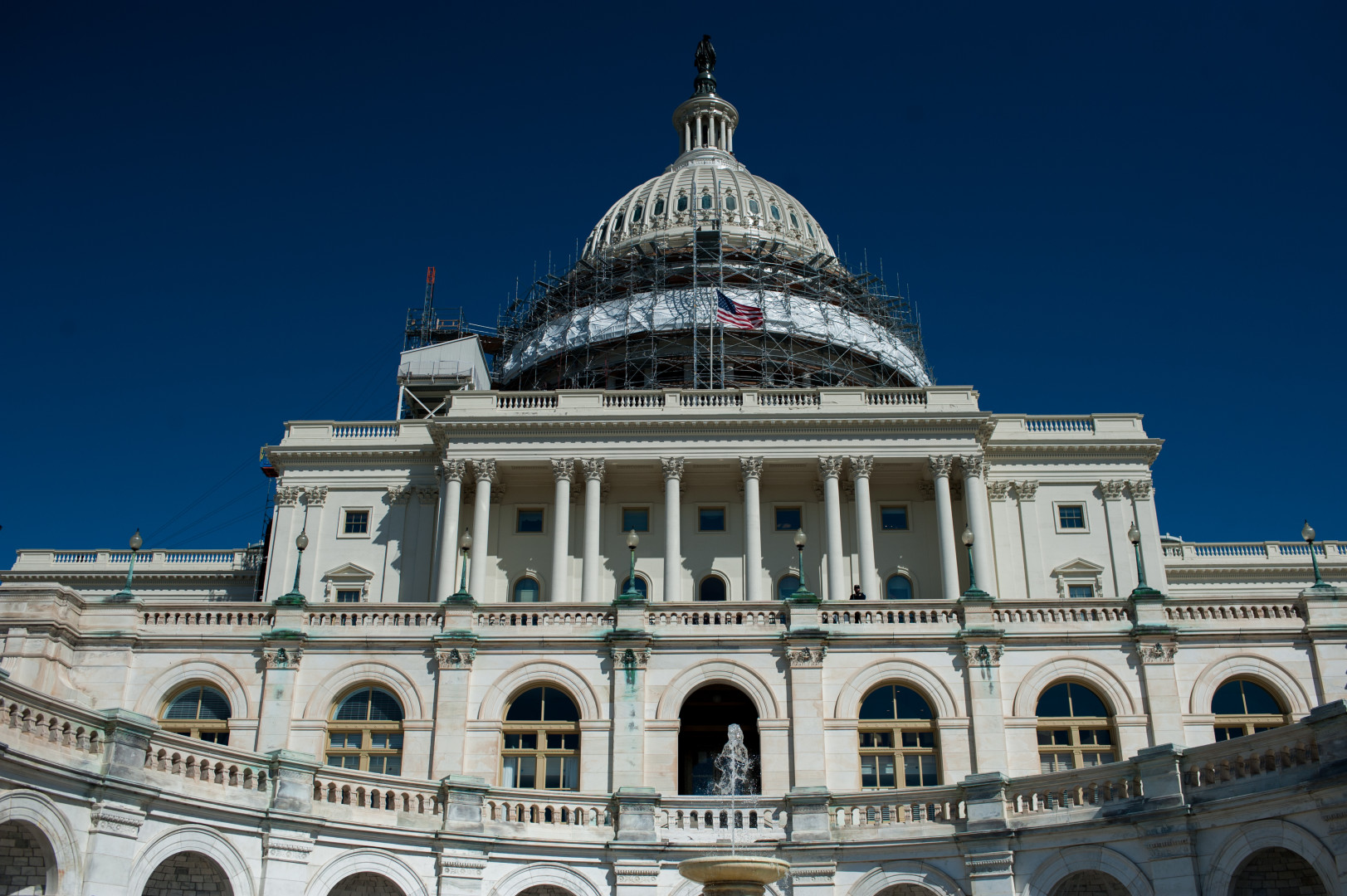 As the presidential candidates make their cases to voters in a handful of mid-Atlantic contests Tuesday, public health crises and Puerto Rico’s fiscal challenges will take center stage in Congress.

Voters will make presidential primary selections in Connecticut, Delaware, Maryland, Pennsylvania and Rhode Island. Democratic front-runner Hillary Clinton could effectively lock up the nomination if she wins big on Tuesday, and Republican front-runner Donald Trump could widen his lead.

On Capitol Hill, little appears to have changed in staving off Puerto Rico’s default since staffers for House leaders, the Natural Resources Committee and Treasury Department officials met to try and reach agreement on a resolution to the commonwealth’s debt crisis. Committee Chairman Rob Bishop (R-Utah) abruptly aborted a markup of a debt-restructuring proposal earlier this month amid concerns from both Democrats and Republicans.

While negotiations are intense, it’s unlikely that legislation could be enacted by May 1. Puerto Rico has a debt service payment of more than $400 million due on May 2. It’s not even certain that the Natural Resources panel will unite behind what Bishop anticipates would be a minor rewrite in time to hold a vote before the House recesses the week of May 1.

Meanwhile, top Senate appropriators are working on a supplemental spending package to fight the Zika virus, but it’s not clear how the bill could get signed into law before the fall. The White House has requested $1.9 billion in additional funding to combat the virus, which the Centers for Disease Control and Prevention has now definitively linked to birth defects.

Otherwise, the House has three items slated for floor consideration, most prominently a resolution of disapproval for the Obama administration’s controversial rule on investment advice. Members will also vote on the Helping Angels Lead Our Startups Act (H.R. 4498) and the Scholarships for Opportunity and Results Reauthorization Act (H.R. 4901).

Work continues on the Senate’s first appropriations bill of the year, the Energy and Water Development spending bill. So far, the amendment process appears to be going smoothly. Controversial riders, such as Sen. John Hoeven’s (R-N.D.) measure to block the Environmental Protection Agency’s Waters of the U.S. rule, have been subjected to 60-vote thresholds that all but ensure the larger bill will remain free of poison pills from either camp.

Still, the White House has come out against the energy and water appropriations bill in its current form. Even if the Senate passes the legislation, the House must wait until the middle of May to begin floor consideration of its own spending bills.

The Senate returns Monday for a 5:30 p.m. vote on an amendment to the Energy and Water Development Appropriations bill. The House isn’t back until Tuesday for votes at 6:30 p.m.

The House’s vote on a resolution to block the Obama administration’s recently finalized retirement advice rule is likely to be somewhat partisan, although several Democrats have expressed concerns that the rule’s fiduciary requirements are too onerous for financial advisers.

The House also is expected to vote on legislation reforming the process for giving U.S. manufacturers tariff relief for certain imported products, according to The Hill.

On Tuesday, the Senate Finance Committee will hold a hearing on business tax reform, one of the thorniest areas of the tax code to balance for taxwriters. It will feature as a main witness Mr. Thomas Barthold, chief of staff for the Joint Committee On Taxation.

On Wednesday, the House Financial Services Committee Monetary and Trade Subcommittee will hold a hearing on how to hold development banks accountable.

Lawmakers are also hoping to quickly schedule a conference committee on energy bills that have now passed both the House and Senate, but they haven’t nailed down specifics. The Senate passed its bill last week, which includes provisions on energy efficiency and liquified natural gas. A House version passed late last year.

On Wednesday, the House Natural Resources Committee will hold two hearings — one on the Bureau of Land Management’s methane regulations and another on hydropower. On Thursday, it will hold a hearing on a bill to improve coordination between land management agencies and local officials, and another hearing on the effects of federal land management along the U.S. border.

On Thursday, the House Science Committee will hold a hearing on the Environmental Protection Agency’s decision to block mining plans at the Pebble Mine in Alaska. EPA Regional Administrator Dennis McLerran will testify.

In the Senate, the Finance Committee will take a stab at responding to the country’s mental health crisis. A Thursday hearing is billed broadly as “mental health in America,” but members are sure to discuss the Medicaid IMD exclusion, which limits reimbursement for inpatient mental health services in Medicaid.

Lawmakers in both parties have said the Medicaid reimbursement mechanism needs to be fixed, but it’s unclear how to pay for it. Doing so could cost anywhere between $40 billion and $80 billion. Medicaid falls in the Finance Committee’s jurisdiction, so the issue wasn’t part of a mental health bill that was approved by the Health, Education, Labor and Pensions Committee last month.

The HELP Committee still hasn’t struck a deal on a medical innovation package that would give additional funding for the National Institutes of Health and, possibly, the Food and Drug Administration. Negotiators are still trying to figure out how to pay for this additional funding. Majority Leader McConnell has expressed interest in bringing a medical innovation package to the floor quickly once it’s complete.

The House will continue working on a series of opioid bills, with the Education and the Workforce Committee slated to vote on its set of measures. The Energy and Commerce Committee will vote on a dozen bills that recently passed its health subcommittee. Chairman Fred Upton (R-Mich.) has said opioid legislation will come to the House floor the first or second week of May.

Off the Hill, there will be a focus on drug prices. On Monday, the Campaign for Sustainable Rx Pricing will release its policy proposals on the subject. The campaign represents more than 80 health care organizations. On Tuesday, the Center for American Progress will also hold an event on addressing drug prices.

The House will vote Wednesday on the Email Privacy Act, a popular bill that would bring updates to the 1986 Electronic Communications Privacy Act that tech and privacy advocates have sought for years.

The bill enjoys strong bipartisan support, with more than 300 co-sponsors. It would require law enforcement officials to obtain a warrant before compelling a third-party internet provider to hand over the content of a suspect’s online communications.

A spokesman for House Majority Leader Kevin McCarthy (R-Calif.) indicated that the bill will get a vote under suspension of the rules, a designation reserved for uncontroversial measures.

But obstacles remain for the measure once it reaches the Senate, where requests for carveouts for agencies such as the Federal Trade Commission or the Securities and Exchange Commission could stall its movement.

The House will then move on another piece of popular legislation, the Defend Trade Secrets Act. The bill passed the Senate with a resounding 87-0 vote on April 4, and the House Judiciary Committee approved the same measure on a voice vote on Wednesday.

There is a sense of urgency to move the bill in the House, which boasts 159 co-sponsors (102 Republicans and 57 Democrats). Once it passes, it would head straight to President Obama’s desk, as the Judiciary Committee added no amendments during its markup. The same day the Judiciary Committee approved it, McCarthy indicated that the House would “expeditiously consider” it in the coming week.

In the Senate, the Commerce Committee will mark up and vote on a few key tech bills.

The panel will delve into two bills regarding the Federal Communications Commission. The uncontroversial FCC Reauthorization Act from Chairman John Thune (R-S.D.) would officially reauthorize the agency for fiscal years 2017 and 2018. Among its provisions are one that would direct the Government Accountability Office to conduct a study on the FCC’s regulatory fee structure and another to adjust how the agency deposits the revenue from its spectrum auctions to reflect changes in the market.

The FCC Process Reform Act is also on the agenda. The measure aims to enhance public participation in the agency’s rulemaking processes to ensure “efficient decision making.” Many of the provisions reflect how things are done currently, but as with any modern discussion about the FCC’s processes and authority, there could be some sharp critiques.

The committee will also vote on the DIGIT Act to direct the FCC to review the spectrum needs that would be required to support the Internet of Things. The measure also would assemble a group of stakeholders from the federal government and the private sector to draft recommendations on how to prepare for the increased internet connectivity that comes with IoT.

A spokesman for the sponsor of the bill, Sen. Deb Fischer (R-Neb.), said it is expected to advance from committee with “large bipartisan support.”

Puerto Rico’s next major debt payment is due on May 2.