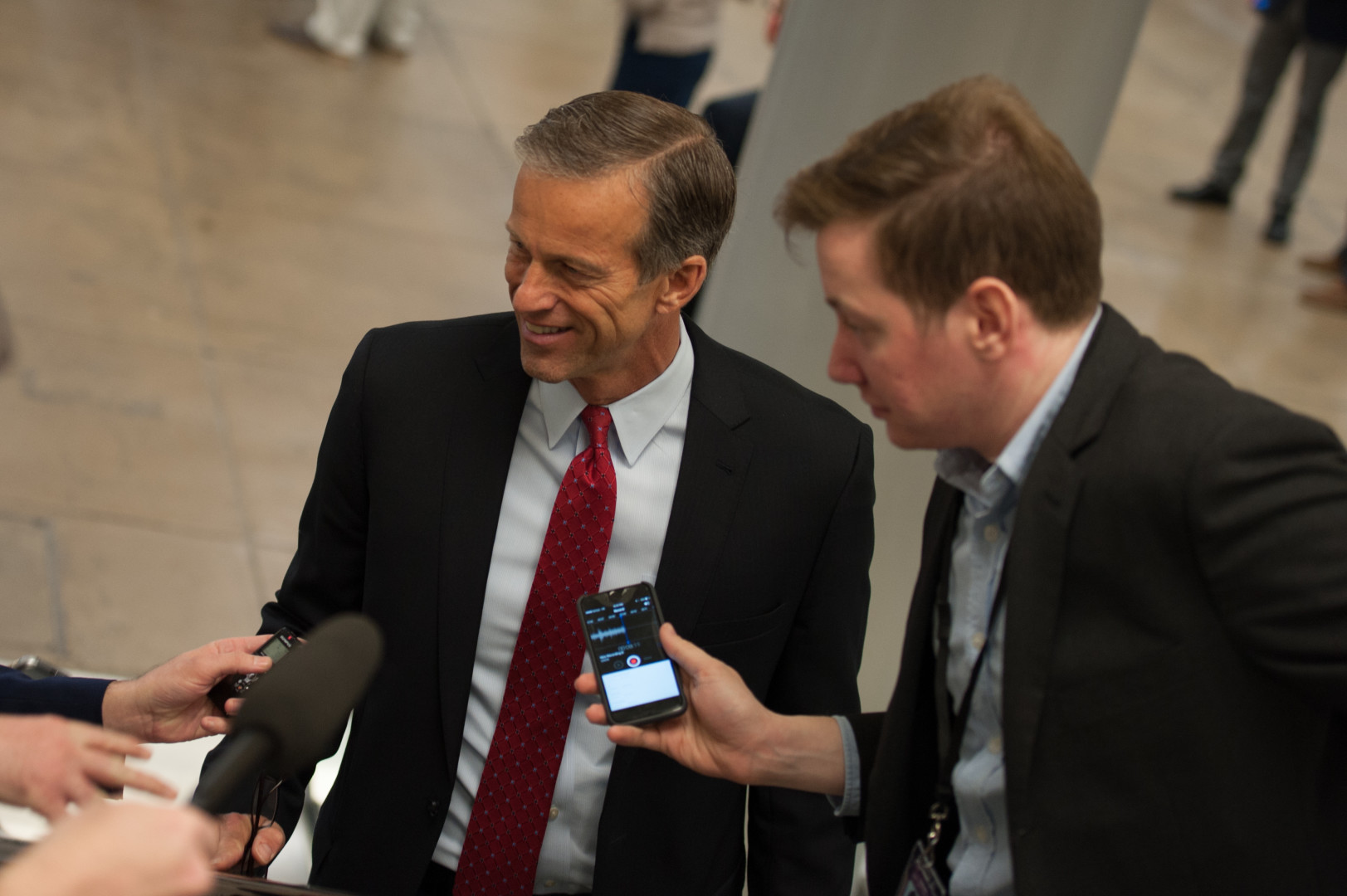 The Federal Communications Commission played two different roles in the Senate Commerce Committee on Wednesday. A vote on one bill to reauthorize the agency unified members. A vote on another to change its rulemaking process split the committee almost perfectly in half.

The committee advanced the FCC Reauthorization Act, along with 18 amendments and a manager’s amendment, on a voice vote. Senate Commerce Committee Chairman John Thune told reporters following the meeting that he hopes to pass the bill through the Senate on a unanimous vote by the end of May.

“We’ll have to report it out and do the paperwork and all the filing that’s required, but I assume that when that’s done, we’ll try and see and start running a hotline on it and get it cleared,” the South Dakota Republican said. “Probably sometime before the end of the next month, try to move this FCC across the floor,” he added.

But enough with bipartisanship. The FCC Process Reform Act passed the committee 13-11 on a vote that split senators along party lines. The bill would institute a host of transparency requirements to FCC proceedings, including a mandate that the commission could not pass any rulemaking item unless it had been made available to the public at least 21 days before the agency’s vote. The measure would also require a cost-benefit analysis on FCC rules with a significant economic impact.

Florida Sen. Bill Nelson, the committee’s top Democrat, said he opposes the bill because it “would tie the hands of the agency and make it nearly impossible for the agency to issue rules or to take enforcement actions to protect consumers.”

“While I respect those who want to earnestly improve the functioning of the FCC, I cannot support the legislation that would hamstring the FCC in its key consumer protection role,” Nelson said as he urged his fellow Democrats to oppose the bill.

Sen. Dean Heller said it is important for consumers to be able to see FCC’s actions. “We have an independent agency that has a massive influence over a sector of our economy and our entertainment,” the Nevada Republican said. “We have seen multiple examples of the FCC engaging in rulemaking practices that have raised suspicions that they are less than transparent”

Heller cited one example that has served as a poster child for the commission’s critics for over a year — net neutrality. The Nevada Republican chastised the FCC’s handling of the open internet proceedings and noted that nobody saw the text of the new net neutrality rules until two weeks after the commission voted to approve them.

He also pointed to a report published by committee member Ron Johnson (R-Wis.) that suggested the FCC Democratic commissioners changed their minds on how to proceed on net neutrality regulations after significant influence from the White House.

“We cannot have an independent agency that looks like it’s playing politics rather than actually advocating for the public interest,” Heller said. “Consumers in the marketplace deserve a better understanding of the procedures the FCC goes through to reach a decision.”

Republican’s advancement of the bill illustrates the growing discomfort with FCC Chairman Tom Wheeler’s way of leading the agency. Critics say the agency is insular and partisan and lacks the appropriate transparency.

Nonetheless, Thune worked hard to ensure that the FCC reauthorization legislation remained “clean” to ensure its passage. “It has been important to me that this reauthorization package be both bipartisan and noncontroversial, and I think we have achieved that,” he said in his opening statement.

Nelson appreciated that. “It’s a clean reauthorization. There’s a reason the agency has not been reauthorized for 25 years. It’s hard to do without attracting controversy,” he said. “So I applaud the work that you’ve done to keep the bill clean and to move it forward in a consensus way.”

That bill would reauthorize the FCC for the fiscal years 2017 and 2018 while also amending an outdated law on spectrum auction revenue deposits. It would also requiring agency documents, including budget estimates and requests and comments on legislation, be sent to Congress.

Among the flurry of amendments was a measure from Nelson and Nebraska Republican Deb Fischer, the Spoofing Prevention Act. The provision would help combat fraud schemes by prohibiting faking a caller ID for calls made outside the United States and made via online services. It would also prohibit “spoofing” one’s ID through text messages. Spoofing schemes are used to commit scams over the phone where a caller can extort money from an individual by faking a position of power.

Also included was Kari’s Law, a bill that would require multi-line phones systems, such as those in schools and hospitals, to call directly to 911 without needing to press “9” first. The House Energy and Commerce is set to vote on similar legislation Thursday.