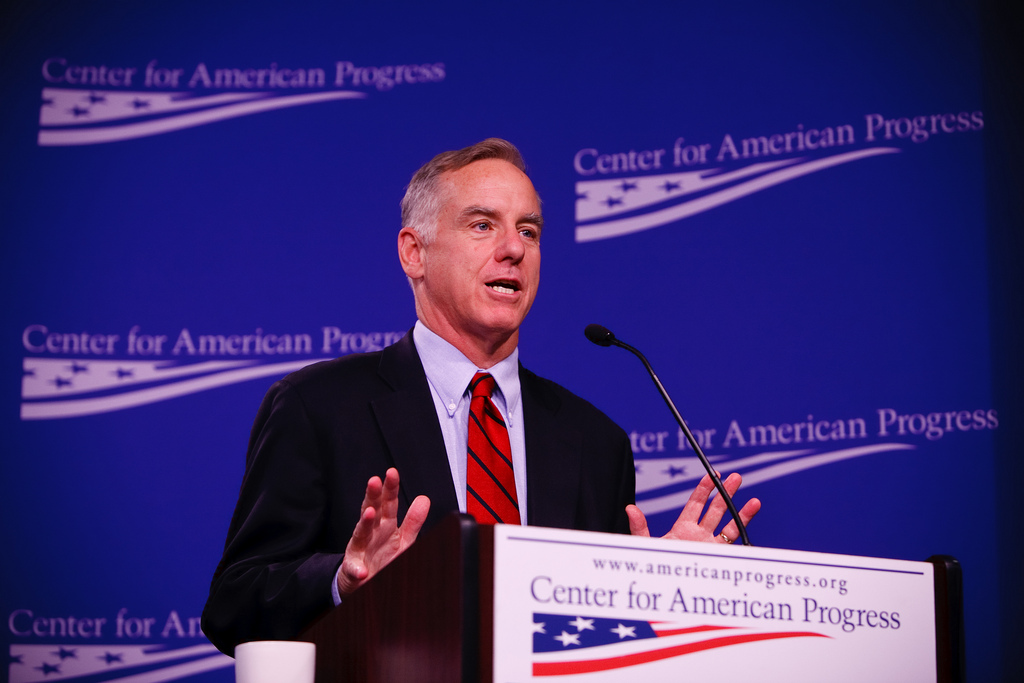 Eight years ago, Democratic voters nominated one of the more progressive presidential candidates the party had ever chosen. This year, as those same voters line up to pick their nominee to replace that progressive president, they are demonstrating a marked shift to the left, a shift that highlights the growing divide between the two ideological wings in American politics.

While analysts have focused on the growing share of conservatives and those who identify themselves as supporters of the tea party movement within the Republican electorate, there is a similar seismic shift on the Democratic side. The rapid growth in the number of voters who call themselves liberal spans across every state where exit pollsters from the consortium have surveyed voters this year, in blue states and red states alike.

In Texas, 59 percent of Democratic voters who cast ballots in the March primary called themselves liberal, up 21 points from eight years ago; in Illinois, the share of liberals jumped from 48 percent in 2008 to 61 percent today. 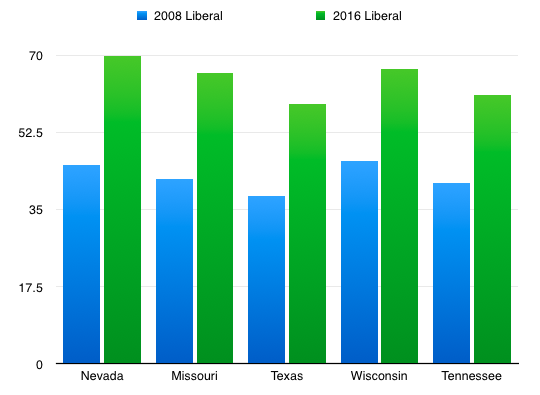 As the number of voters who call themselves liberal has increased, the percentage who identify themselves as moderate has taken a serious hit. Moderate voters have declined by 10 percentage points or more in 11 of the 25 states where exit polls have been conducted this year.

Mississippi was the only state where the share of moderates increased, and only by a single percentage point. In that state, the number of Democratic voters who called themselves conservative declined by 14 points between 2008 and 2016. 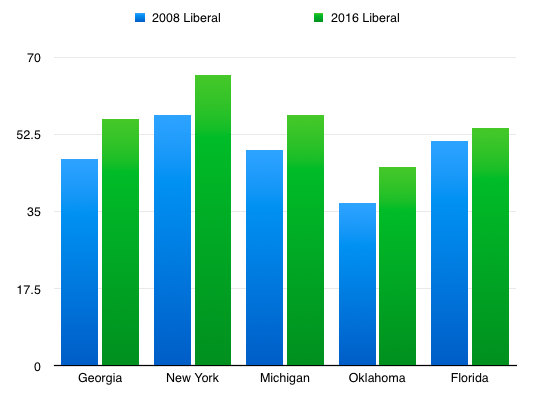 “Liberal was pilloried as big spenders, big taxers and all that stuff, and now it’s become socially applicable,” said Howard Dean, the former Vermont governor who ran for president in 2004. “The country’s moving economically to the left, because the economic system hasn’t worked for 80 percent of Americans for the last 25 years.”

Even the likely Republican nominee, billionaire businessman Donald Trump, espouses views that would be more typical in a Democratic primary, Dean said. “Donald Trump is the most liberal person they’ve nominated since Dwight Eisenhower,” he said.

Experts say Sen. Bernie Sanders’ run for the White House, which attracted thousands of new, predominately younger and more liberal supporters, likely exacerbates the trend. Those voters, said Thomas Schaller, a political scientist at the University of Maryland Baltimore County and author of the book ‘Whistling Past Dixie,’ are “either unaware or utterly unconcerned about the ideological label wars that defined Democratic politics since the mid-1980s.”

Even without Sanders, the trend toward a more liberal Democratic base has taken place over more than a decade. The exit surveys from 2008 and 2016 mirror other polls that have plumbed the ideological contours of Democratic voters.

A Pew Research Center poll released in February showed 42 percent of Democrats and Democratic-leaning independents now call themselves liberals, up from 33 percent in 2008 and just 27 percent in 2000. Moderates made up 38 percent of the Democratic base, down seven points from 2000; self-described conservatives accounted for 17 percent, down from 23 percent at the turn of the century.

Though the Democratic base increasingly relies on fast-growing minority populations, the surge of liberals is coming mainly from non-Hispanic white Democrats, especially among younger generations. Among all white voters, 50 percent told Pew pollsters they describe their views as liberal, up from 28 percent in 2000. Forty-nine percent of millennial Democratic voters, those between the ages of 18 and 35, call themselves liberal.

Dean calls millennials the first global generation, a generation that is not socially tolerant, but socially inclusive. “Liberal has come to mean things like, well, I’m for same sex marriage. Well [millennials] overwhelmingly are,” he said.

A Gallup poll from last June showed the share of self-described socially liberal and economic moderates or liberals jumping from 30 percent in 2001 to 47 percent last year.

Older generations have moved left too, but not to the same degree. The share of Silent Generation Democrats, Baby Boomers and Generation Xers who call themselves liberal is smaller, though in every case the number has risen by a substantial margin in recent years.

The share of Hispanic and African American voters who call themselves liberal now, 35 percent and 27 percent, respectively, remains largely unchanged.

There was a time when self-identifying as a liberal could be political suicide, outside of all but the most left-leaning cities in the country. Bill Clinton, famously a booster of the centrist Democratic Leadership Council, declared the era of big government over. John Kerry, named the most liberal member of the Senate by the nonpartisan National Journal before his 2004 presidential bid, called the label a “laughable characterization.” That same year, Dean cast himself as the left-leaning alternative to more centrist rivals not by declaring himself a liberal, but by claiming to “represent the Democratic wing of the Democratic Party.”

Today, the word “liberal” appears to have lost its toxicity, at least within the Democratic Party.

But at least some Democratic strategists believe a more liberal base will hurt the party’s efforts to compete in more conservative districts, where the nationalization of politics makes it more difficult for a non-orthodox Democrat to carve out a niche for him or herself.

Asked whether Democrats will have more trouble winning conservative seats if the party appears more liberal, Kristen Hawn, a longtime adviser to centrist Blue Dog Democrats, said yes. Hawn pointed to increasingly sophisticated redistricting plans, which create more safe seats that are typically won in a primary — creating an incentive for candidates to appeal to the far left or the far right.

“Down ballot, it’s terrible,” Hawn said. “And it’s even worse that we’re not recruiting moderates in the numbers that we recruited even ten years ago.”

More broadly, the shift, combined with the parallel move right among Republicans, contributes to an unprecedented ideological homogeny within both parties’ bases, and a concurrent diminishment of those in the middle.

Pew researchers have found that the share of voters who hold consistently liberal or consistently conservative views has more than doubled in the last 20 years. Political typology studies show that more than 90 percent of Republican voters hold views to the right of the median Democratic viewpoints; more than 90 percent of Democratic voters hold views to the left of the median Republican.

And the percentage of Democratic and Republican voters who see the other party as a threat to the nation’s well-being has skyrocketed in recent years, further eroding the ability of candidates on either side to persuade partisan voters.