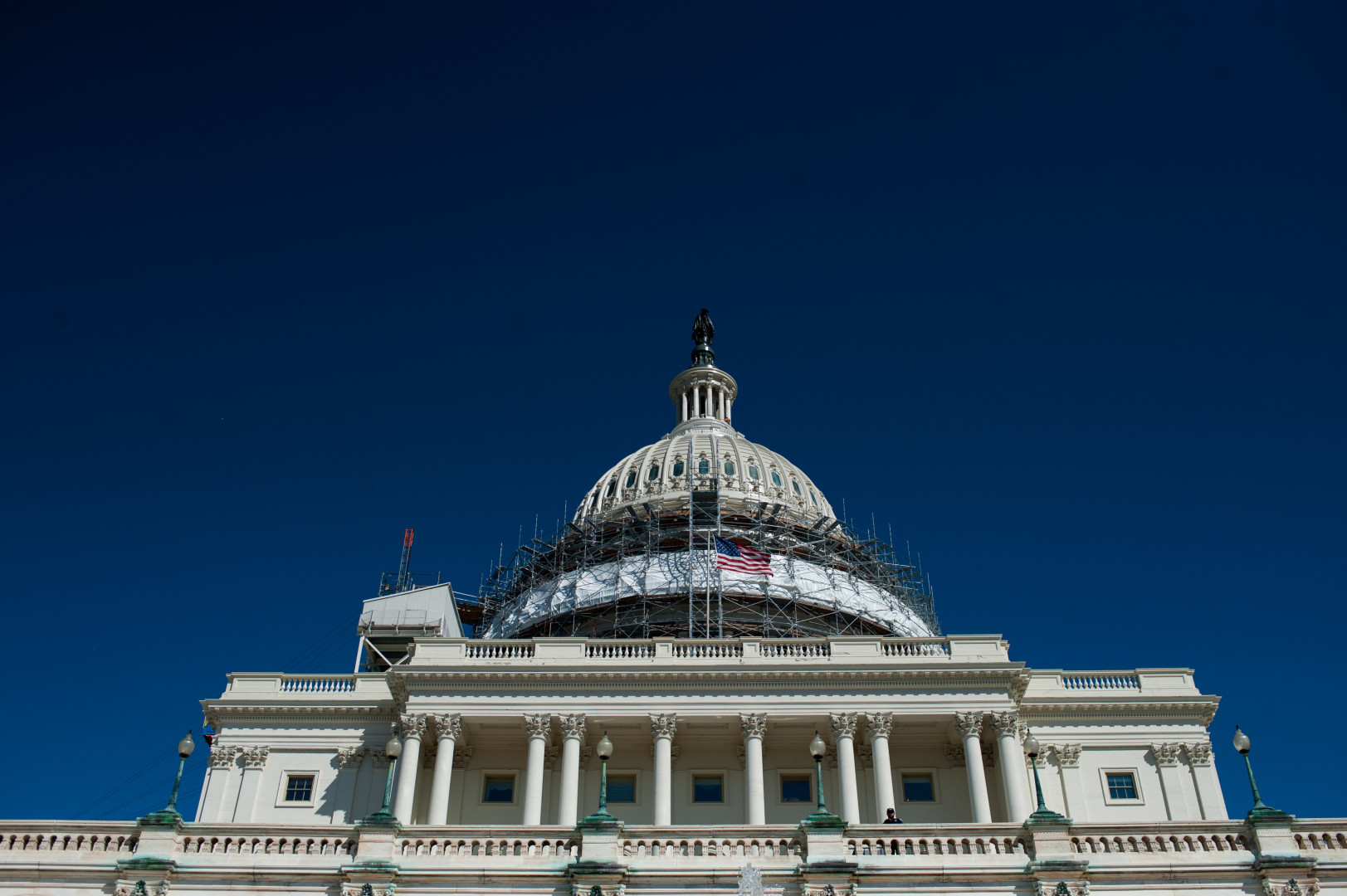 Trumpmania will hit Capitol Hill with a thud this week, as Republican lawmakers returning from a weeklong recess grapple with whether they should publicly back the controversial bombast.

Expect the start of the week to be dominated by Trump questions: Will a Donald Trump nomination change the Senate GOP’s calculus on giving Supreme Court nominee Merrick Garland a vote?

Was House Speaker Paul Ryan (R-Wis.) out of line for breaking with his party’s presumptive nominee? Will they patch things up when they meet at Republican National Committee headquarters on Thursday?

What is the the difference between “support” and “endorse”?

Is the collective grief from Beltway Republicans the reason that Washington hasn’t seen the sun in over a week?

With these looming questions, Congress still isn’t quite done with its legislative work ahead of the summer political conventions.

Lawmakers and the White House appear to have made progress on a so-far unsuccessful effort to resolve Puerto Rico’s debt crisis. The current plan is for Rep. Sean Duffy (R-Wis.) to introduce a new version of that bill on Wednesday, a committee aide told Morning Consult on Thursday. A committee vote on that bill will be postponed until the week of May 16 in order to give committee members time to review the legislation.

In the meantime, the House will consider a handful of opioid bills on the floor. Members are expected to vote on each bill separately. Once that voting marathon is done, a conference committee with the Senate will be necessary. The Senate passed its own opioid bill, the Comprehensive Addiction and Recovery Act, in March.

Meanwhile the Senate returns Monday evening to try for the third time to end debate on the year’s first spending bill, the Energy and Water Development Appropriations Act.

That legislation had proceeded smoothly until Sen. Tom Cotton (R-Ark.) offered an amendment that would restrict the administration’s ability to buy heavy water from Iran. Democrats have blocked moving towards a final vote on the bill because the White House has promised to veto the legislation over the Iran measure. The amendment itself is also a tough vote for Senate Democrats. It is essentially a referendum on the administration’s controversial nuclear agreement with Iran. Cotton has said he’s open to withdrawing the amendment if Democrats guarantee that it gets some kind of floor consideration elsewhere.

A Democratic leadership aide said Friday that as of yet, there is no agreement on moving forward on the appropriations bill. The aide also noted that there are still several days remaining to find a compromise.

Senate Majority Leader Mitch McConnell (R-Ky.) said before the recess that after completing work on that  spending bill, the Senate would likely turn to the transportation and housing funding bill, perhaps followed shortly by the military construction and veterans affairs appropriations bill.

Meanwhile, congressional responses to the Zika virus and the water crisis in Flint, Mich. remain in limbo. Senate appropriators are attempting to piece together a Zika package somewhere in the $1.1 billion range. But even if both parties can agree on Zika legislation, it’s path out of either chamber remains murky.

The fate of a Flint aid deal is similarly unclear. A Senate proposal steered by Michigan Democrats Debbie Stabenow and Gary Peters has been attached to the Water Resources Development Act of 2016. When that bill might see the Senate floor is anyone’s guess.

Exchange premiums will undoubtedly be a popular topic on Capitol Hill when members return from their district work periods, with insurers’ rate filings due on Wednesday. These are only proposals and won’t be finalized until the fall, but several early filings show double-digit requests for premium increases. Democrats will likely be playing defense, as more large increase requests are expected.

In the House, the Ways and Means Committee will hold a hearing Wednesday on the implementation of the law passed last year overhauling Medicare payments to doctors and ending the perennial “doc fix.” Other committees have held hearings on the law’s progress, but this will be the first since the Centers for Medicare and Medicaid Services released a rule laying out details of how the new payment structure will be implemented. Andy Slavitt, the acting administrator of CMS, will testify.

Also on Wednesday, the Energy and Commerce Committee will hold a hearing on alternatives to Obamacare. It will focus on how to deal with pre-existing conditions, lowering patient costs and “encouraging plan innovation without government mandates,” according to the committee.

This is the first hearing that may include more details about House Speaker Paul Ryan’s promised alternative to Obamacare. While members have met informally in working groups to discuss ideas, no concrete proposals have been made public.

The Senate will continue looking for deals on funding for the National Institutes of Health and the Zika virus, both of which went unresolved before the weeklong recess.

The Senate is scheduled to hold another procedural vote on its energy and water appropriations bill on Monday, but that is likely to be an exercise in futility, considering there is still no deal over Sen. Tom Cotton’s (R-Ark.) controversial amendment on the Iran nuclear deal.

Democrats blocked the motion on the appropriations bill last month, saying Cotton’s amendment would cause the whole bill to be vetoed.

Environmental Protection Agency officials have said over the past several weeks that the agency’s final rule regulating methane emissions from new natural gas sources will come “soon.” Oil and gas interests and environmentalists will keep watching for it.

The House Science Committee will also focus on DOE, holding an oversight hearing on Wednesday on the department’s Office of Fossil Energy. Assistant Secretary Chris Smith will testify.

On Thursday, the House Natural Resources Committee will hold two hearings. One will focus on the Bureau of Land Management’s “Planning 2.0” initiative, which aims to update how the agency solicits public input on land management. The committee will also hold a hearing on four bills that adjust the boundaries of national monuments and other federal lands.

Lawmakers are expecting to roll out a new version of a bill to help Puerto Rico restructure its debt on Wednesday. The bill has stalled because Republicans disagree over whether its debt restructuring mechanism constitutes a bailout, even though no taxpayer dollars would be at stake.

It has also stalled because various creditor groups are angling for language that will preserve some of their investments in the island’s municipal assets. It is understood that debt restructuring to avoid all-out default will require most investors to take at least some loss.

According to a committee aide, the newest version of the bill will contain new language to further clarify the existing legal and constitutional prioritization of Puerto Rico’s creditors, as well as the fiscal oversight board’s role in preserving that lineup.

On Tuesday, the Senate Banking Committee will hold a hearing about the financial risks in China.

On Thursday, the House Financial Services Committee will hold a hearing comparing the different models of affordable housing in the United States and the United Kingdom.

The Senate Judiciary Committee will be active in tech and privacy policy. The action starts Tuesday, when the full panel holds a hearing to discuss the reauthorization of the Foreign Intelligence Surveillance Amendments Act. The law doesn’t expire until the end of 2017, but it is highly controversial because of Edward Snowden’s revelations about the National Security Agency’s bulk surveillance program.

According to civil liberties and privacy advocates, a controversial section of the law leaves open the possibility of mass domestic surveillance, such as that unveiled by Snowden. Because of the substantial pushback against that particular provision, heads of various American intelligence agencies are already campaigning in Congress for the law’s renewal.

The panel’s witness list includes the chairman and another board member of the Privacy and Civil Liberties Oversight Board, a federal agency dedicated to working with the executive branch to ensure privacy and civil liberties needs are addressed in fighting terrorism.

On Wednesday, the committee’s Subcommittee on Privacy, Technology, and the Law will meet to discuss the Federal Communications Commission’s proposed new privacy rules for internet service providers.

The commission passed that proposal in late March with significant objection from industry members who believe the new regulatory framework would be confusing for companies that already have to answer to the Federal Trade Commission regarding privacy practices.

Pai, a Republican, was one of the privacy proposal’s big detractors, arguing that online consumers’ expectation of privacy “should be reflected in uniform regulation” of all providers.

Lawmakers are also mulling the Supreme Court’s recent changes in federal criminal procedure to allow judges to permit hacking operations on computers in any jurisdiction. Critics worry that this would allow the feds to hack anywhere in the U.S., and possibly the world. Currently, judges can only sign off on warrants for hacking procedures in their own legal jurisdiction.

The changes have been sent to Congress, and members have until Dec. 1 to pass changes or reject the rules outright. If they do nothing, the changes will go into effect. Staunch privacy advocate Democratic Sen. Ron Wyden of Oregon has pledged to introduce a bill to reverse the court’s update, and that bill could come up over the next few weeks to allow time to process the bill before the end of the year.

The U.S. Court of Appeals for the D.C. Circuit still hasn’t released its opinion in the massive net neutrality case, and is expected to do so any day now. The court releases opinions on Tuesday and Friday mornings at 10 a.m. (usually a little later than that). Look out for the opinion on US Telecom Association vs. FCC here on Tuesday or Friday to see if that changes.