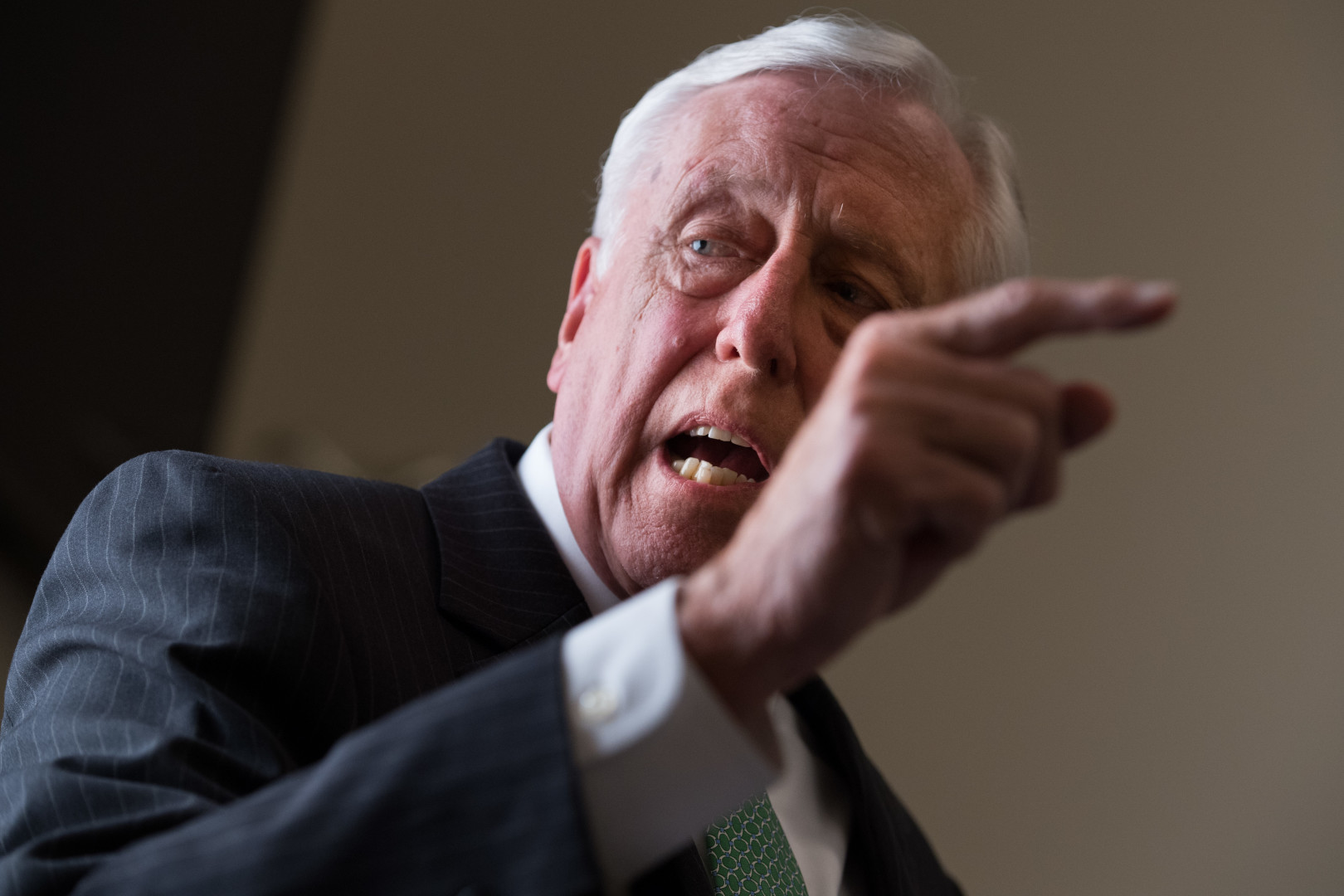 Hoyer railed against the media during his pen-and-pad briefing Tuesday. (Rob Kunzig/Morning Consult)
By Jon Reid

The elation House Democrats felt after the House adopted an amendment Thursday to take down the Confederate flag on some federal grounds didn’t last long.

Minutes after Democrats applauded the adoption of a Jared Huffman (D-Calif.) amendment prohibiting the display of the Confederate battle flag at some national cemeteries, chaos erupted during another vote when a number of Republicans flipped at the last second, blocking a pro-LGBT provision on the verge of adoption by a 212-213 margin.

House Democrats, furious at the outcome of the vote, began chanting “shame!” in unison and Minority Whip Steny Hoyer took to the floor to accuse House Republicans of violating parliamentary procedure.

The Maryland Democrat took issue with the amount of time lawmakers had to change their vote after the two-minute vote time was up.

“We had a vote where equality and justice and inclusion won, and they spent five or 10 minutes twisting arms and turning them around so that they could defeat the Maloney motion for non-discrimination,” Hoyer told reporters after he spoke on the floor.

The provision, which would prevent federal funds from being used in contracts with companies that do not comply with President Obama’s executive action barring discrimination on the basis of sexual orientation, was introduced as an amendment to a Military Construction-Veterans Affairs spending bill by Democratic Rep. Sean Patrick Maloney, New York’s first openly gay congressman.

The amendment was a follow-up to one House Democrats offered on Wednesday night, which forced a vote on a measure that would nix a provision in a defense policy spending bill preventing companies from being discriminated against on the basis of religion concerning federal contracts. It also contained another provision targeting the display of the Confederate flag. The measure, called a motion to recommit, was rejected in a 181-243 vote along party lines.

House Democrats also argued that lawmakers must vote at “the well” in front of the chamber to change their vote once time has elapsed. Rep. Luis Gutiérrez said there have been “many times” when he has had to vote at the well once the time is up.

The electronic voting stations for lawmakers remain open for two-minute votes, which was the duration of the vote on the Maloney amendment, according to House parliamentary rules. The stations only close during the final five minutes of a 15-minute vote, at which time members wanting to change their votes must do so at the well.

“If you have your voting card, you’ve been able to change it at the box in a 5-minute vote or a 2-minute vote,” the Rep. Louie Gohmert (R-Texas) said on the House floor after the vote.