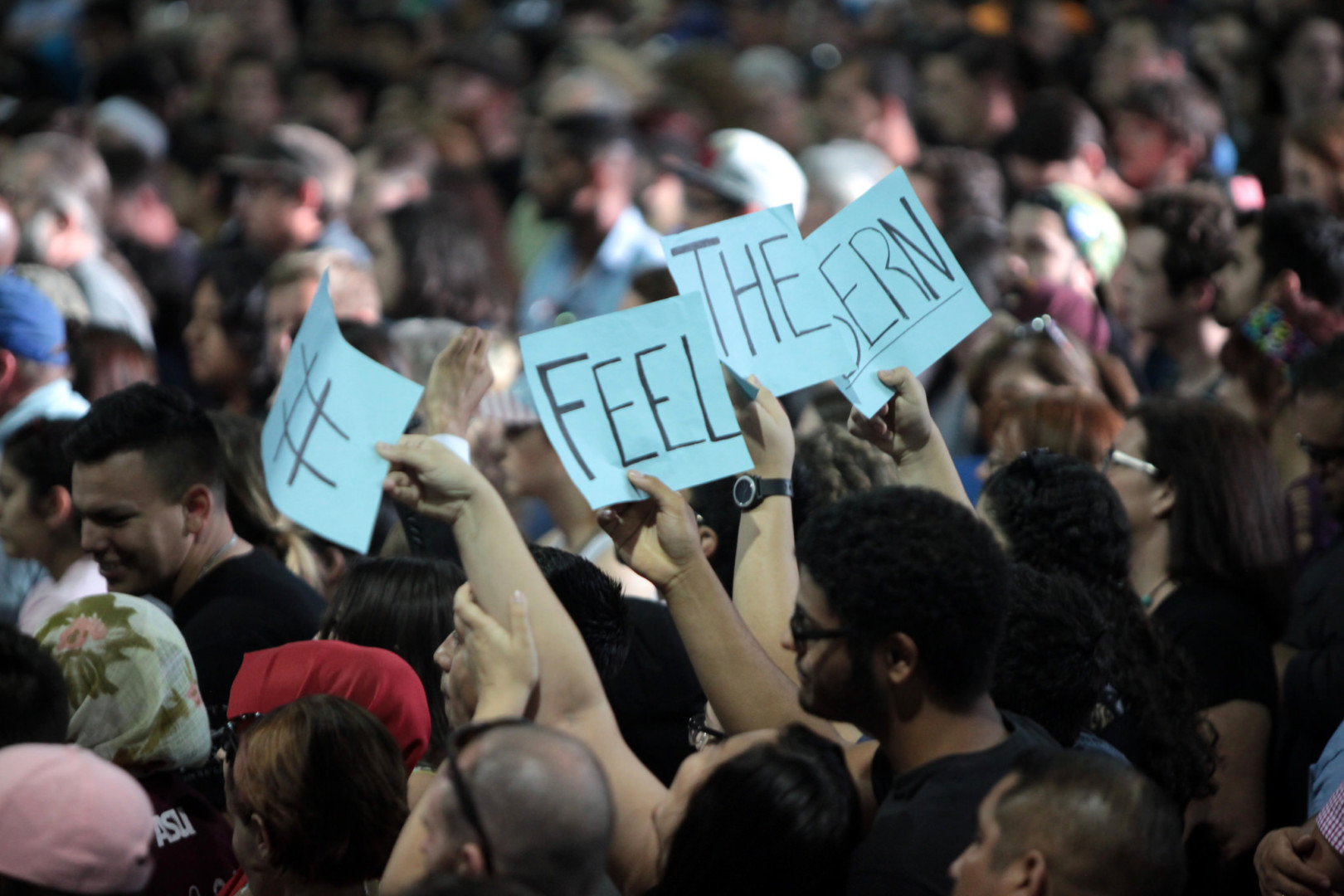 Sanders supporters cheer at a campaign rally in Phoenix. (Image via Flickr)
By Reid Wilson

When Hillary Clinton formally claims the Democratic Party’s presidential nomination this summer in Philadelphia, she will inherit a party in the throes of a revolution — one in which her side seems likely to lose in the long term.

The upheaval has been decades in the making, as the party has evolved from choosing relative centrist nominees such as Bill Clinton, Al Gore and John Kerry over more liberal contenders, to Barack Obama, who positioned himself to the left of Hillary Clinton in 2008. Now, even while Clinton appears set to win the Democratic nomination this year, she has faced an unexpectedly difficult challenge from Sen. Bernie Sanders (I-Vt.), the farthest-left Democratic candidate to seriously vie for the nomination in decades.

Around the country, signs are mounting that the more liberal wing of the Democratic Party is gaining strength, and asserting its power. Through April, Sanders, before this race a back-bench senator with little real political power, had raised more money for his presidential contest than the vaunted Clinton machine. Clinton herself has moved to the left, in an effort to head off Sanders.

Sen. Elizabeth Warren (D-Mass.), aside from Sanders the most prominent leader of the liberal faction, is a member of Senate Democratic leadership. And Sanders has lent his support, and fundraising help, to liberal candidates running in Democratic primaries in Washington state, Nevada and New York.

(Underscoring the divided factions within the Democratic Party, Bill Clinton on Tuesday endorsed a different candidate in the Nevada race, where Democrats are trying to unseat freshman Republican Rep. Cresent Hardy.)

The shift is driven in large part by core Democratic constituencies that are becoming more liberal. In every state in which exit polls have been conducted during this year’s primary season, the share of voters who identify themselves as liberal has grown since 2008, in many cases by double digits.

American political parties reinvent themselves constantly, and the elements of this evolution have parallels to the internecine war that has ravaged the Republican Party for a decade. Conservatives revolted against George W. Bush and the compassionate conservatism they saw as an abdication of core GOP beliefs; liberals are now venting their frustration over Obama’s perceived lack of progress on everything from the environment to Wall Street regulations and campaign finance reform.

Those reinventions often begin when a party prepares to pick a new presidential nominee. Conservatives and more moderate Republicans fought ugly ideological battles in 1964, 1976, 1980 and 1988; liberals feuded with more establishment Democrats in 1968, when riots marred the party’s convention in Chicago, in 2000, when Sen. Bill Bradley (D-N.J.) ran to Gore’s left, and in 2004, when Kerry bested former Vermont Gov. Howard Dean.

Now, with an open Democratic contest, those conflicts are once again coming to the fore — along with an equally nasty feud among Republicans, who have not had a titular head of their own party since Bush retired to Texas.

The Republican reinvention offers a warning of what may be ahead for Democrats: In the wake of the 2006 elections, in which Republicans lost control of Congress, conservatives began targeting more centrist candidates for defeat, in hopes of returning the party to what they saw as its ideologically pure roots, spurring a small cottage industry of outside groups that delight in needling the establishment.

In some cases, when those centrist candidates lost — in states such as Delaware, Indiana, Nevada and Missouri — Democrats handily defeated the conservative favorites. In others, the more conservative candidates who won have banded together to form the House Freedom Caucus, which regularly opposes Republican leaders and complicates the governing process.

For Democrats, Sanders’ rising appeal to key constituencies — especially younger voters — marks a milestone, but not the end, of the path. Clinton’s nomination will do little to relieve the pressure building under the surface, and out in the open. While Sanders fans are overwhelmingly likely to back Clinton in a contest against presumptive Republican nominee Donald Trump, they will agitate for more liberal policies — and perhaps more liberal nominees, both in down-ballot races and the next time the party gets to choose a standard-bearer.