Trump’s Low Favorability Can Be Attributed to ‘Racism’ and ‘Inexperience’

Donald Trump is perhaps the least popular Republican presidential candidate of all time. But according to a new Morning Consult report, voters have a hard time choosing just one reason for their distaste.

Voters who don’t like Donald Trump have a lot of reasons driving their distaste for the presumptive Republican nominee. But the most commonly cited ones are that Trump is racist (25 percent) and does not have the right experience to be president (20 percent).

The presumptive GOP nominee has repeatedly stoked racial and ethnic tensions, from referring to undocumented Mexican immigrants as “rapists” during the speech to launch his campaign, to calling for a ban on allowing Muslims into the country following the attacks in San Bernardino and Orlando. Trump faced bipartisan criticism for insinuating that a federal judge born in Indiana to parents who emigrated from Mexico was unable to preside fairly over the Trump University fraud case because of his “Mexican heritage.”

Related: Clinton and Trump are Historically Unpopular. Here’s Why. 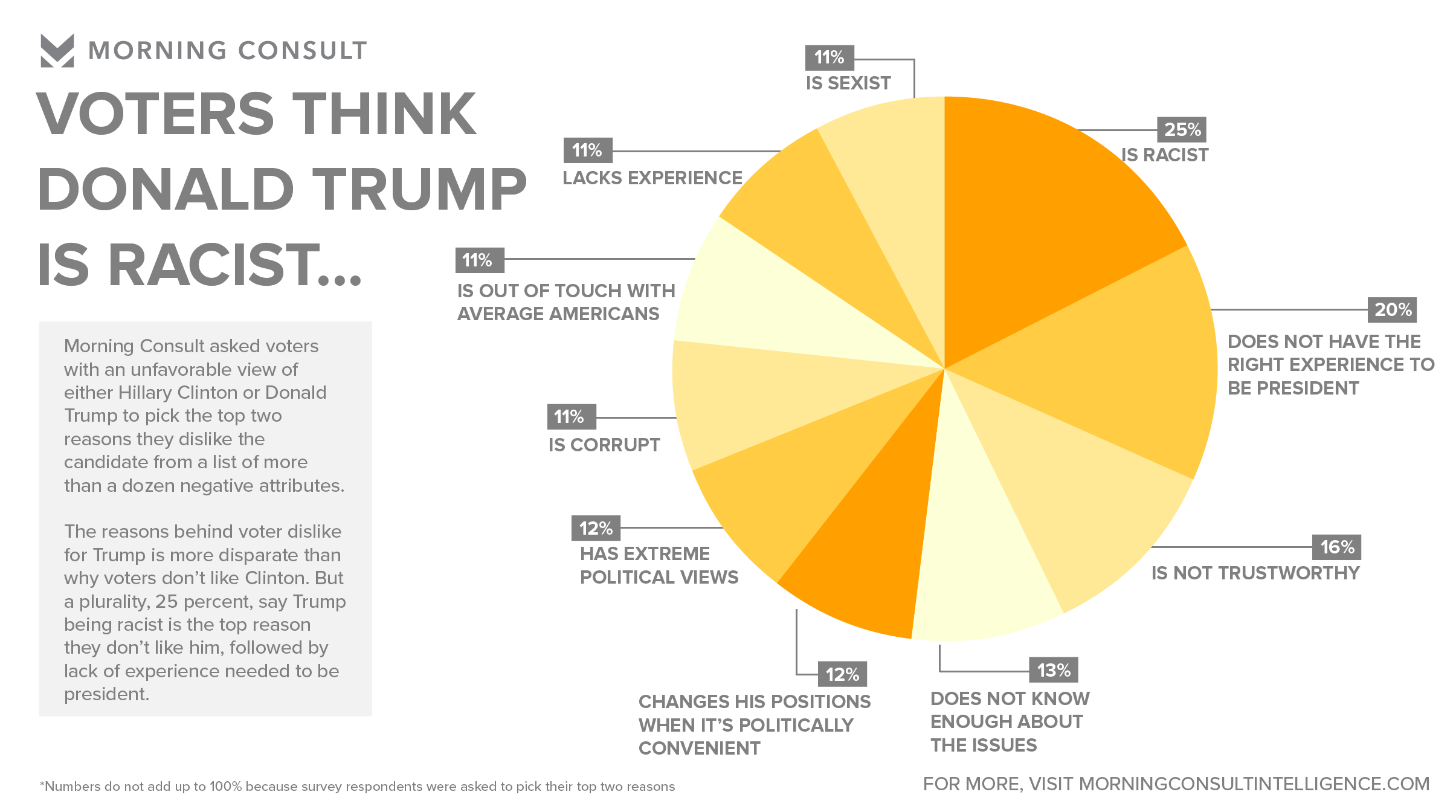 Breaking down the criticism along partisan lines, Democrats (29 percent) and independents (22 percent) who had an unfavorable view of Trump were more likely to cite the argument that he is racist than Republicans (15 percent). Democrats (16 percent) and Republicans (14 percent) were closer in their views that Trump possesses extreme political views, while that was less of a concern for independents (9 percent).

Additionally, one-fifth of voters with an unfavorable view said Trump doesn’t have the right experience to be president. While Trump spent much of the primary campaign attacking his opponents as career politicians who haven’t been acting in the best interest of Americans, voters are skeptical he is prepared for the job. Republican voters (28 percent) were the most likely to say they viewed Trump unfavorably because of a lack of experience, while 19 percent of Democrats and independents concurred with that assessment.

And while those are the main reasons voters don’t like Trump, there are many others. Sixteen percent of voters think he’s not trustworthy, 13 percent say he doesn’t know enough about the issues and 12 percent say he changes his positions when it’s politically convenient and has extreme political views. Eleven percent of voters also said Trump was corrupt, sexist, and out of touch with average Americans.

Morning Consult surveyed 2,001 registered voters from May 27-30, 2016, asking voters with an unfavorable view of either Hillary Clinton or Donald Trump to pick the top two reasons they dislike the candidate from a list of more than a dozen negative attributes. Toplines and crosstabs are available here and here, respectively.

You can read about the full study here.