The Coming Week: Senate to Vote on Zika, Puerto Rico in Brexit’s Wake 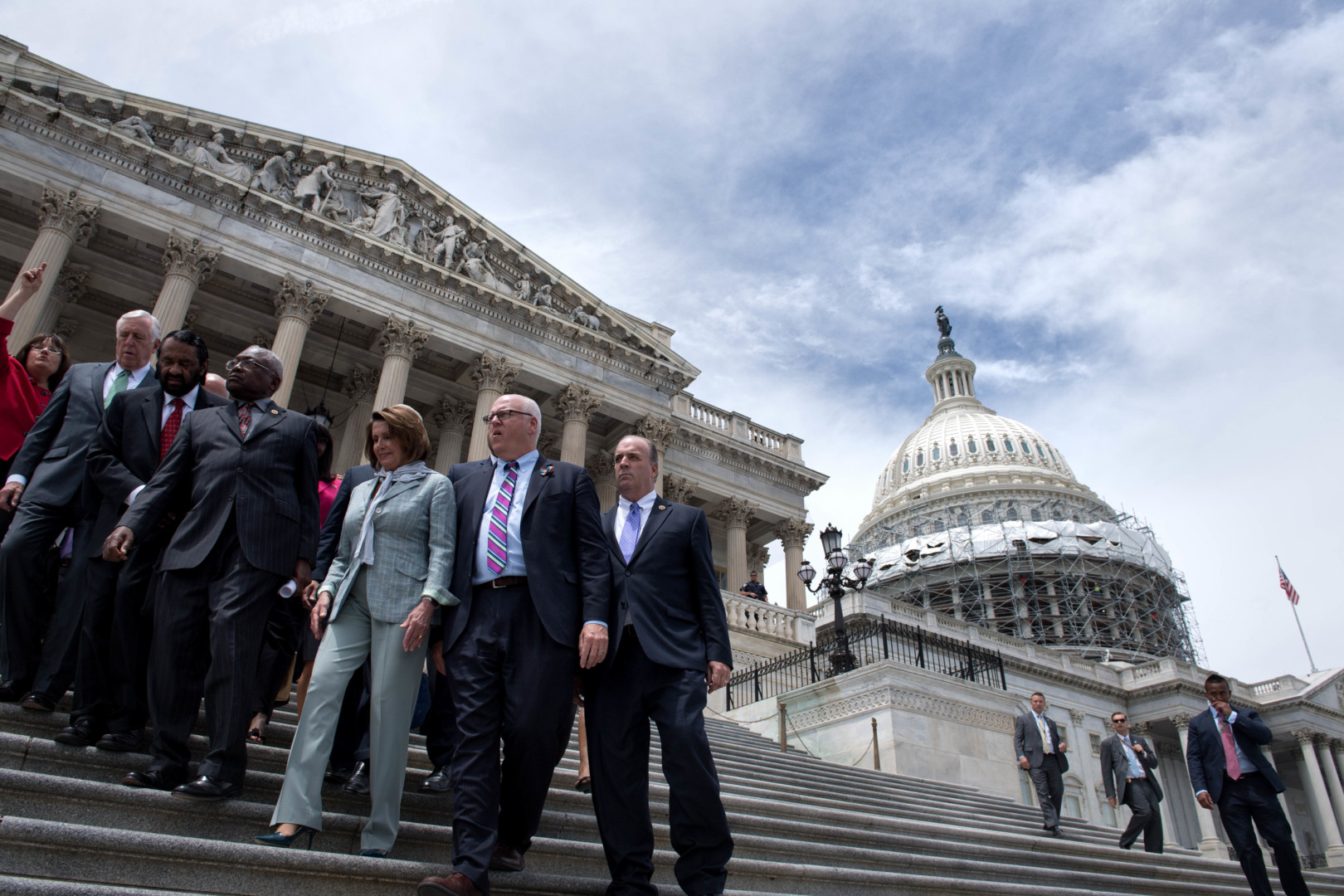 The Senate is slated to address Puerto Rico’s debt crisis and funding for the Zika virus this coming week. But partisan gridlock could make it difficult to knock out both measures before lawmakers go home for a July Fourth long weekend. Zika, in particular, is not expected to advance.

Senators are under immense pressure to keep Puerto Rico from defaulting on a $2 billion payment that’s due on July 1st. Minority Leader Harry Reid (D-Nev.) is demanding GOP leaders allow votes on amendments to the bill, which the House passed earlier this month in a bipartisan 297-127 vote.

With the House adjourned until July 5, the Senate will have to pass the bill without amendments in order to send it to President Obama for his signature before the payment is due.

Reid has said that votes on amendments to the House-passed bill, H.R. 5278, will allow the public can see what’s not in the measure.

In remarks to reporters on Tuesday, McConnell signaled that he’s hoping to get the measure out out of the Senate’s hands and on the president’s desk as quickly as possible. But if Democrats insist on several amendments, that process could be slowed down. Since then, McConnell declined to say if votes on amendments will be held.

Before the Senate takes up the Puerto Rico legislation, McConnell will have the chamber consider a military construction and veterans affairs spending bill that includes $1.1 billion to fight the Zika virus.

Republicans want to pass the Zika bill before the end of the week, but that is unlikely with Democrats opposed to some of its provisions. Republicans initially sought a bipartisan compromise on Zika funding, but ended up forcing the spending bill through the House last week in a late-night vote during Democrats’ sit-in on gun violence.

One provision that Democrats oppose would limit funding for clinics like Planned Parenthood. Also, $750 million of the funds are offset. Democrats demand that Congress pass emergency funds for Zika, which are not offset.

Republicans, who lack a supermajority in the Senate, will not be able to pass the Zika bill without some support from Democrats. And if the chamber passes a new version that can garner some bipartisan support, it will then head back to the House, which is out until next month.

Senate Democrats may call on Republican leaders to hold more votes on gun measures after the terrorist attack in Orlando, Fla. But they may not feel pressured into doing so following the four votes they held last week.

Voters in Colorado, New York, Oklahoma and Utah will go to the polls on Tuesday to select their nominees for Congress. Former Colorado state Rep. Jon Keyser is the establishment favorite in the state’s GOP Senate primary, but is being challenged by Darryl Glenn, who has the backing of Sen. Ted Cruz (R-Texas) and some conservative outside groups. The winner will face off in November against incumbent Sen. Michael Bennet (D).

The Senate will vote at 5:30 p.m. on Monday on the nomination of Robert F. Rossiter, Jr., of Nebraska, to be United States District Judge for the District of Nebraska.

All eyes are on the Puerto Rico vote in the Senate, but lawmakers and regulators also will watch the fallout from the United Kingdom’s stunning vote to leave the European Union.

The successful Brexit vote already has shocked global financial markets, including in the United States, where major stock indexes were down by over 2 percent during midday trading on Friday. Both the Federal Reserve and the Securities and Exchange Commission released statements on Friday that appeared aimed at calming markets and reassuring investors of their respective roles in managing any global shocks.

Brexit also will undoubtedly have an impact on negotiations between the United States and the EU on a bilateral trade agreement. That deal, known as the Transatlantic Trade and Investment Partnership, has been under negotiation since 2013. U.S. Trade Representative Michael Froman said in a statement on Friday that the U.S. is “evaluating the impact of the United Kingdom’s decision on T-TIP and look forward to continuing our engagement with the European Union and our relations with the United Kingdom.”

With the House out, it’s unlikely Democratic senators will take any further steps toward a conference committee on the chambers’ energy bills. Sen. Maria Cantwell (D-Wash.) laid out some requirements for the conference committee on Thursday, calling for a “very progressive” title on energy efficiency, and questioning if the bill could “bear the weight” of Republican provisions on wildfire and California’s drought.

On Tuesday, the Energy Information Administration will release updated energy projections, including scenarios on the Clean Power Plan, fuel economy standards for trucks and other variables that could affect the country’s energy sources. The EIA has received criticism for underestimating the growth of renewables in previous reports, and its first energy outlook in 2016 assumed the CPP and Paris agreement would not go into effect. These updates provide a wider range of scenarios, compared to the fossil fuel-heavy reports that it has released in the past.

The Senate Commerce Committee will vote Wednesday on a series of environmental bills. One recently introduced by Sens. Dan Sullivan (R-Alaska) and Maria Cantwell (D-Wash.) would establish an American Fisheries Advisory Committee to award grants on fisheries research and development.

Another bill on the agenda, by Sen. Jeanne Shaheen (D-N.H.), would require the Commerce Department to conduct a study on outdoor recreation’s impact on the country’s economy.

Another bill would reauthorize the Marine Debris Act, which directs the National Oceanic and Atmospheric Administration to prevent and remove debris. Also on the agenda is a bill to reauthorize NOAA’s program offering grants on rescuing marine mammals.

The markup will also include a sportfishing access bill by Sens. Bill Nelson (D-Fla.) and Marco Rubio (R-Fla.).

A Senate Energy and Natural Resources subcommittee will hold a hearing on Tuesday on land-use plan amendments by the Bureau of Land Management and the Forest Service, and how the agencies have interacted with state and local groups on those plans. Officials from the agencies will testify, along with a public lands official from Utah.

On Wednesday, a Senate Environment and Public Works subcommittee will hold an oversight hearing on the Environmental Protection Agency.

The Supreme Court will announce its ruling on a major abortion case Monday. The case, Whole Woman’s Health v. Hellerstedt, is the first major abortion case to be heard by the court in nearly a decade. It will determine the legality of a Texas abortion law requiring a doctor performing an abortion to have admitting privileges at a hospital within 30 miles.

If the Court splits 4-4, the Texas law will stand, but no precedent will be set. The justices could also rule in favor of Whole Woman’s Health, which would set a precedent and determine the Texas law creates an undue burden on abortion clinics. A ruling in favor of the state is unlikely, as the four liberal justices are unlikely to join the conservatives in upholding the law.

Progress on outstanding legislation on Capitol Hill is likely to be minimal. With the House out, the conference on opioid legislation is presumably stalled until July. While there has been talk of adding mental health and medical innovation legislation to the opioid conference report, that’s far from certain. Negotiations over how to proceed on both of those bills in the Senate are still in flux.

The Finance Committee will wade into debate over the Obama administration’s Medicare drug payment proposal in a hearing Tuesday morning. Patrick Conway of the Centers for Medicare and Medicaid Services will testify. Committee Republicans wrote a letter to the agency saying they were opposed to the proposal, which aims to bring prices down on drugs, such as those used in chemotherapy, that are administered in a hospital or doctor’s office. Committee Democrats also wrote a letter to CMS about the proposal, saying they have concerns with its design and would like to see changes made.

Vice President Biden will host a national conference on cancer research on Wednesday at Howard University, bringing together scientists, oncologists and donors. The event is part of Biden’s cancer moonshot.

The U.S. government and technology community is weighing the impact of Brexit on a number of areas, most notably the deal between the United States and the EU on sharing data. European officials already are worried about U.S. surveillance of electronic data, as European privacy laws are much stronger than those in the U.S. It’s unclear how servers in the U.K. that are supposed to be covered under the privacy shield will now be treated.

Officials from both the EU and the U.S. who were involved in crafting the privacy shield will speak about Brexit’s impact at an event Monday presented by the Computer & Communications Industry Association.

In Congress, the Senate Commerce Committee will meet Wednesday to vote on several tech-related bills. The biggest measure on the agenda will be the American Innovation and Competitiveness Act, a bipartisan bill designed to maximize basic research in science and technology.

The wide-ranging measure, introduced late Thursday, is intended to boost basic science and technology research, with a special focus on cybersecurity. It would most directly affect programs at the National Science Foundation, National Institute of Standards and Technology and the White House Office of Science and Technology Policy.

The committee also will vote on three other tech bills that have languished on its agenda, including the Kelsey Smith Act, which would require a phone service provider to give law enforcement officials call location information for devices that were used to call 911 or “reasonably believed” to be in the possession of a person in danger of serious physical harm or death.

Another of the three measures on the agenda is a bill calling for a Federal Communications Commission study on the public safety benefits and cost of creating Wi-Fi hotspots that would allow public access to 911 services during natural disasters or other occasions where mobile service goes down.

The final item on the agenda is legislation designed to improve rural phone call quality.

On Tuesday, the Commerce Committee will hold a hearing on how the Internet of Things can help transportation and infrastructure.