Almost half of Republicans (46 percent) say their party has “pretty seriously gotten off on the wrong track,” according to a new Morning Consult poll conducted the week before the Republican National Convention.

The poll results signal that the unpredictability of the 2016 presidential election, with an unabashedly pompous nominee at the top of the ticket, is taking a toll on the party faithful, particularly among older Republicans. Still, 40 percent of Republicans say their party is on the right track, and 14 percent don’t know or have an opinion on the question.

Perhaps those who remember earlier Republican eras are biased for bygone days. Healthy majorities of self-identified Republicans who are at least 45 years old say the party of Ronald Reagan and Dwight Eisenhower is now on the wrong track, while only about one-third of younger Republican voters think the party is going astray.

Notably, less than one-third of Republican voters 55 to 64 years old (27 percent) said the GOP is on the right track. That figure was twice as high for GOP voters between the ages of 30 and 44 (54 percent) who believe Republicans are going in the right direction.

In Congress, much of the rhetoric about the state of the Republican Party has been pushing back on the idea that the GOP is “the party of no.” Republicans are fighting negative images from several past years of threatened (or actual) government shutdowns and internal party conflict.

To counteract that negativity, House Speaker Paul Ryan (R-Wis.) rolled out an extensive “Better Way” Republican agenda that includes broad tax and regulatory proposals intended for a Republican president. Senate Majority Leader Mitch McConnell (R-Ky.) has repeatedly cited the his chamber’s progress on legislation since Republicans took over the Senate, including recent victories on opioid addiction and the Federal Aviation Administration.

It’s not clear that these efforts are working with many self-identified Republican voters. Almost two-fifths (38 percent) said they believe the Republican Party is “stale,” while half of them disagree with the statement that the party is “fresh.”

About two-thirds of Republicans feel that leaders in their party care about people like them (64 percent) and represent their views (68 percent). Still, a noticeable minority (23 percent) definitively say that party leaders do not care about people like them. One-fifth of Republican voters say the party doesn’t represent their views.

Republicans feel that their party is strong when it comes to governing. About three-fourths of GOP voters said the Republican Party will keep the United States safe (75 percent) and tackle the big issues facing the country (74 percent). Party members are less likely to believe that the GOP elected officials will stick to core party values (62 percent).

The respondents may be reacting to different views of how they think the party should be, depending on whether they approve of a nontraditional candidate like Donald Trump or prefer more conventional Republicans like George W. Bush.

Trump is unquestionably the party leader that Republican voters believe best reflects their party’s values, although opinions are varied enough that only 29 percent of respondents say the grandiose businessman is the best GOP whisperer. 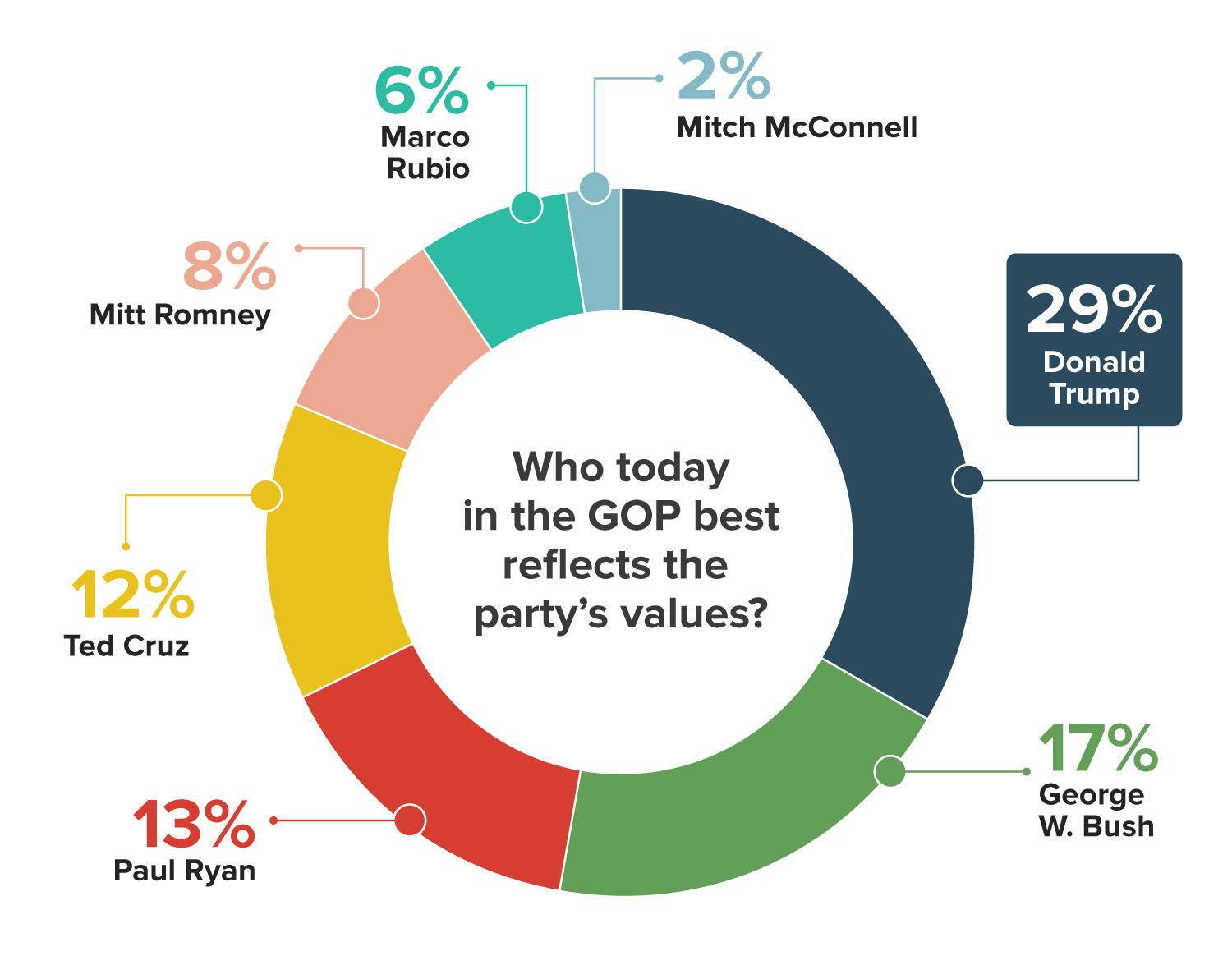 George W. Bush comes in second on the question of which active and prominent Republican best represents party values, with 17 percent of Republican respondents choosing him. Paul Ryan (13 percent) and Texas Sen. Ted Cruz (12 percent) are the only other party leaders that at least some respondents believe best reflect GOP values. Mitt Romney (8 percent) and Florida Sen. Marco Rubio (6 percent) barely move the dial. Mitch McConnell was selected by only 2 percent of GOP respondents as the leader that best reflects party values.

There is no question, however, about the historical best Republican. Ronald Reagan is by far GOP voters’ choice of favorite Republican presidents in modern times, with 59 percent selecting the former actor and California governor as their favorite. George W. Bush is a favorite for 11 percent of GOP voters. Theodore Roosevelt is a favorite for 9 percent.

The poll was conducted July 8-10 among a national sample of 2,001 respondents. The data reported in this story reflects responses from 613 self-identified Republican voters, with a margin of error of plus or minus 4 percentage points.