Kaine's the pick, but voters don't know much about him. (Rob Kunzig/Morning Consult)
By Eli Yokley

Hillary Clinton said Friday she will choose Virginia Sen. Tim Kaine as her running mate, one of the least known prospects according to a recent Morning Consult survey.

The choice of Kaine, Virginia’s former governor who once chaired the Democratic National Convention, is viewed by some as a reach toward the middle. The move, announced via text from Clinton’s campaign, will likely irk some of the party’s base who preferred a bolder pick, such as Massachusetts Sen. Elizabeth Warren.

Related: Gingrich, Warren Would Drive Most Enthusiasm as VP Picks

Only 11 percent of voters said Kaine joining Clinton as her running mate would make them more likely to support her in the November election, compared with 21 percent for Warren. Only 20 percent of Democrats said the choice of Kaine would sway their vote in her favor, and among independents, that figure drops to 7 percent.

Kaine was the least-known among other vice presidential prospects posed to voters by the survey. About a quarter (27 percent) of voters said they did not know or had no opinion of Kaine, and almost half (49 percent) said Clinton choosing him as her running mate would have no impact on their vote either way. 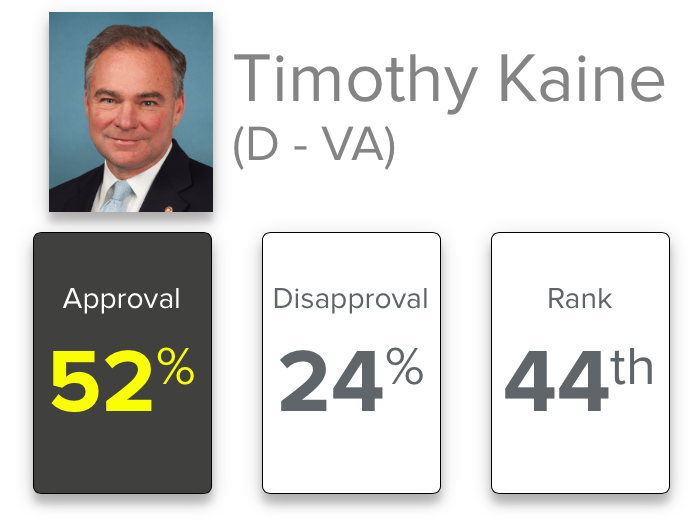 With a positive approval rating from 52 percent of Virginia voters, Kaine ranks 44th among the 100 senators in terms of how they are viewed in their home state, according to Morning Consult’s Political Index.

Clinton had reportedly also been considering Tom Vilsack, the secretary of Agriculture and former Iowa governor. When voters were asked in February, only 1 percent of them said Clinton should pick Vilsack as her running mate.

“Hillary Clinton’s choice of Tim Kaine does nothing to unify a fractured Democrat base which is repelled by her dishonesty and cronyism,” Priebus said. “After spending last week pandering to grassroots Democrats with Bernie Sanders, Hillary Clinton has chosen someone who holds positions that she’s spent the entire primary trying to get to the left of.”