Poll: Women Less Likely to Support Trump, but Many Are Undecided

PHILADELPHIA — Hillary Clinton and her surrogates hope to make a powerful case for women voters here at the Democratic National Convention this week. There is an opportunity to do so. Morning Consult’s polling shows that women, so far, have proven more reluctant to support Donald Trump than men.

In the weeks leading up to the Democratic and Republican national conventions, women were far less likely than men to say they supported Donald Trump. But there were also a lot more women who were undecided.


This six-week Morning Consult poll includes responses from 23,347 registered voters, a robust sample that can, with larger confidence than an instant poll, identify the differences between various voting blocs.

A smaller weekly Morning Consult national tracking poll, taken over the weekend after the Republican National Convention ended in Cleveland, showed that Trump gained women supporters as part of the traditional “convention bump” that shows a spike in polls for the candidate who has just been nominated. It is unclear if that level of support will remain after the Democratic convention has concluded.

Before the political conventions began, the youngest women were most likely to support Clinton and least likely to support Trump, echoing Morning Consult’s earlier analysis showing that younger voters generally are more inclined toward Clinton. Almost twice as many women between the ages of 18 and 34 said they support Clinton (49 percent) as those who said they support Trump (26 percent). 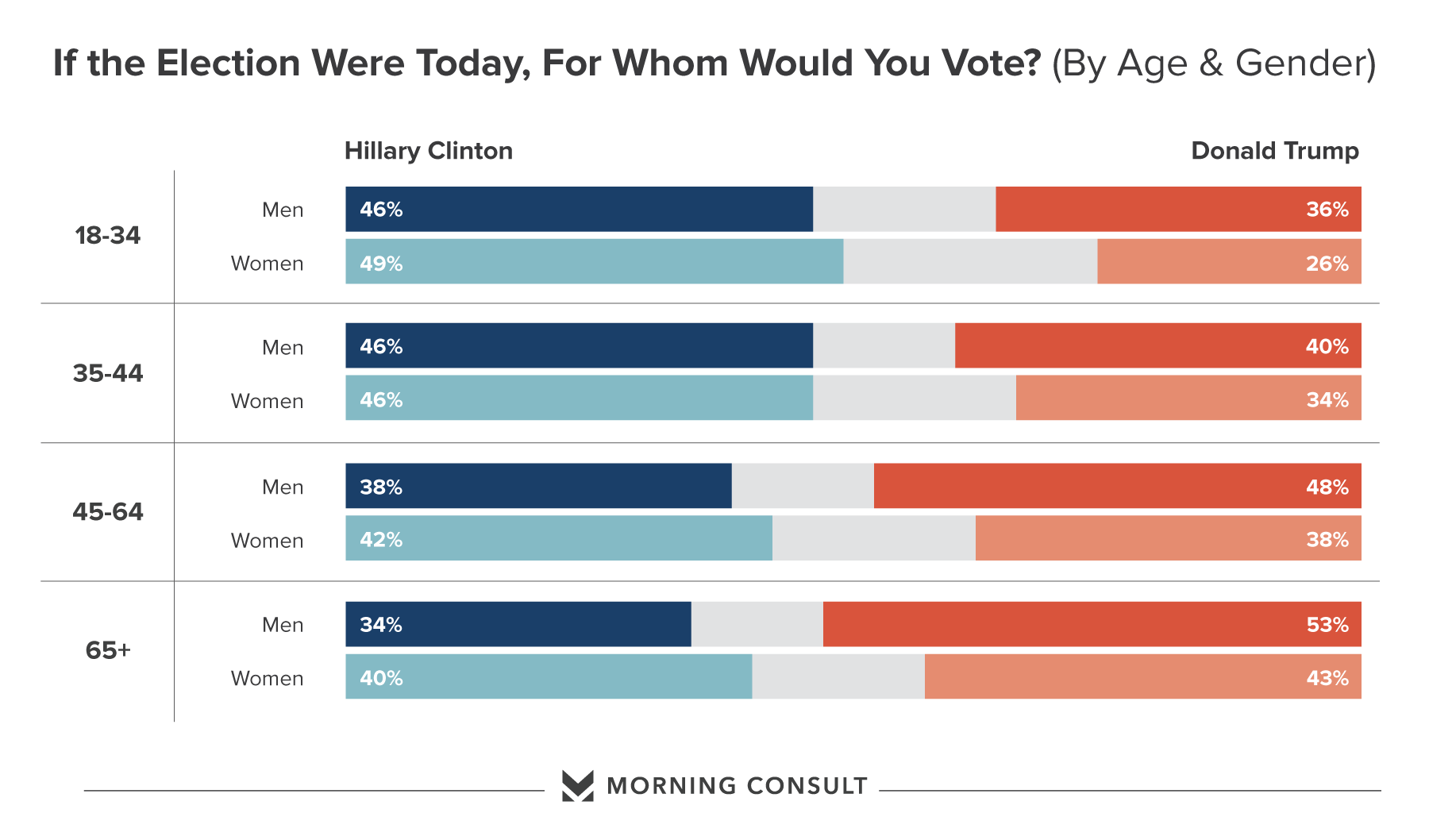 The youngest men also have been more likely to support Clinton (46 percent). About one-third of them (36 percent) said they are Trump supporters. That’s a much smaller support level for the real estate mogul than among men over 65, where 53 percent of them said they will cast their vote for Trump. Only 34 percent of men over 65 said they will vote for Clinton.

The oldest women are the only bloc in Morning Consult’s data to favor Trump over Clinton, 43 percent to 40 percent.

Morning Consult’s most recent poll, with a much smaller sample size of 2,502, shows that 42 percent of women support Trump, a big jump if it holds. That’s still lower than the 47 percent of men who are Trump supporters, but it shows that the Trump campaign’s outreach to women (particularly from his daughter Ivanka Trump) may have worked. About the same proportion of women (18 percent) are still undecided, while 14 percent of men are undecided.

When it comes to voters’ top issue, women (29 percent) were significantly less likely to select the economy than men (37 percent). But only 6 percent chose women’s issues as their top priority; 2 percent of men did so. Women and men were equally likely to say national security was their top concern, at 24 percent.