How Voters Feel About the Presidential Debate Moderators

The Commission on Presidential Debates on Friday named the hosts for this year’s debates, opting for two moderators who were among the most popular with voters in a recent Morning Consult survey.

Lester Holt of NBC News will moderate an expected debate between Democrat Hillary Clinton and Republican Donald Trump on Sept. 26, and Chris Wallace of Fox News will lead one on Oct. 19. CNN’s Anderson Cooper and Martha Raddatz of ABC News will co-host a town hall-style debate on Oct. 9.

“These journalists bring extensive experience to the job of moderating, and understand the importance of using expanded time periods effectively,” said Frank Fahrenkopf and Michael McCurry, who co-chair the debate commission, in a statement. “We are grateful for their willingness to moderate, and confident that the public will learn more about the candidates and the issues as a result.”

Cooper garnered the most support, at 34 percent, when Morning Consult asked voters last week about their top choices for debate moderators. Twenty-two percent preferred Wallace, the third top choice behind Fox News host Megyn Kelly, who was not selected by the commission. 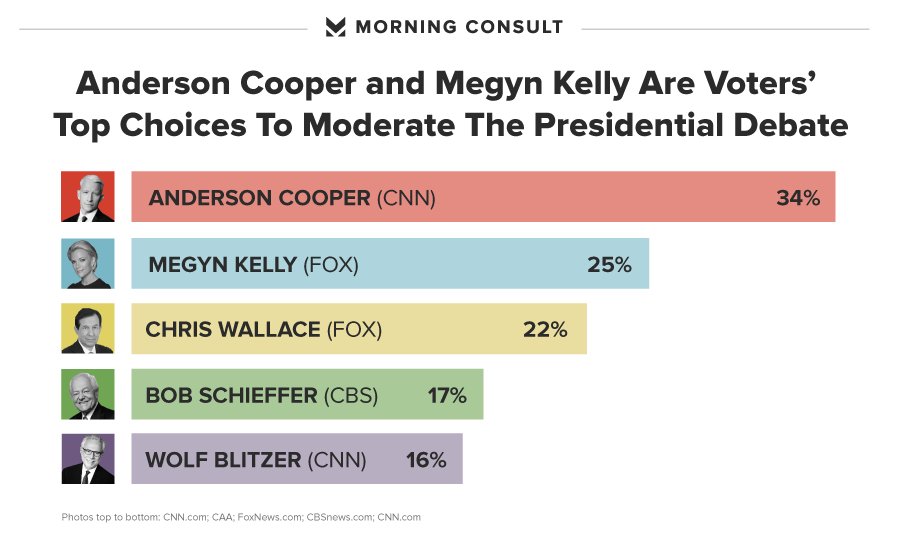 Holt was the fifth top choice, with the backing of 16 percent of voters, according to the Aug. 24 through Aug. 26 survey of 2,007 registered voters. The selection of Raddatz was supported by 8 percent of voters.

While voters generally view the media at large as supporting Clinton’s candidacy, they are split on the moderators’ partisan motivations. Almost 4 in 10 voters (38 percent) view Cooper as liberal, while 29 percent consider Wallace as liberal. More than half of voters (52 percent) said they did not know Holt’s leanings, along with 58 percent who did not know about Raddatz’s views.

Aside from Raddatz, who moderated a presidential debate on her own in 2012, this year will be the first time for the other three journalists. It will also mark the first time in more than a decade that CBS’s Bob Schieffer, who left the network earlier this year, will not moderate a debate, and the first time in 20 years that Jim Lehrer, who stepped down as the host of PBS Newshour in 2011, is not moderating one.

The debate commission also said that C-SPAN’s Steve Scully will serve as a backup moderator, in the event that one of the selectees is unable to participate.

See the toplines and crosstabs.