The GOP’s Plan to Keep Control of Internet Naming 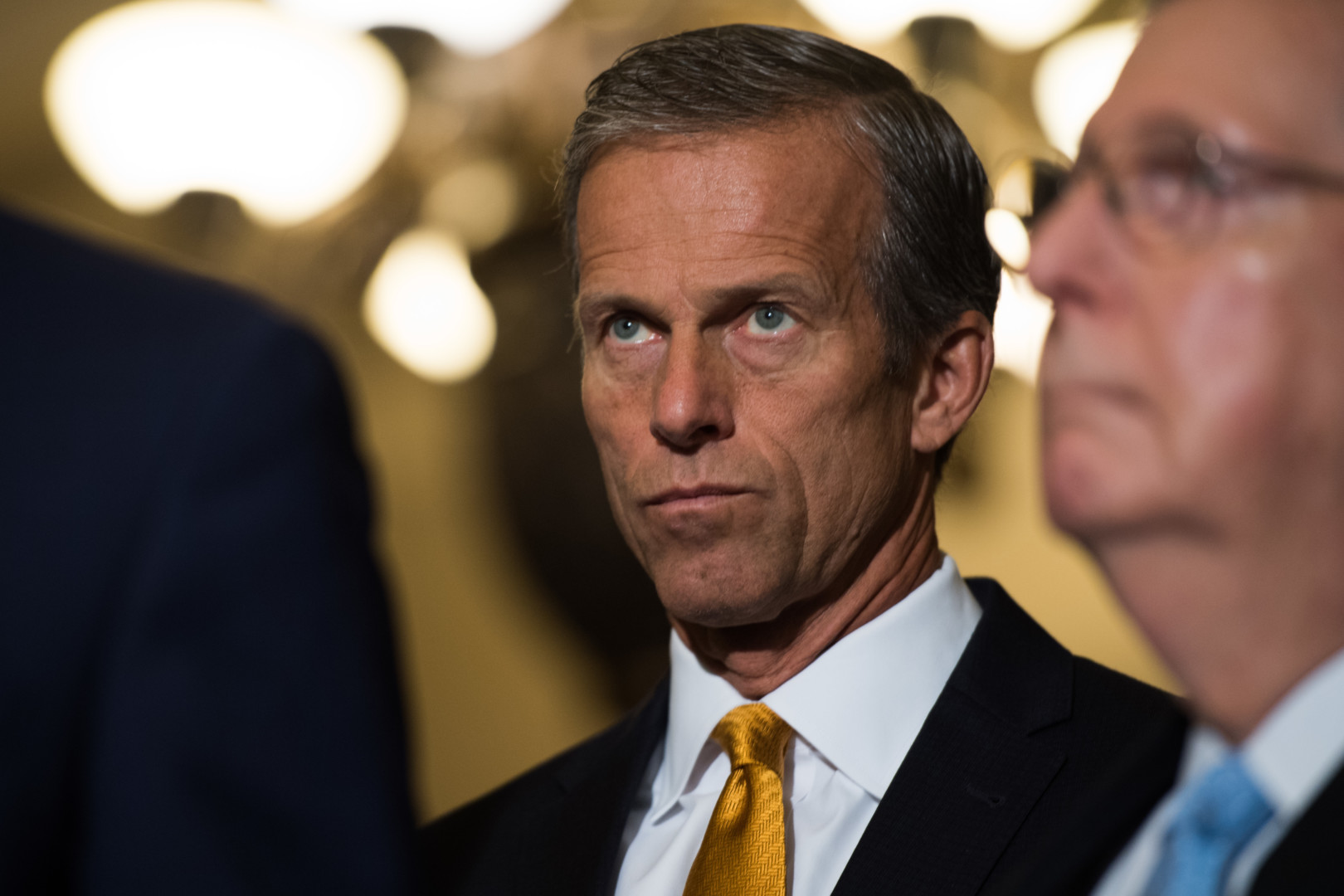 Thune says the GOP will likely try to halt the transfer via the appropriations process. (Rob Kunzig/Morning Consult)
By Amir Nasr

Senate Commerce Committee Chairman John Thune said Tuesday he “expects” language that would halt the transition of an internet governing body away from U.S. government control to make it into the upcoming continuing resolution to fund the federal government.

“Right now they’re trying to work out what that would look like, what would be effective in terms of putting the brakes on this,” the South Dakota Republican told reporters Tuesday. “I don’t think that anybody feels that we’re ready yet for that transition to take place, and so the question is how do you make that happen?”

Thune said that he expects the planned transition of the Internet Assigned Numbers Authority to be one of several issues that could push negotiations with Democrats over the CR into next week.

Meanwhile, the squabble over whether the U.S. should follow through on the transition heated up Tuesday as a report from the Government Accountability Office found that the upcoming transfer of power wouldn’t violate constitutional law.

The report, which also said the U.S. government has the authority to make the transition, debunks a major argument of lawmakers hoping to stop the transition.

The report was conducted in response to an inquiry from Sens. Chuck Grassley (R-Iowa) and Ted Cruz (R-Texas) as well as GOP Reps. Bob Goodlatte of Virginia and Darrell Issa of California. Researchers found that it is “unlikely” that the domain naming system or the “authoritative root zone file” of the internet are U.S. government property. Therefore, ceding control of them wouldn’t violate the Constitution.

The authoritative root zone file serves as a directory for the top-level domain names. The National Telecommunications and Information Association, an agency housed in the Commerce Department, has held a contract to control the Internet Assigned Numbers Authority and run these functions for the past 18 years.

NTIA is set to cede control of IANA to a nonprofit comprised of a global group of stakeholders, the Internet Corporation for Assigned Names and Numbers, on Oct. 1.

GOP leaders in the House and Senate, including Grassley and Goodlatte, wrote to U.S. Attorney General Loretta Lynch and Secretary of Commerce Penny Pritzker last week, urging them to “reconsider” moving forward on the transition. They said the transfer of U.S. property is one of several areas of “accountability” left unaddressed by the transition.

The GAO’s findings indicate that should not be a concern. “We did not identify any government-held copyrights, patents, licenses, or other traditional intellectual property interests in either the root zone file or the domain name system,” the report said. “It also is doubtful that either would be considered property under common law principles, because no entity appears to have a right to their exclusive possession or use.”

Any government property would be retained through the transfer of control over IANA, the report added.

The report was welcome news to the Commerce Department. “We thank the GAO for its thorough analysis of the property implications of the IANA transition,” Lawrence Strickling, NTIA Administrator, said in a Tuesday statement. “We are pleased that GAO concluded that the transition does not involve a transfer of U.S. government property requiring congressional approval.”

Researchers at the nonpartisan watchdog added that they do “acknowledge” that the proposed transition would result in the U.S. government vacating a position that is described as “providing ‘stewardship,’ an ‘accountability backstop,’ and a ‘safety net.’”

“Congress may wish to take steps to address the broader issues raised by the transition if it believes there should continue to be direct U.S. oversight and control,” the report said. But that point is unrelated to any merits of the transition plan.

It’s those “broader issues” that GOP members such as Cruz are hoping to capitalize on to stop the transition from moving forward.

Cruz has fought the transition for months, arguing that handing control of the internet’s core functions to a group with member nations that have weaker free speech laws could jeopardize the security and purity of the internet.

“Today our country faces a threat to the internet as we know it,” Cruz said in a video campaigning against the transition released Tuesday. “Do we want China, and Russia, and Iran having the power to determine that if a website is unacceptable, it’s taken down?”

Cruz has also voiced concern over the United States retaining control over domains such as .mil and .gov to avoid security issues with government or military websites.

The Texas Republican will chair a subcommittee hearing on the potential dangers of transitioning internet governance power on Wednesday. He is likely to discuss the Protecting Internet Freedom Act, legislation that would prohibit NTIA from allowing the IANA contract to expire unless authorized by Congress.

The tech industry, meanwhile, is staunchly in favor of ensuring IANA functions transition away from U.S. power at the start of October.

“The internet’s addressing system helps keep the internet global, scalable, and interoperable. It is imperative that Congress does not take action to delay the October 1st transition date,” a coalition of companies and groups including Google Inc., Facebook Inc. and Amazon.com Inc. wrote in a Tuesday letter to congressional leaders.

A separate letter was sent Tuesday to Congress from advocacy groups such as the Center for Democracy and Technology and the New America Foundation’s Open Technology Institute. It argued that the transition is not an “internet give-away” because the internet has always been a global phenomenon.