VP Debate Will Be All About Introducing the Candidates

Nearly seven out of 10 likely voters are likely to watch Tuesday’s vice presidential debate between Indiana Gov. Mike Pence and Virginia Sen. Tim Kaine, who both remain unknown to many Americans, according to a POLITICO/Morning Consult poll.

A majority of voters (52 percent) are unsure which candidate will win on Tuesday night. About one-fourth (24 percent) favor Pence, and 23 percent think Kaine will come out on top.

The national survey, conducted from Sept. 30 to Oct. 2, shows that 68 percent of registered voters are likely to watch the vice presidential debate on Tuesday, while just under one-third (29 percent) are unlikely to watch it. Just 3 percent of respondents said they do not know or have no opinion.

By comparison, 72 percent of voters said they watched last week’s presidential debate between Hillary Clinton and Donald Trump, which was the most-watched debate ever, according to another POLITICO/Morning Consult poll.

The poll consisted of 1,991 voters and has a margin of error of plus or minus 2 percentage points.

A large chunk of voters have yet to make up their minds about either candidate, according to a Morning Consult tracking poll conducted from Sept. 30 to Oct. 2. More than four out of 10 voters (41 percent) said they have never heard of or have no opinion of Kaine, and 33 percent said the same of Pence.

Among the national electorate, Pence is slightly more popular than Kaine, with 35 percent holding a favorable opinion of the Indiana Republican and 32 percent saying he is unfavorable.

Nationally, voters are split on Kaine, with 30 percent viewing him favorably and an equal percentage viewing him unfavorably. 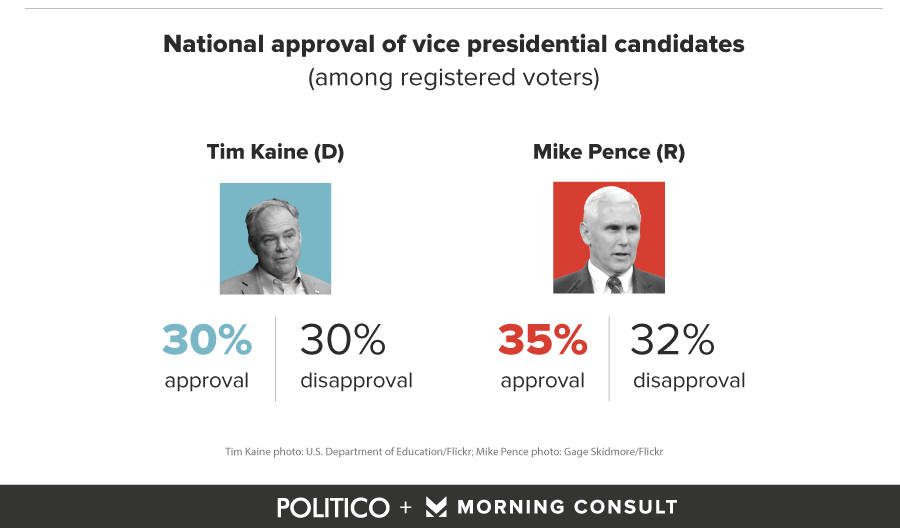 But in their respective states, Pence’s approval rating has taken a hit since he became Donald Trump’s running mate, while Kaine’s has not since he joined Hillary Clinton’s ticket, according to Morning Consult’s Senate and Governor Approval Rankings.

Pence’s approval rating in Indiana has declined from 48 percent in the first quarter of the year to 45 percent in September. During the same time frame, his disapproval percentage has risen from 39 percent to 45 percent.

Kaine’s approval rating in Virginia is at 54 percent, 1 point higher than in April. His disapproval rating from April to September increased from 24 percent to 26 percent.