A supermajority of voters agree: Donald Trump is not a role model for children.

A new POLITICO/Morning Consult survey  – conducted in the days after vulnerable Sen. Kelly Ayotte (R-N.H.) said during a debate that she “absolutely” thought the Republican presidential nominee was a role model for children – found just 17 percent of voters agreed, while 72 percent differed.

Related: 3 in 10 Trump Supporters Wish Pence Was Running for President

Even among Republicans, Trump fared poorly on the role model question. Only 33 percent of GOP voters — and just 37 percent of his supporters — answered in the affirmative. About half of Trump supporters (51 percent) said he is not a role model. 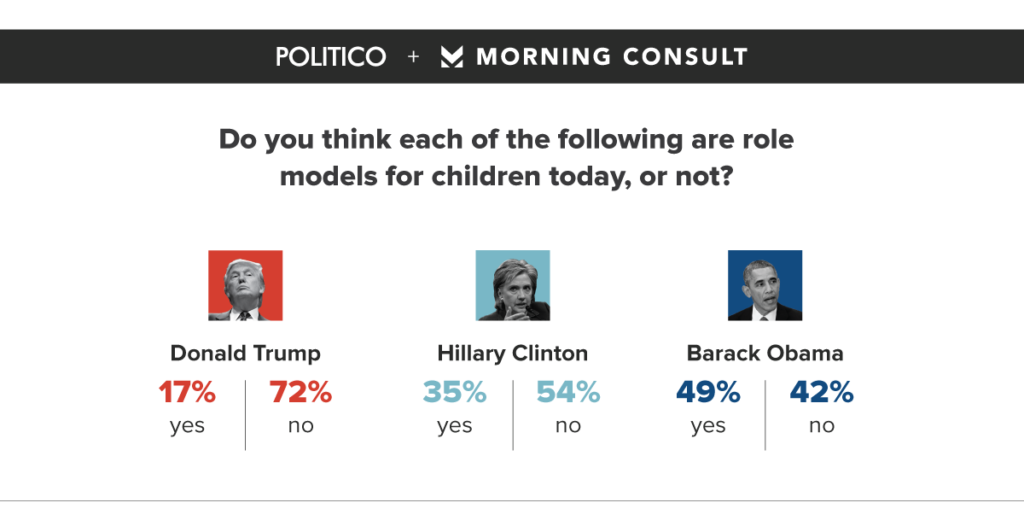 Ayotte has attempted to walk back on the remark made Monday evening, which has been used in a digital and television advertising campaign against her by Gov. Maggie Hassan, the Democratic Senate candidate. Shortly after the Granite State debate, Ayotte issued a statement saying she “misspoke,” and she added: “Neither Donald Trump nor Hillary Clinton have set a good example, and I wouldn’t hold up either of them as role models for my kids.”

To that point, most voters agree.

When asked the same question about the Democratic nominee, 35 percent of voters said she is a role model for children, while more than half of them, 54 percent, said she is not.

Clinton’s historic achievement as the first woman to be a major party’s nominee isn’t a big pull for women voters either. Only 37 percent of women said the former secretary of State is a role more for children.

Democrats (69 percent) and her supporters (72 percent) were much more likely to say she is a role model. Independents, meanwhile, were almost twice as likely (24 percent) to consider Clinton a role model than Trump (14 percent).

The low numbers underline the historic unpopularity of both major-party nominees.

As President Obama prepares to exit the White House, Americans are split on the standard he sets for the next generation. Roughly half of voters (49 percent) said the Oval Office’s current occupant is a role model (about the same percentage that approve of his job performance), but 42 percent said the opposite.

Democrats have already begun spending money in New Hampshire to try and take advantage of Ayotte’s gaffe, which contradicts with her mostly hands-off approach to questions about the top of the ticket. But at the national level, voters were most likely to say that whether a another candidate considers Trump or Clinton a role model would not have an effect on their vote for that person; 41 percent chose that option for a candidate that said Trump wasn’t a role model, and 42 percent chose that option for Clinton.

The Morning Consult survey polled 1,989 registered voters from Oct. 5-6 for a margin of error of plus or minus 2 percentage points. See toplines and crosstabs.