FBI Review of Clinton Emails Has Little Effect So Far

Donald Trump gained three points against Hillary Clinton in the final days of the presidential campaign, tightening the race before news broke of further federal review of the former secretary of State’s emails.

The numbers did not move after FBI Director James Comey sent a letter to Capitol Hill Friday, alerting committee chairmen of an additional review of emails related to the Clinton investigation. Trump gets 39 percent support in a four-way race against Clinton, Libertarian Gary Johnson and Green party candidate Jill Stein in the latest Morning Consult and POLITICO poll. Clinton gets 42 percent.

Morning Consult conducted a survey Oct. 27-28 and found Trump had gained three points, moving from 36 percent support after the third presidential debate to 39 percent a little more than one week later. Clinton remained at 42 percent. We conducted a second poll hours after Comey’s letter was sent, and found support for both candidates did not move. The polls were conducted online with 1,794 likely voters and 1,772 likely voters, respectively. 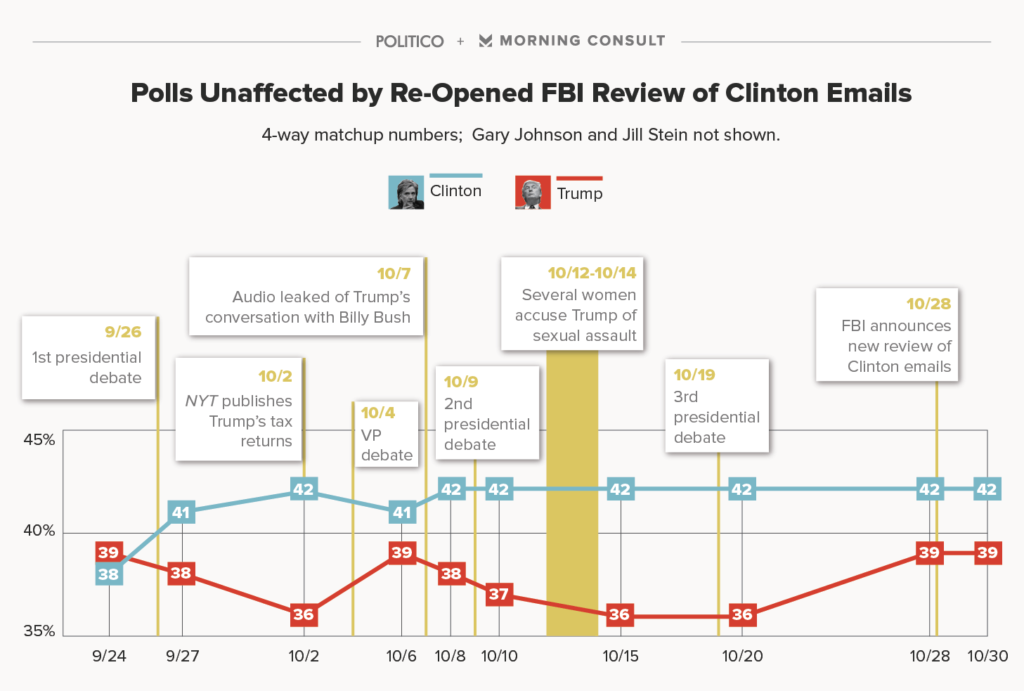 More people are worried that an investigation into Clinton’s email will continue into her administration, 61 percent, than the 47 percent who think the same could happen to Trump and cases on Trump University.

Nearly half of those surveyed, 45 percent, say the Clinton emails were worse than the Watergate scandal, a talking point Trump has hammered since news broke Friday. More than eight in 10 Republicans say it is worse than Watergate.