The Coming Week: GOP to Lay Groundwork for Next Congress 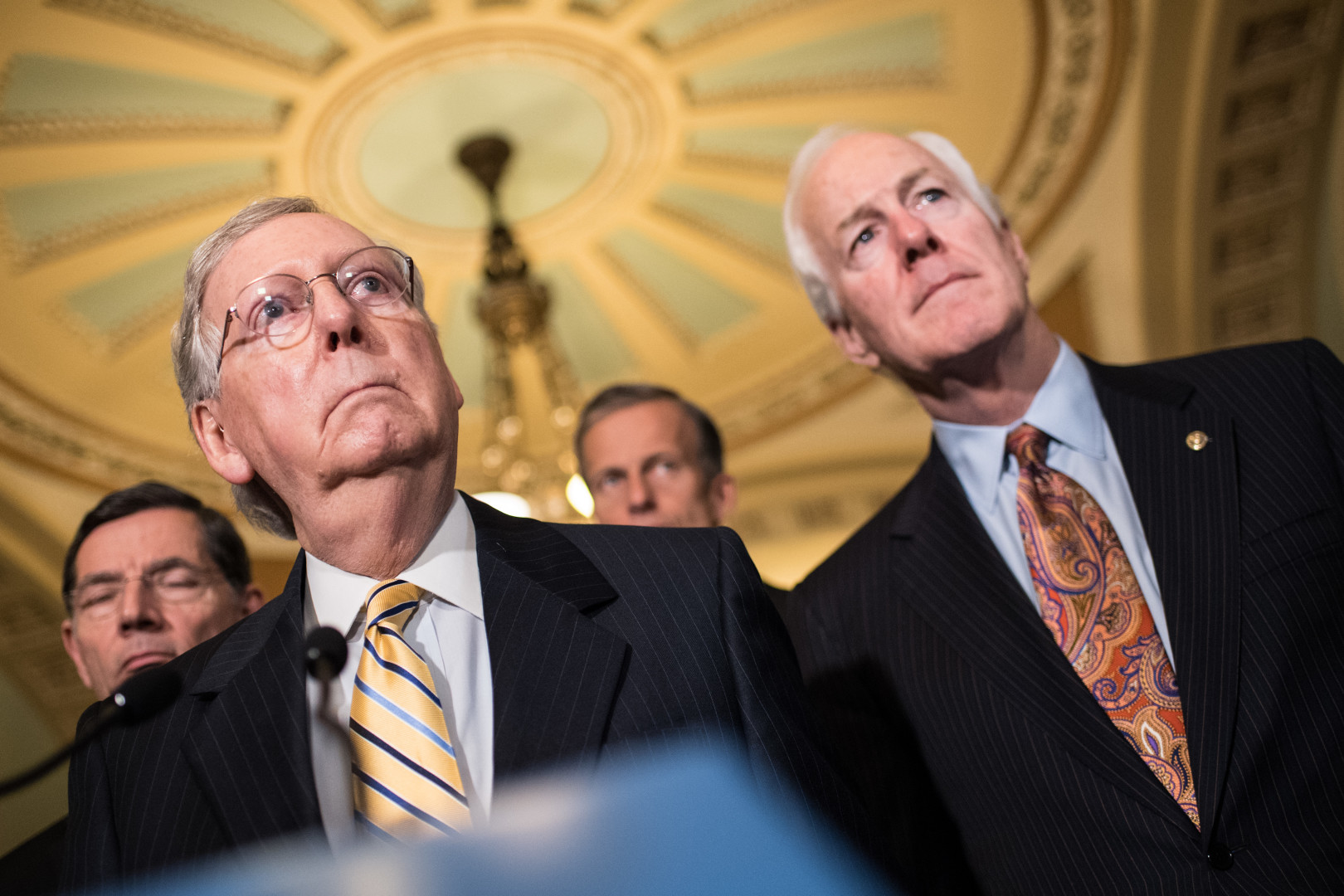 After a tumultuous election, the House and Senate reconvene in the coming week for the lame-duck session.

Don’t expect lawmakers to do much policy-making immediately. The first focus will be on new member orientation and leadership elections for the 115th Congress.

Here is a rundown of what is expected to happen this week and in the succeeding weeks of the lame-duck session.

— Member-elect orientation in the House begins on Monday.

— The only high priority expected to come up this week is in the House, where lawmakers are scheduled to vote Tuesday to renew the Iran Sanctions Act.

— Senate Democratic leadership elections are scheduled for Wednesday. Sen. Chuck Schumer of New York is the anointed successor to outgoing Senate Democratic Leader Harry Reid (D-Nev.). But there is uncertainty about the No. 2 spot in leadership, where incumbent Minority Whip Dick Durbin (D-Ill.) could face a challenge from Sen. Patty Murray (D-Wash.).

— Senate GOP leadership elections are also expected as soon as this week, but a formal date hasn’t been set. There are no expected upsets among current Republican leaders.

Expectations for the lame-duck session:

— CR or Omnibus? Government funding is set to expire on Dec. 9. GOP leaders are weighing whether to vote on a spending bill that would extend funding through Sept. 2017 or pass something smaller. McConnell said Wednesday that he would “like to wrap up the business of funding the government in this fiscal year this calendar year,” an indication that he would rather not revisit government funding in the spring. But there is pressure from conservatives to do a short-term measure. They want to avoid negotiating another spending deal with President Obama and are calling on GOP lawmakers to rally behind a clean stopgap bill that would expire after President-elect Donald Trump takes office.

— Defense. Another must-pass item is an annual defense policy bill, which is now in conference. A fight is brewing on the $602 billion measure over a House-passed provision that Senate Democrats are demanding be removed. The provision, they say, would allow workplace discrimination based on gender orientation for federal contractors.

— Medical Innovation. GOP leaders in the Senate and House are working on the 21st Century Cures Act, a wide-ranging medical innovation measure, with an aim toward passing it in both chambers before the end of the year.

— Water Infrastructure. Senate and House negotiators are expected to convene in conference on a water infrastructure bill. Funding to address the drinking water crisis in Flint, Mich., is a key part of the debate.

— Criminal Justice Reform. House Speaker Paul Ryan (R-Wis.) wants the chamber to take up a series of bills to reform the nation’s criminal justice system. It is unlikely that that Majority Leader Mitch McConnell (R-Ky.) will have the Senate take up a similar bill because of intraparty divisions, but he hasn’t ruled it out.

— Medical Innovation Bill. Reps. Fred Upton (R-Mich.) and Frank Pallone (D-N.J.) and Sens. Lamar Alexander (R-Tenn.) and Patty Murray (D-Wash.) are negotiating a final deal on the 21st Century Cures Act. New funding for the National Institutes of Health has been holding up a deal for months, but liberal groups last month urged Democrats to delay advancing the measure until next year so that it could address prescription drugs costs.

— HELP Committee Upset? If Sen. Patty Murray (D-Wash.) seeks the No. 2 spot among Senate Democrats, that would leave an open spot for ranking member of the Health, Education, Labor and Pensions Committee. Sen. Bernie Sanders (I-Vt.) is next in line for the spot, but he is also the ranking member on the Budget Committee.

— Energy Bill. Members of the conference committee on the House and Senate energy bills are slated to finish work on a compromise. But the Republican sweep of the White House and Congress may complicate the push for some progressive measures, such as energy efficiency standards.

— WRDA Conference. Lawmakers will also hold a conference committee to reconcile the House and Senate Water Resource Development Act bills. The Senate bill includes funds for Flint, Mich., but the House bill does not.

— International Meeting on Paris Accord. On Monday and Tuesday, Energy Secretary Ernest Moniz will attend the international climate change meeting in Marrakesh, Morocco.

— Reg Relief Bill on House Floor. On Monday, the House Rules Committee will hold a hearing on the Midnight Rules Relief Act, which would place a moratorium on new rules and regulations from the president. That House will vote on the bill later in the week.

— On Wednesday, the Senate Appropriations Committee’s energy and water subcommittee will hold a hearing on the future of nuclear power.

— On Tuesday, a House Natural Resources subcommittee will hold a hearing on a bill sponsored by Rep. Diane Black (R-Tenn.) that would hand control of energy development on federal lands to the states.

— On Tuesday, a Natural Resources subcommittee will also hold a legislative hearing on a bill sponsored by Rep. Jason Chaffetz (R-Utah) on a conservation area in Utah.

— Omnibus riders. If Congress opts for a year-long omnibus spending bill, Democrats want to strike language from the FY 2016 bill that bars the Securities and Exchange Commission from implementing disclosure requirements on the political donation activities of publicly traded companies.  Maintaining that rider is one of McConnell’s pet causes.

Secondly, members of both parties also support a rider that would lower the quorum of the Export-Import Bank, which is currently hamstrung from approving financing exceeding $10 million. With Trump’s victory, Democrats have less leverage to push for these riders in a stopgap spending bill. David Popp, a spokesman for McConnell, said a continuing resolution means “current law” would continue to remain in place.

If GOP leaders opt for a CR instead of an omnibus spending bill, the SEC language would remain in place and the Export-Import Bank language would not be included.

— SEC Hearing. On Tuesday, the House Financial Services Committee will hold a hearing about the operations and agenda of the Securities and Exchange Commission. Chairwoman Mary Jo White will appear before the panel.

— Garrett Replacement. Members of the House Financial Services Committee will need to find a new chairman of the subcommittee on capital markets and government sponsored enterprises — one of the main mechanisms for managing the relationship between Congress and Wall Street. Rep. Scott Garrett (R-N.J.), the current chairman, lost his bid for re-election.

— FCC Vote on Bulk Data. The Federal Communications Commission will hold its monthly open meeting on Nov. 17. The commission is slated to vote on its business data services proposal, which would place uniform price caps on all bulk-data services operating through older technology at speeds of less than 50 Mbps.

— IoT Guidelines. The White House and the National Institute of Standards and Technology plan to release final federal guidelines on “Internet of Things’ (IoT) security on Tuesday. The guidelines are being unveiled a month ahead of schedule due to the Oct. 21 distributed denial of service attack that knocked large portions of the internet offline, and are expected to give direction on how to prevent and defend against IoT-directed attacks.

— On Tuesday, House Energy and Commerce Subcommittee on Commerce, Manufacturing, and Trade will hold a hearing on self-driving cars. Members are expected to review the Federal Autonomous Vehicles Policy guidelines unveiled by the Department of Transportation and the National Highway Safety in September. The hearing is part of the committee’s “disrupter series,” which examines the federal government’s role in regulating emerging technologies.

— On Wednesday, the House Energy and Commerce Subcommittee on Communications and Technology has scheduled a hearing to examine the role of connected IoT devices in last month’s large-scale distributed denial of service attack against America’s internet infrastructure. Top committee Democrats Frank Pallone of New Jersey and Jan Schakowsky of Illinois sent a letter last week to the Federal Trade Commission pushing for tougher cybersecurity regulations on IoT technology.