President-elect Donald Trump’s refusal to divest from his web of businesses has concerned ethics watchdogs, and according to a new survey, most Americans think he’ll do what’s best for his businesses when he’s in the White House. Whether voters think that’s good or bad depends largely on their partisan leanings.

A Morning Consult/POLITICO survey conducted Dec. 8-11 found that 81 percent of voters say it is likely Trump will take actions to benefit his businesses when he becomes president next month. And while there is much agreement there, voters were split along partisan lines on whether it was good or bad for his business interests to affect his decision-making as president: 39 percent of voters said it was mainly a good thing, including 73 percent of Republicans, and 44 percent said it was mainly a bad thing, including 73 percent of Democrats. 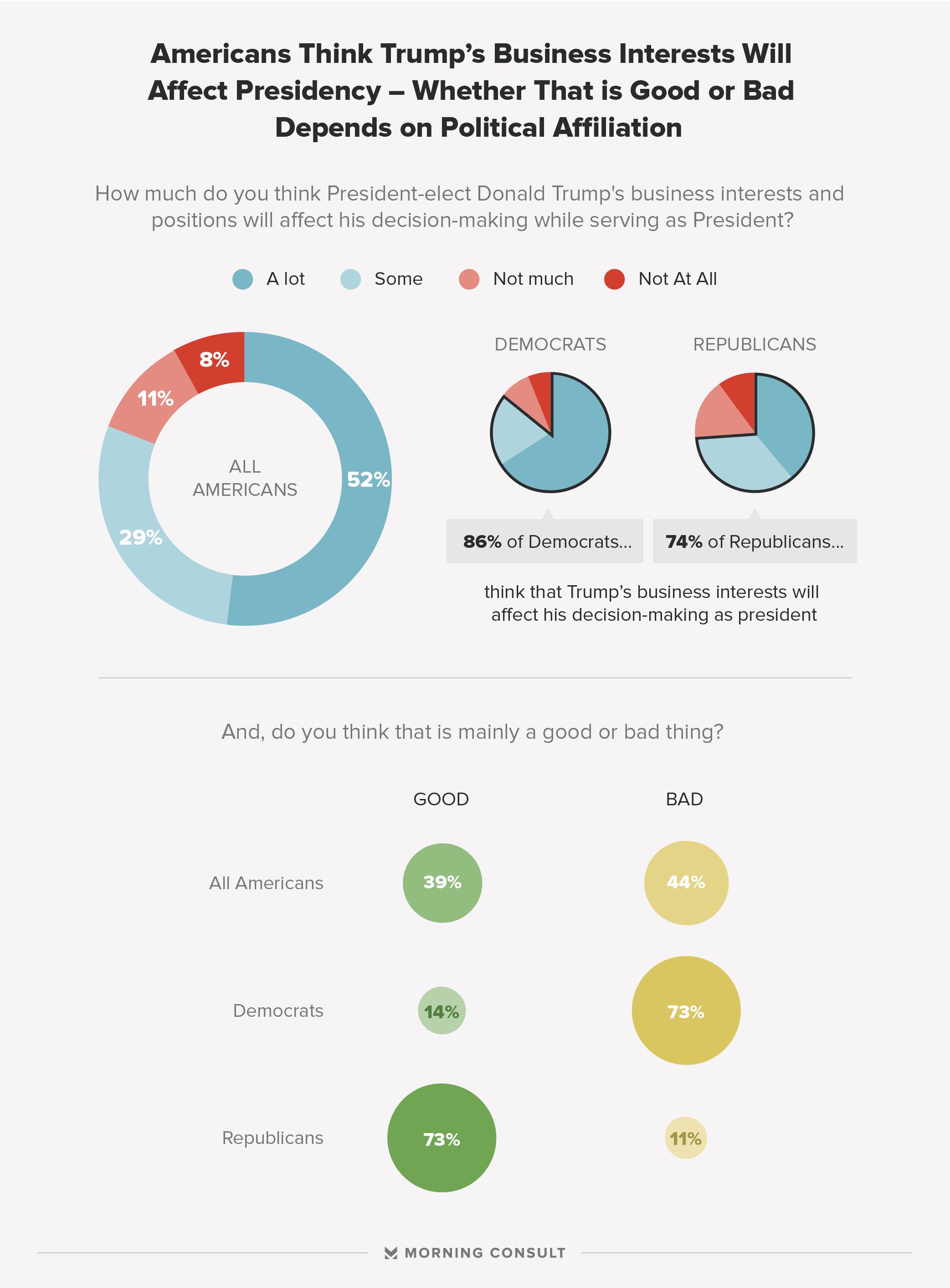 The president-elect was set to hold a news conference Thursday detailing his efforts to place his companies in the control of his children. But on Monday night, Kellyanne Conway, a senior adviser to Trump who managed his campaign, told CNN’s Anderson Cooper the announcement will be delayed as they consider the “best organizational structure” for Trump’s finances. She said he still intends to cede operational control to his children.

“Everybody wants to get it right,” she said.

Because he refused to follow the modern presidential tradition of releasing his tax returns during the campaign, Trump’s business ties are not fully known. But, he is believed to be involved in a wide range of companies, from owning golf courses to managing hotels, including one just blocks away from the White House.

Nearly 8 in 10 voters (79 percent) said it was important for Trump to remove himself from the operations of his businesses before Inauguration Day on Jan. 20. That figure isn’t limited to Democrats, either. While 86 percent of Democrats said Trump should be separated from his businesses, 76 percent of Republicans said they agreed.

But regardless of who is in control of the Trump Organization, 69 percent of voters said it’s likely Trump will take actions to benefit his businesses while serving as president, including 43 percent who said it’s very likely. Almost 9 in 10 Democrats (86 percent) and 52 percent of Republicans said it was likely he would act to benefit his businesses, and just less than a quarter (22 percent) of voters said such an outcome was not likely.

Half of voters believe Trump should place his assets in a blind trust, and voters are most likely to say he should divest his stocks in companies with government contracts and his foreign holdings.

And as Trump plans to stay on as executive producer of NBC’s “The Apprentice,” voters are also split — 39 percent in favor vs. 38 percent against — on whether he should continue to receive payments and credits from the program.