President-elect Donald Trump has rattled the media establishment by making big policy and political pronouncements on Twitter, but Americans say more traditional methods of communication are most effective for getting a president’s message across.

In a Morning Consult/POLITICO poll conducted last week, most voters said speeches (84 percent) and press releases and statements (83 percent) were the best ways for a president and administration to communicate with the public.

More from the Morning Consult/POLITICO poll: What Voters Want to Hear Most in Trump’s Inauguration Speech

Those traditional methods, with speeches being utilized by presidents since the country’s founding, easily beat out newer methods, such as social media platforms Twitter and Facebook. Forty-six percent of voters said Facebook is a very effective way to communicate, and 44 percent said the same about Twitter. 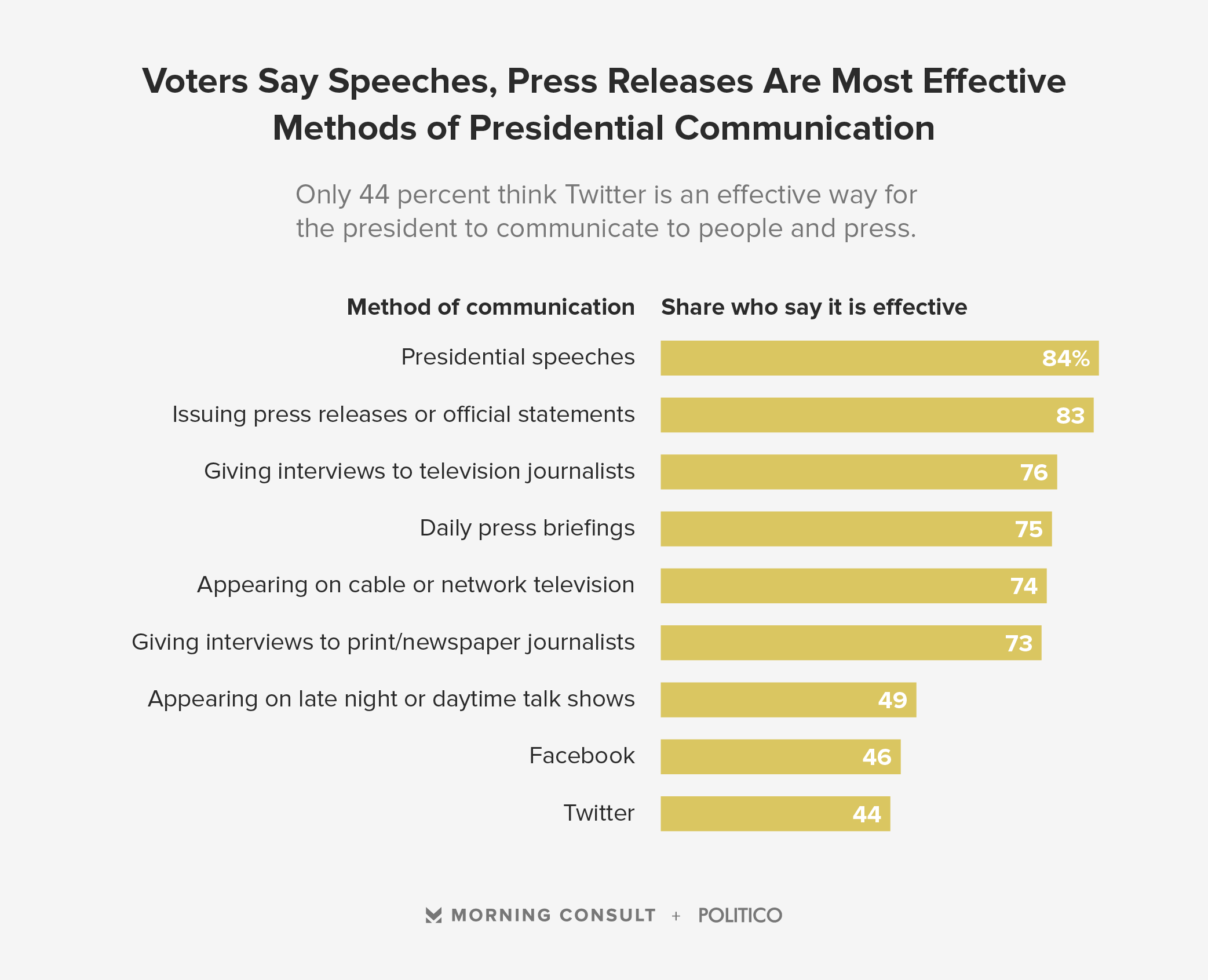 Still, Trump’s online activity appears to have been remarkably effective in garnering attention and manipulating the media narrative.

As recently as Tuesday, his tweets about changes to House rules, backed by most Republican lawmakers the previous day, came just an hour before the conference held an impromptu meeting to scuttle a plan to gut the Office of Congressional Ethics.

More from the Morning Consult/POLITICO poll: Who Would Win Between Trump and Obama? We Asked Voters

Before that, his missives about businesses with federal contracts moved markets, and tweets about adversarial countries created tension in the diplomatic community.

“With all due respect, America cannot afford a Twitter presidency,” the New York Democrat said.

Journalists have raised qualms about the possibility of Trump’s administration shifting away from traditional communication norms, such as a daily White House press briefing, which is viewed as effective by 75 percent of voters.

Almost eight in 10 voters (78 percent) described the daily press briefing as “important,” while 34 percent characterized it as “very necessary.” Almost half of voters (48 percent) said they were willing to support changes to the briefings, such as replacing them with a “different, potentially less frequent briefing.”

Among other ways of communication, about three-fourths of voters described interviews with television journalists (76 percent), cable or network TV appearances (74 percent), or interviews with print reporters (73 percent) as effective.

The poll, which surveyed 2,000 registered voters from Dec. 28 through Dec. 29, has a margin of error of plus or minus 2 percentage points. See the full results here.