The Super Bowl is still four days away, but for more than a week now some brands have been looking to create buzz by releasing their ads early in hopes of wooing viewers, particularly millennials.

Skittles is one brand that seems to be achieving that goal, according to a recent Morning Consult poll. Respondents in the 18- to 29-year-old demographic loved Skittles’ 30-second “Romance” ad featuring a young admirer trying to attract the attention of his crush by throwing pieces of the fruit-flavored candy through her bedroom window. Fifty-one percent of adults under the age of 30 gave the ad a 10-out-of-10 ranking.

Sixty-nine percent of young adults said the commercial gave them a more favorable impression of the candy; 51 percent of all respondents said the same.

That’s good news for Skittles, a brand that views the Super Bowl as an opportunity to “relevantly reach a wide variety of new people and create an occasion to enjoy Skittles,” spokeswoman Jackie Zureich wrote Tuesday in an email to Morning Consult. Skittles is among the Wrigley brands and a subsidiary of candy-maker Mars Inc. 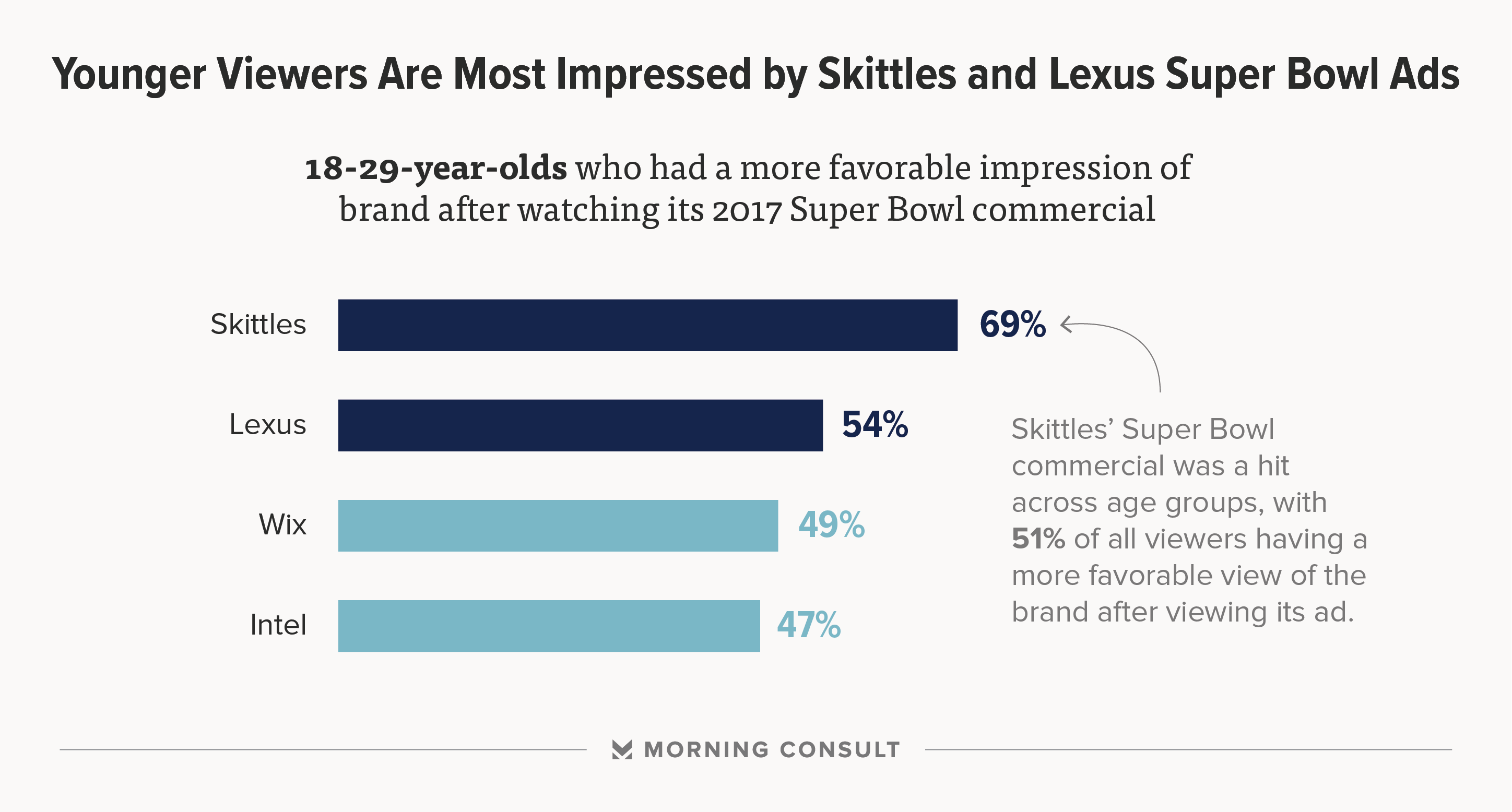 Lexus, the luxury brand from Toyota Motor Corp., on Jan. 23 released its “Man and Machine” ad, which aims to broaden the brand’s appeal to consumers. Forty-one percent of poll participants said the 60-second commercial gave them a more favorable view of Lexus. It was an even bigger hit among young adults, with 54 percent of 18- to 29-year-olds saying they view Lexus more favorably now.

Brian Bolain, the general manager of Lexus, said the brand doesn’t participate in the Super Bowl every year. But with a dual-vehicle rollout this year, it seemed like the right time.

The ad itself is geared toward the Super Bowl audience at large, Bolain said. The goal of the spot is to inspire brand advocates, be it through the ad’s music or its featured dancer.

“We try to connect on different levels because we can’t always just talk about cars,” Bolain said in an interview.

The ad also played well with the demographic that’s in the best position to purchase a Lexus. Forty-nine percent of respondents who make at least $100,000 a year said the commercial improved their perception of Lexus.

The manufacturer’s suggested retail price for the car featured in the commercial — the Lexus LC — is $92,975, according to Car and Driver.

The poll was conducted Jan. 26 through Jan. 28 among 2,200 adults with a margin of error of plus or minus 2 percentage points.

Correction: A previous version of this story included a graphic that cited a Bud Light ad that wasn’t slated to air during the Super Bowl. The reference to Bud Light has been removed.