Don't use this - photos of screens are dull and suck energy!
By Amir Nasr

In the heated political climate of the past year, Facebook and Twitter have become hotbeds for partisan commentary, and a survey of thousands of adults shows that the social media platforms are less popular among those who voted for a third party in the 2016 election or didn’t vote at all. 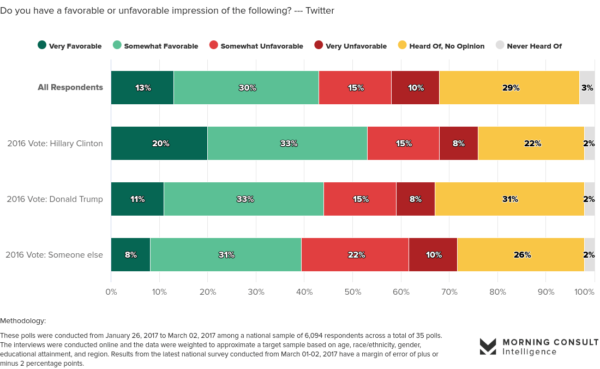 With Twitter, that difference was slightly more stark — 53 percent Clinton voters and 44 percent of Trump voters viewed the social media site favorably, compared with 39 percent of those who voted third party or didn’t vote at all. 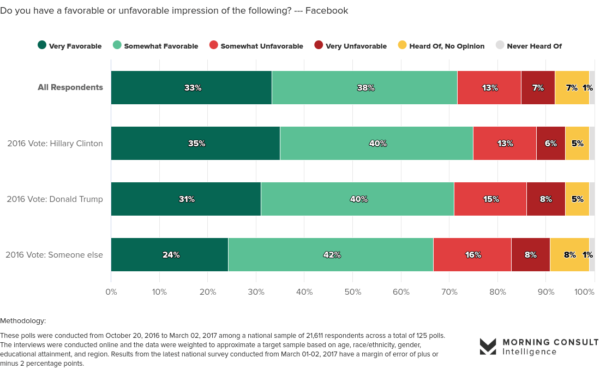 The social media landscape for politics and news has grown exponentially over the past few years. Facebook spokesman Andy Stone said the company calculated 7.5 million people generated 20.5 million likes, posts, comments and shares about President Trump’s address to a joint session of Congress on Tuesday night.

On Election Day, 118 million people on Facebook generated 716 million likes, posts, comments and shares about the election, he said. On Nov. 7, the day before the election, Twitter reported that since the beginning of the primaries in August 2015, people in the United States had tweeted 1 billion times about the presidential race.

The Morning Consult survey found pluralities said Facebook and Twitter have positive impacts on their local communities, though again fewer third-party and non-voters found that to be the case.

Fifty-six percent of Clinton voters and 53 percent of Trump voters said Facebook positively affects their communities, while 45 percent of those who didn’t vote Democrat or Republican in 2016 agreed.

The numbers were lower for Twitter, where 41 percent of Clinton voters and 36 percent of Trump voters said Twitter had a positive effect on their local communities, compared with 31 percent of those who voted third party or didn’t vote at all. Twitter’s lower numbers come because respondents were largely ambivalent about the social network’s impact: 45 percent of all respondents said Twitter has no impact or they don’t know or have an opinion if they do.

A Pew Research Center report from October showed some of Americans have concerns about political discourse online. Over a third said they were “worn out” by the amount of political content they see on social media and nearly half (49 percent) said political discussions were more angry on social media than they would be elsewhere.