Polls have shown varying levels of support for President Donald Trump’s controversial, stalled executive order temporarily banning refugees and citizens from seven predominantly Muslim countries from entering the United States. A new Morning Consult study shows that how questions were phrased on the issue does little to affect voter sentiment.

Morning Consult surveyed more than 22,000 registered voters across the U.S. from Feb. 10 through Feb. 27 (see more here and here), phrasing questions on the ban in 96 different ways in order to examine discrepancies in responses.

Overall, support for the ban remained relatively high, regardless of how the questions were constructed. Whether the executive order was called a ban or a block did not make much of a difference. Neither did describing its length, or providing more specific information on the countries affected themselves.

The largest deviation in responses came from how the people from the Middle Eastern countries affected by the ban were described. Support for the ban is 4 percentage points higher, 55 percent approve vs. 51 percent approve, when the population is described as “people” rather than “people, including U.S. lawful permanent residents and visa holders originally.” Still, a majority of Americans surveyed were supportive of the ban, and the discrepancy on those responses was right outside the surveys’ margin of error of 2 percentage points.

Trump has yet to sign a promised, revised executive order restricting travel to the U.S. The new order is expected to exempt legal U.S. residents from its effects, while also removing Iraq from the list of countries affected, according to news reports. The Morning Consult study suggests stronger support for the order if these changes are made.

So while question-wording does matter some, the study suggests that whether people were interviewed online or by phone, and how the interviews were collected, explains much of the differences across the polls. The surveys which indicated less support for the ban over the past month have largely been conducted via telephone, while online polls reveal higher support.

During the 2016 presidential campaign, Morning Consult examined mode effect twice when measuring Trump’s support among the public. Both times, Morning Consult found that respondents were more likely to admit they were backing Trump in online surveys than in phone interviews, although the effect was more muted in the general-election phase of the campaign. There appears to be a similar dynamic affecting reaction to the president’s travel ban, which has remained snarled in the courts.

Overall, 54 percent of registered voters approved of the executive order and 40 percent disapproved of it. Six percent did not have an opinion either way. Approval was 20 percentage points higher among seniors (58 percent) than among adults under 30 years old (39 percent). Republicans (85 percent) were three times as likely to approve as Democrats (29 percent), and men (59 percent) were 10 percentage points more likely to approve than women (49 percent).

Voters living in the South and Mountain West were most likely to approve the ban. In these states, 60 percent or more of registered voters approved of the ban. By contrast, approval for the ban in California and in the Northeast was much lower, around 40 percent. 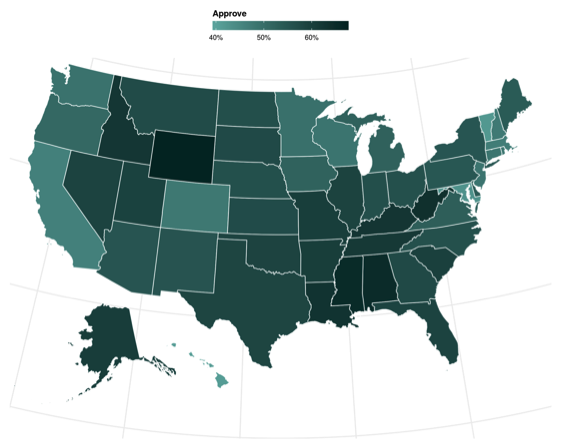