Yahoo Inc. saw a 10 percentage point dip in its favorability among consumers in the weeks after its December disclosure of the largest commercial data breach in history, according to a survey of more than 22,000 Americans.

That decline comes as Verizon Communications Inc. nears its purchase of Yahoo’s core internet business after the telecommunications firm secured a discount from the initial price tag because of Dec. 14 revelations that hackers stole data linked to more than 1 billion Yahoo accounts in August 2013. That followed a 2014 breach that compromised more than 500 million accounts. 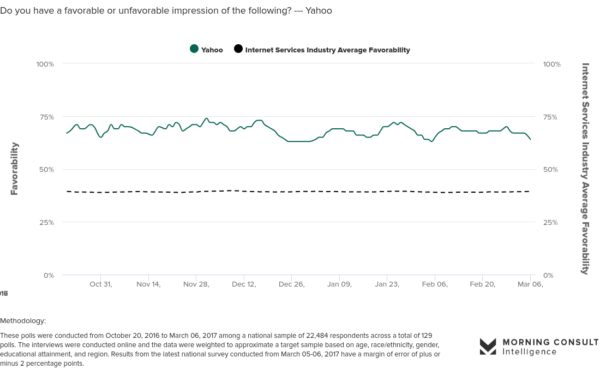 The drop in favorability wasn’t as dramatic as the one experienced by Wells Fargo following revelations of its consumer fraud scandal in September. Morning Consult data shows the bank’s favorability went from about 60 percent in August to 42 percent in February.

Still, Yahoo’s favorability average on March 6 is at 64 percent, just 1 percentage point higher than 11 days after the data breach announcement.

The favorability data on any given date reflect an average of the data gathered over the past seven days.

Verizon received a $350 million discount on its $4.8 billion initial asking price due to the disclosure of those breaches, the companies disclosed in a Feb. 21 statement. The deal is scheduled to close by June 30.

Roger Entner, a telecom expert and the founder of Recon Analytics, says $350 million is a much smaller amount than what Verizon should have demanded.

“In this game of chicken, Verizon clearly blinked first, because time was on their side, leverage, you name it, everything was on their side,” Entner said in a Monday interview, adding that public opinion must also be on Verizon’s side after two of the “worst-ever cyberattacks and the compromised cookies.”

While Verizon had to acquire Yahoo to “make their internet strategy stick,” Entner said the telecom giant still had all the leverage in the deal because if they had pulled out Yahoo “would have been the leper of the tech community” after all the problems they have experienced.