President Donald Trump’s ability to withstand scandals that would seemingly bring down other politicians is well-established, and his first two months in office have shown the outrage-a-week rhythm of the campaign will continue.

The scandals, real or imagined, produce hours of coverage and plenty of Twitter traffic. But do they register with the American public? Or is “Teflon Don” truly impervious to the rules the punditry said applied to politicians?

To test this, we asked voters whether scandalous events from Trump’s first two months in office gave them a more or less favorable view of the president. We found that after each of the seven events we tested, from the size of the inaugural crowds to Russia, a plurality of voters had a more negative view of the president. 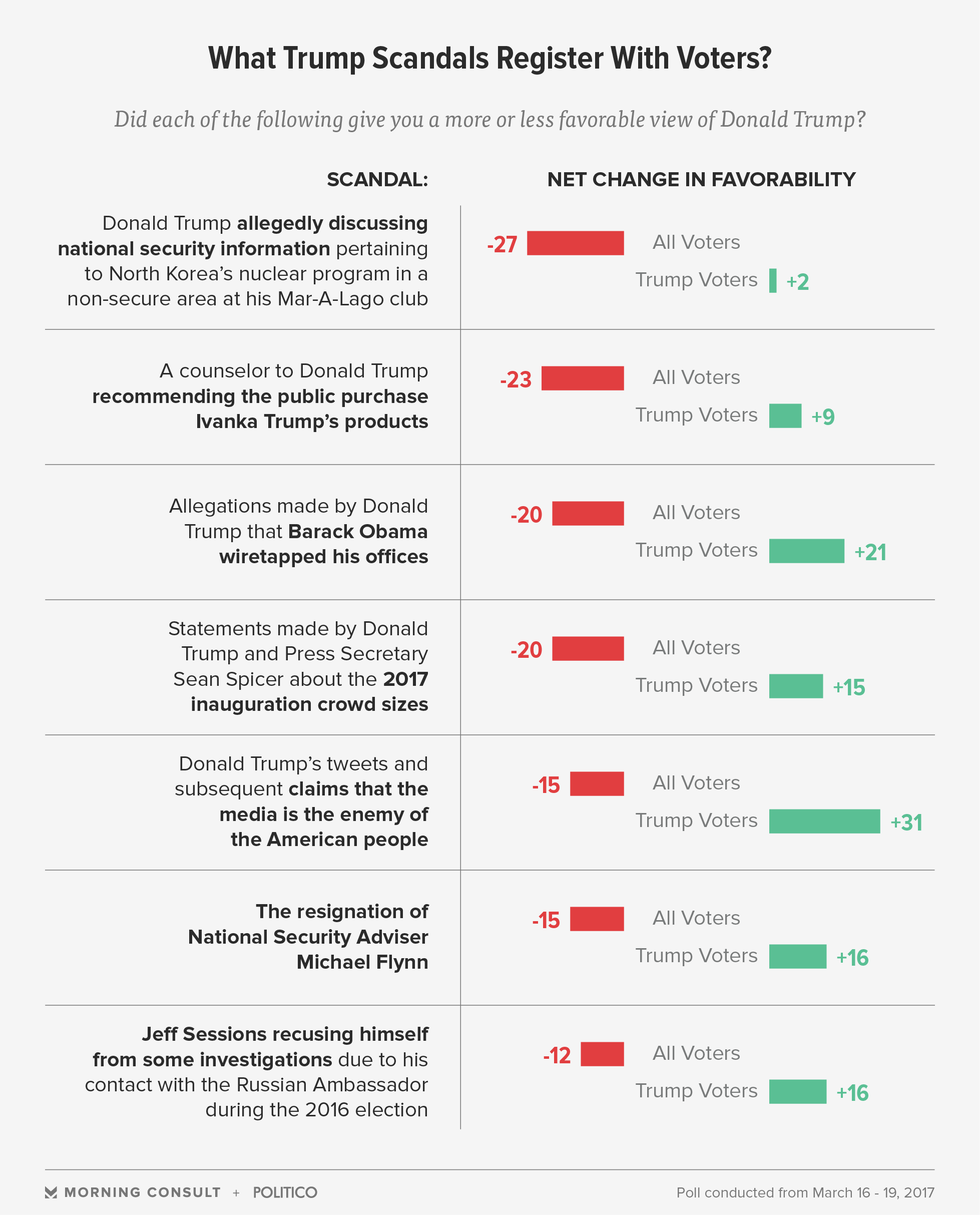 One place where Trump voters and all voters agreed? Mar-a-Lago. The idea that Trump discussed national security and North Korea on the terrace of his Florida golf club prompted the most people to say they had a less favorable view of Trump (46 percent of registered voters, 25 percent of Trump voters).

After that, Trump voters and the entire sample diverge. Following Mar-a-Lago, Trump’s tweets saying the media was the enemy of the American people and his accusation that President Barack Obama wiretapped him were the most damaging to Trump’s approval (43 percent of voters said both prompted a less favorable view of the president). Among people who voted for Trump? Those tweets were the most likely to give them a more positive view of the president.

The media-as-enemy tweet in particular was a hit with Trump voters, with 48 percent saying it gave them a more favorable view of the president. That is nine points higher than any other event we tested.

On the whole, these scandals don’t seem to be pulling down Trump’s overall approval numbers. He has hovered around 50 percent after dropping a few points after the first executive order on immigration.  It’s also important to note that for about a 20 percent of voters, these scandals didn’t change their opinion either way.

So what does this mean? It’s possible that the scandals tamp down on support in the moment, but the outrage of the day isn’t yet driving public opinion of the president. And if anything, it’s making Trump’s base like him even more.

The national, online survey polled 1,927 registered voters from March 16-19. It has a margin of error of plus or minus 2 percentage points. Crosstabs are available here.