The 26 states suing over the Obama administration’s greenhouse gas-cutting Clean Power Plan may essentially get their wish, as President Donald Trump directed the Environmental Protection Agency to review the rule last week.

But the likely rollback of the plan might not make a big difference for these states, many of which were already on track to shift away from coal-fired electricity. Instead, opponents say they are more concerned about further emissions cuts  if the U.S. keeps the promises it made in the Paris climate agreement.

The Clean Power Plan set an ambitious goal of cutting 32 percent of greenhouse gas emissions between 2005 and 2030, primarily by shifting from coal to cleaner fuels like natural gas and renewable energy. But many states are retiring coal plants, regardless of the rule. In 17 of the 26 states suing, the median-aged coal-fired generator is at least 40 years old, according to data from the Energy Information Administration. None of the states have coal plants with a median age less than 30 years old.

By comparison, the median age of a coal-fired generator that retired in 2015 was 58 years old, according to the latest available EIA data. 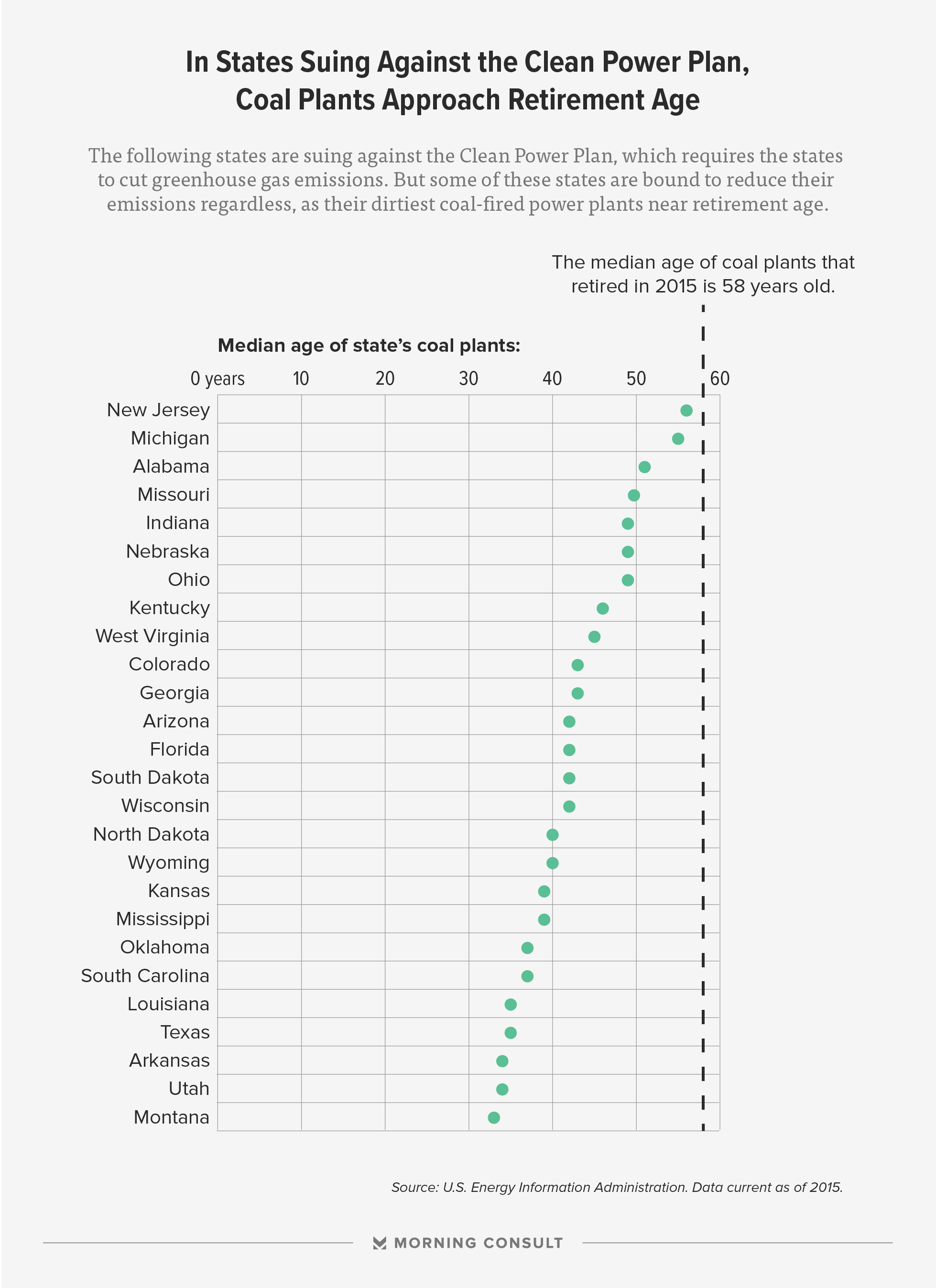 “There’s already been an enormous amount of activity in many of these states,” said Bruce Nilles, senior director for the Sierra Club’s Beyond Coal campaign, which advocates for coal-plant retirements. “They’ve begun to think through and lay out how to transition from high carbon to low carbon.”

Overall, carbon dioxide emissions from the electric power sector dropped 24.8 percent from 2005 to 2016, according to the EIA.

In Michigan, the median coal plant was about 53 years old by the end of 2015, according to the EIA. Thanks largely to the impending closure of more coal plants, Michigan would have surpassed its emissions-reductions targets under the Clean Power Plan and been able to sell credits to other states that fell short, according to a 2016 study by the Electric Power Research Institute. The state also increased its goal for renewable power generation last year from 10 percent to 15 percent by 2021.

Detroit-based utility DTE Energy said in a statement it does not anticipate changing its plans to retire three more coal plants by 2023, replacing them with natural gas and renewables.

New Jersey also has a clear path to reaching its goals. All three of the state’s coal-fired generators are slated to close this year.

Even in states with relatively new coal-fired power plants, recent investments in renewables have set some states on track to meet the plan’s targets. Texas’s median-aged coal plant is somewhat young, at 35 years old, but the state generated more than 13 times as much wind power in 2016 as it did in 2005, according to EIA.

Still, some states could have struggled to meet the goals. West Virginia, for example, may not have particularly young coal plants, but it also has few renewable resources and has not instituted a renewable portfolio standard.

And Montana could face a “double-digit increase in utility rates” due to the Clean Power Plan, Sen. Steve Daines (R-Mont.) warned at a press conference in March. The state’s median-aged coal plant is 33 years old, and Montana has less wind capacity than neighboring states.

The opposition to the Clean Power Plan isn’t just about the 2030 goals, Dan Byers, vice president for policy at the U.S. Chamber of Commerce’s Energy Institute, said in a phone interview. Coal-producing states, including Montana and West Virginia, could see job losses due to reduced demand for coal from their mines. And because the Clean Power Plan goals fall short of the U.S.’s promises under the Paris Agreement, opponents of the rule are concerned about further regulations in the long term, he said.

“There’s a simple math problem with Paris,” Byers said. “We would have had to walk away from it, move on to other sectors, or double the Clean Power Plan itself.”