Some Things Might Be Worth a Government Shutdown, Voters Say

Most voters think Congress should take all necessary steps to prevent a government shutdown at the end of the month, according to a new Morning Consult/POLITICO poll.

But when further prompted about hot-button policy riders, such as President Donald Trump’s proposed border wall or Planned Parenthood funding, which could threaten must-pass spending legislation on Capitol Hill, some voters were willing to budge.

Nearly two-thirds of voters (65 percent) said lawmakers should take all necessary steps to avoid a government shutdown, while just 17 percent said Congress should allow a temporary government shutdown if it helps them achieve their policy goals. Broadly, Republicans were more open to a shutdown — 22 percent of them said they would support it to achieve a policy outcome, while just 13 percent of Democrats shared that position.

Nearly four in 10 voters (38 percent) said the funding of a wall along the Mexican border would be important enough to prompt a government shutdown, though more than half of voters overall (54 percent) said it was not. A strong contingent of Republicans (53 percent) were on board with shutting down the government over wall spending, while 39 percent did not support the tactic. 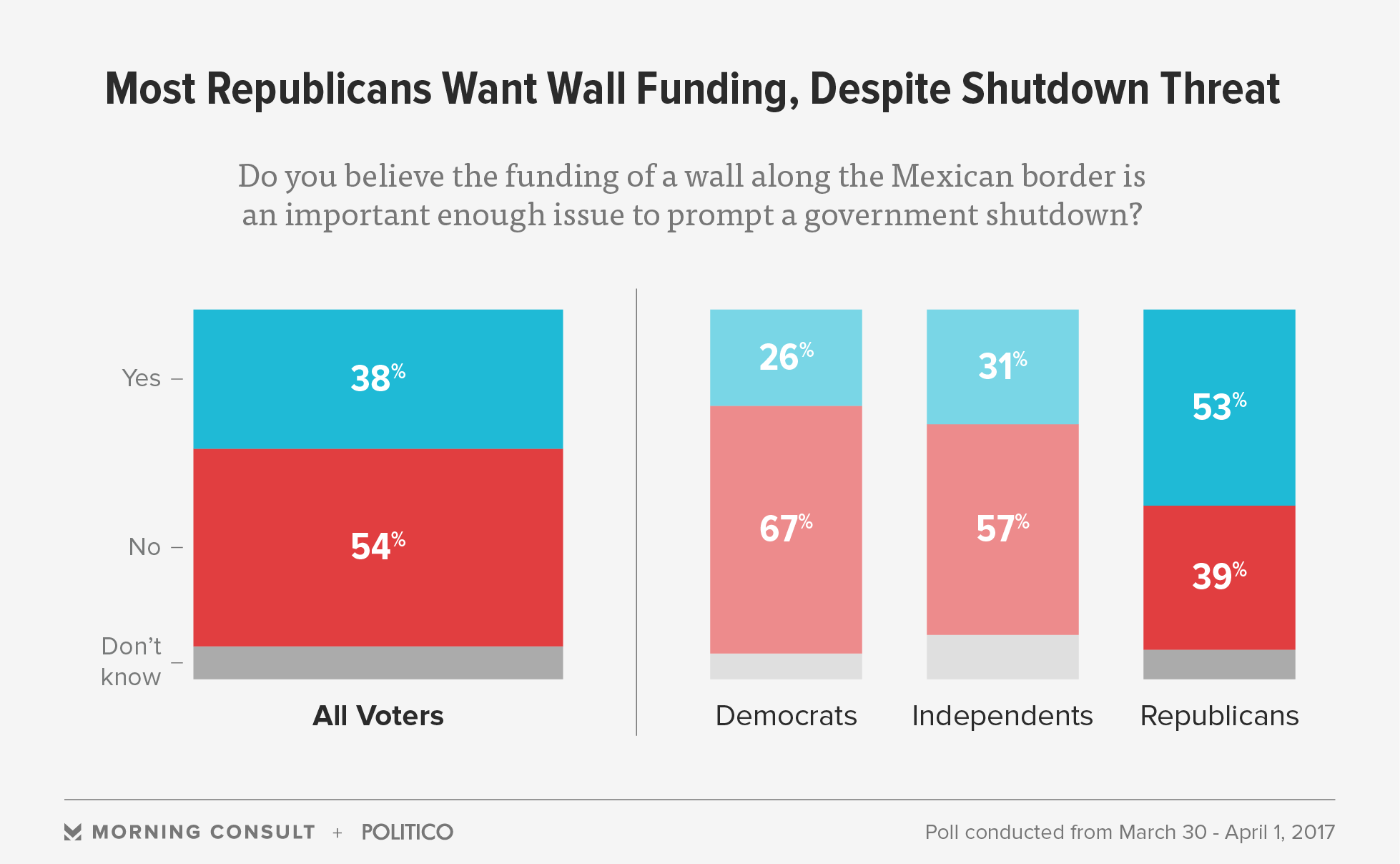 One main potential sticking point is Planned Parenthood. Outside conservative groups, as well as members of the House Freedom Caucus, have urged House leaders to use the must-pass measure to cut federal spending that covers health care at the organization’s clinics. House Speaker Paul Ryan (R-Wis.) has said he prefers using budget reconciliation to defund the women’s health provider.

On Capitol Hill, Ryan refused to offer details Tuesday when asked whether lawmakers would provide the Trump administration with requested funds for border wall construction or defense spending increases.

“I’m not going to get ahead of where the negotiators are. The appropriators are writing this bill and you’ll see it at the end of the month,” he said.

Ryan said that, unlike the past several years of spending fights over policy riders pushed by President Barack Obama, this time, “we don’t have to fight an administration that we disagree with on so many issues.”

Senate Majority Leader Mitch McConnell (R-Ky.) on Tuesday looked to quell any drama. He told reporters at the Capitol that bipartisan discussions are underway, and that he anticipates “being able to finish that in that last week before time runs out” on April 28.

The national, online survey polled 1,995 registered voters March 30-April 1. It has a margin of error of plus or minus 2 percentage points. See more here.