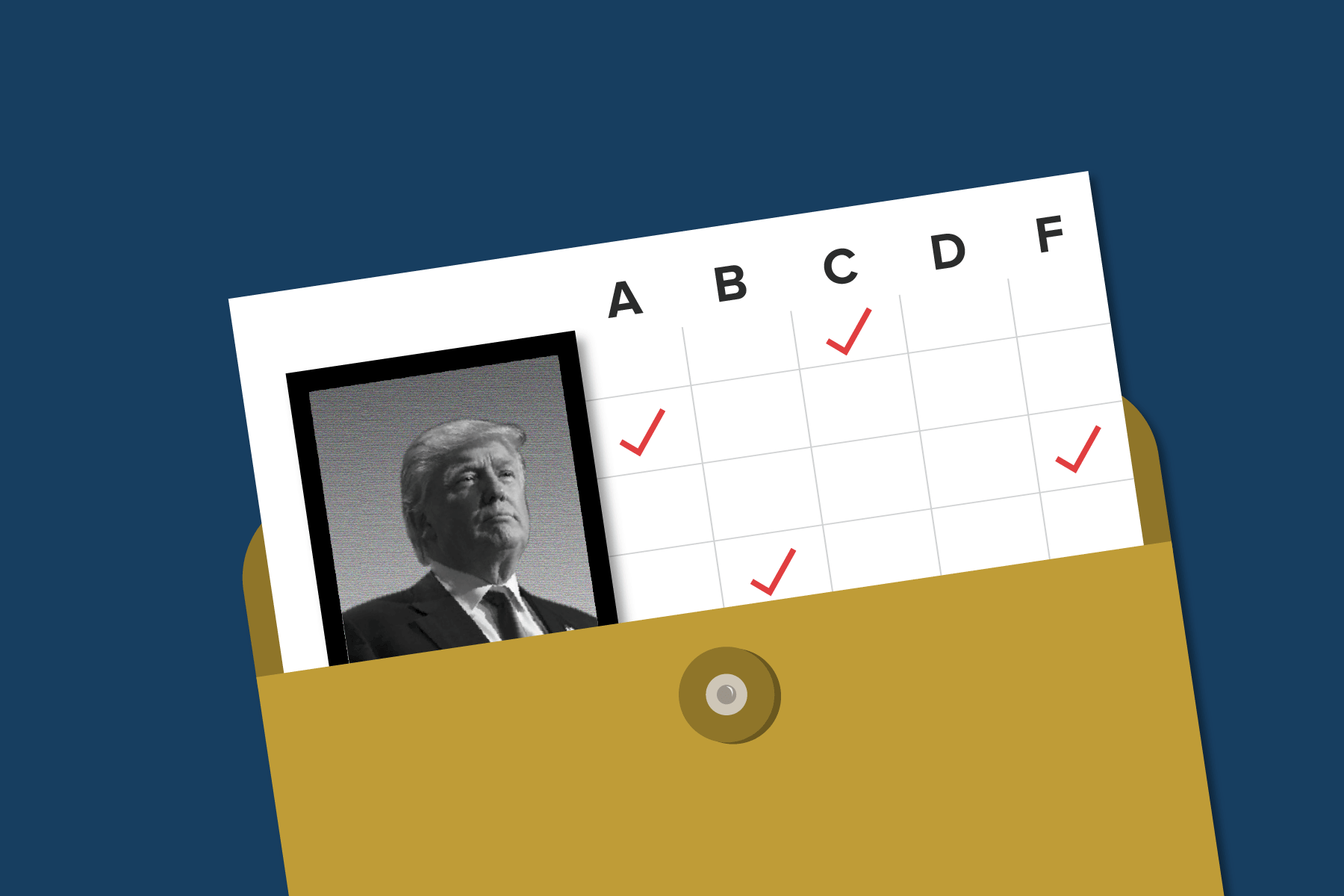 A quarter of Americans would give President Donald Trump an “F” for the job he has done during his first 100 days in office, according to a new Morning Consult/POLITICO poll.

The survey asked voters to assign letter grades — “A” through “F” — to Trump’s handling of a number of presidential responsibilities. While 24 percent of Americans gave him an “F,” another 23 percent gave him a “B,” a good grade on a scale ranging from excellent to failing.

As Trump nears 100 days in office — the 100th day falls on April 29, when government funding is set to expire — the first months of Republican-controlled government have featured a successful Supreme Court nomination and a flurry of activity to roll back regulations issued by the Obama administration. But Republicans also failed to clear their first big hurdle: repealing and replacing parts of former President Barack Obama’s signature 2010 health law, the Affordable Care Act.

Trump got his best marks when it came to fighting terrorism. More than a quarter of Americans (27 percent) gave Trump an “A,” his best grade in the poll. The sentiment is strongest among Republicans, 52 percent of whom gave him an “A,” while 34 percent of Democrats gave him an “F.”

The subject of health care was less kind to the president. After the public spectacle of the GOP’s failure on overhauling Obamacare, 32 percent of Americans gave Trump an “F” for his handling of that issue. Republicans were a bit more forgiving, but a plurality (29 percent) gave Trump a “C” on the issue.

Trump’s bad health care grade was only matched by how voters feel about his handling of climate change: Thirty-two percent of voters gave him an “F.” A similar share of voters (30 percent) also gave Trump a failing grade on immigration and 27 percent said he’s failing in his efforts to “drain the swamp.”

Despite voters being lukewarm overall on Trump’s handling of many issues, 44 percent of Americans said they expect his performance to improve over the rest of his term. Three in 10 voters said they expect it to get worse.

Almost half (48 percent) of voters currently approve of Trump’s job in office, while 45 percent disapprove, including one-third who strongly disapprove. In terms of the country’s trajectory, 47 percent of voters said the United States is headed in the right direction, and 53 percent said it’s on the wrong track.

The national, online survey polled 1,992 registered voters April 13-15 and has a margin of error of plus or minus 2 percentage points.