President Donald Trump’s tax plan, a general outline that diverges on specifics from the House Republican proposal, has made a positive impression on almost half of registered voters, according to new Morning Consult/POLITICO polling.

Forty-eight percent of respondents in a poll conducted April 27 through April 30 said Congress should use the White House’s principles as a starting point for tax overhaul legislation. That compares with 31 percent who said lawmakers should disregard Trump’s blueprint and start from scratch with their own bill. Twenty percent said they didn’t know or had no opinion.

Most of the provisions in Trump’s outline, which the White House introduced on April 26, received majority or plurality support from voters. The most popular aspect of Trump’s tax agenda, polling showed, is a proposed tax break for child care costs, which 67 percent of voters support and 15 percent oppose. 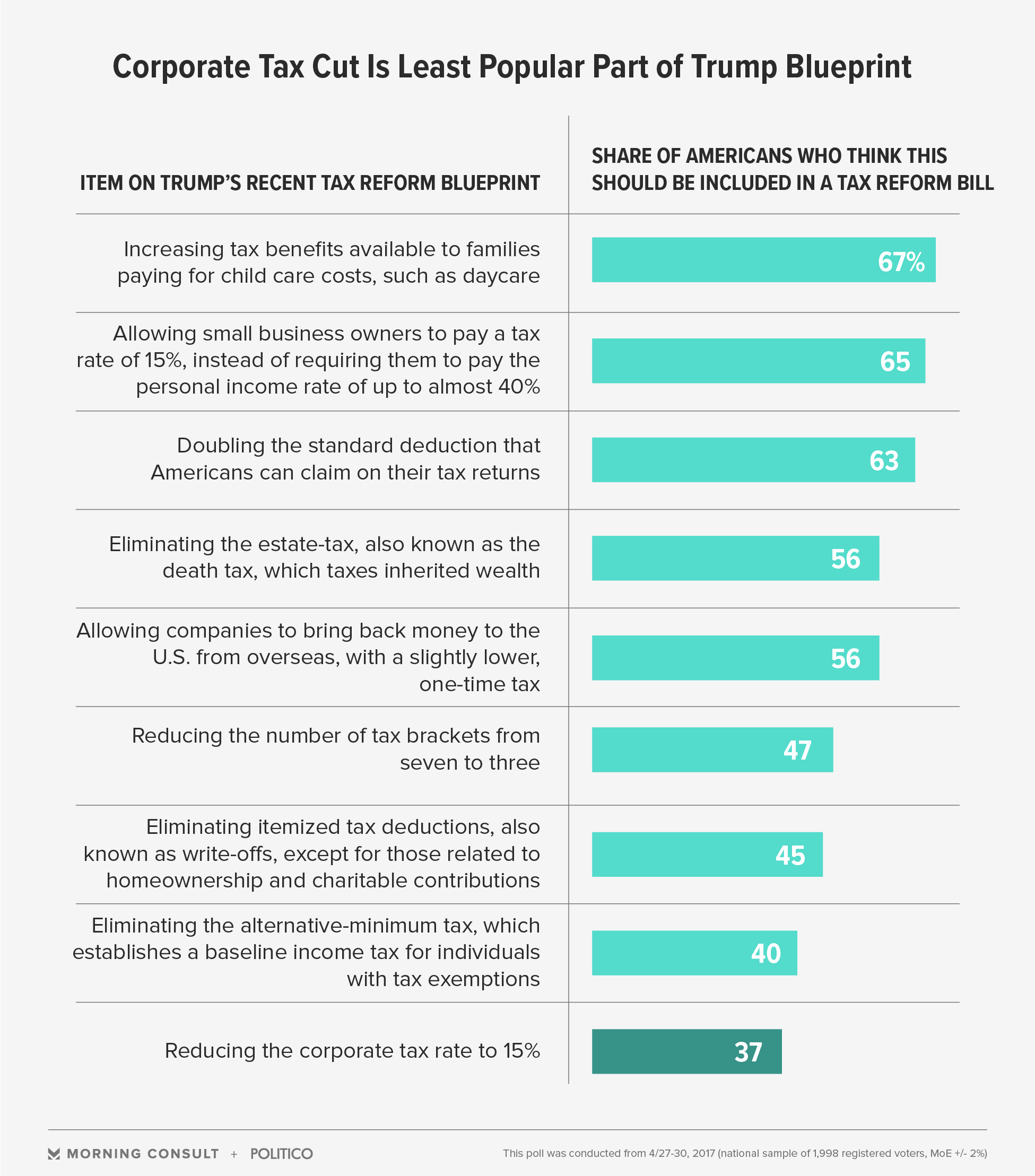 When asked about the corporate rate reduction to 15 percent included in Trump’s agenda, 37 percent of voters said lawmakers should include that provision in tax overhaul legislation, while 38 percent said it shouldn’t.

The White House plan would also apply that 15 percent business tax rate to “pass-through” entities — firms that are taxed through their owner’s individual returns rather than the corporate rate. That tax structure is commonly used by small businesses, but also by hedge funds and some large firms.

Those businesses currently pay individual rates of up to 39.6 percent. Sixty-five percent of voters support allowing small business owners to pay a 15 percent rate rather than current individual rates, compared to 15 percent who are opposed.

Trump’s plan also proposes a onetime tax on dollars brought back by U.S. businesses from overseas, a provision that 56 percent of voters support and 20 percent oppose.

Voters showed a range of support, from lukewarm to enthusiastic, for aspects of the administration’s plan aimed at simplifying the individual tax code. Sixty-three percent support the proposed doubling of the standard deduction, compared to 14 percent who oppose it.

Nearly half of voters are wary of a tax measure that would increase the federal deficit — a sticking point for fiscal hawks in Washington who are skeptical of the administration’s assertion that Trump’s plan would make up for large tax cuts through economic growth. Forty-six percent of voters said they would support tax legislation only if it did not increase the deficit, whereas 28 percent said they could accept a bill that increases it if the measure “achieved certain tax reform goals.”

The national poll consisted of 1,998 registered voters and has a margin of error of plus or minus 2 percentage points. See the full results here.