Commuters Care More About Cost When It Comes to Driving

The federal government is mulling an increase to the gas tax to cover infrastructure spending, which could further squeeze the paychecks of drivers already concerned about the cost of getting from point A to point B.

Seventy-eight percent of Americans say cost is an important factor they consider before driving a car somewhere — the highest level of concern among all forms of transportation, according to a Morning Consult survey conducted last week.

When weighing whether to bike or walk, 52 percent of those polled say cost is an important factor, as did exactly half of respondents about taking the subway or a bus.

Americans may not look fondly on the latest push for a gas tax to pay for fixing the nation’s aging roads and bridges, an idea Richard LeFrak, an infrastructure adviser to President Donald Trump, floated in an interview with CNBC Wednesday.

Of course, cost may matter most while driving because taking a car to work is the most common form of commuting: The federal census showed 76.4 percent of American drove alone in 2013, while another 9.4 percent carpooled.

The importance of cost for a particular mode of transportation also depends on location, income and sometimes age, likely reflecting people’s transportation preferences. 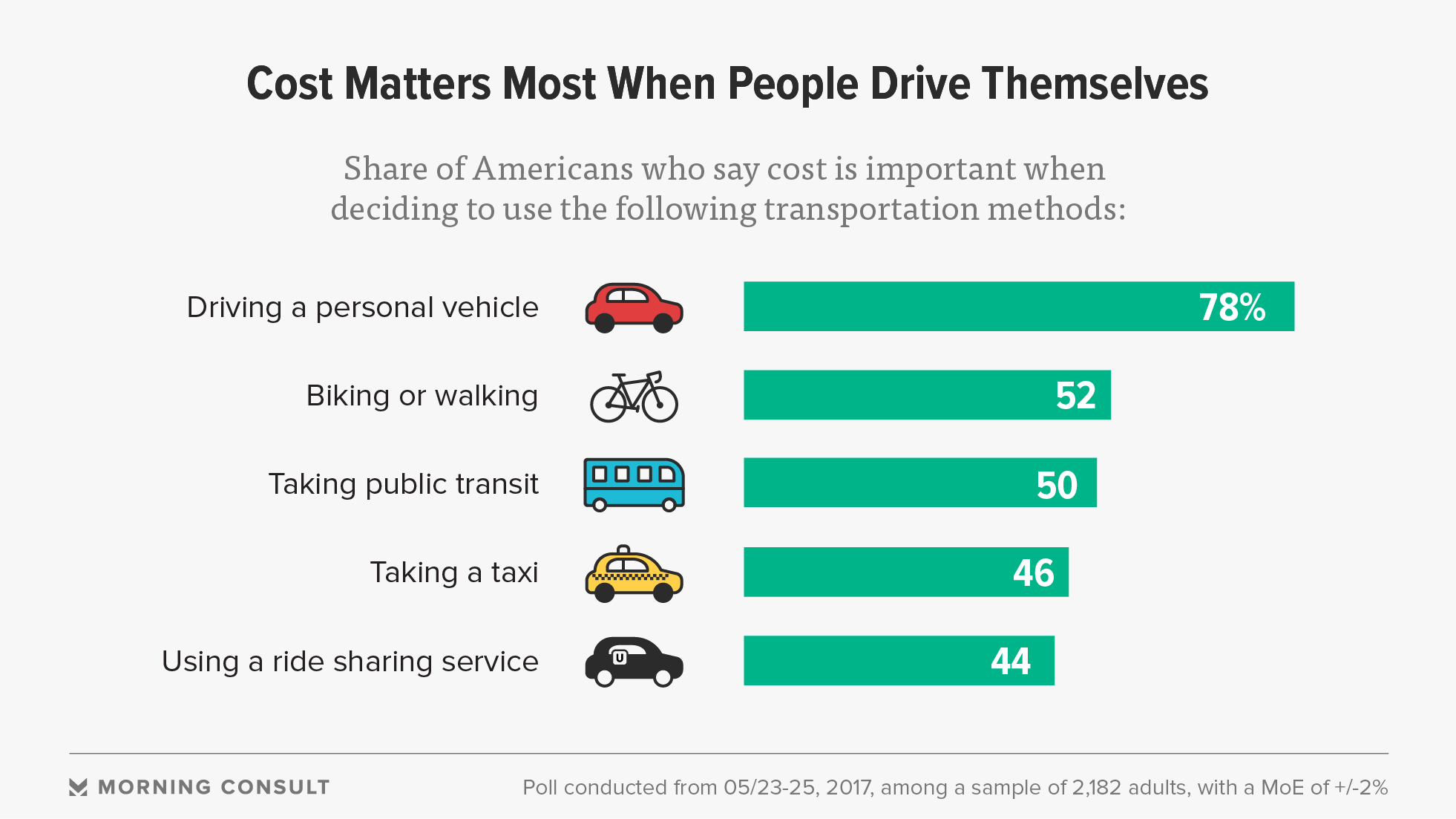 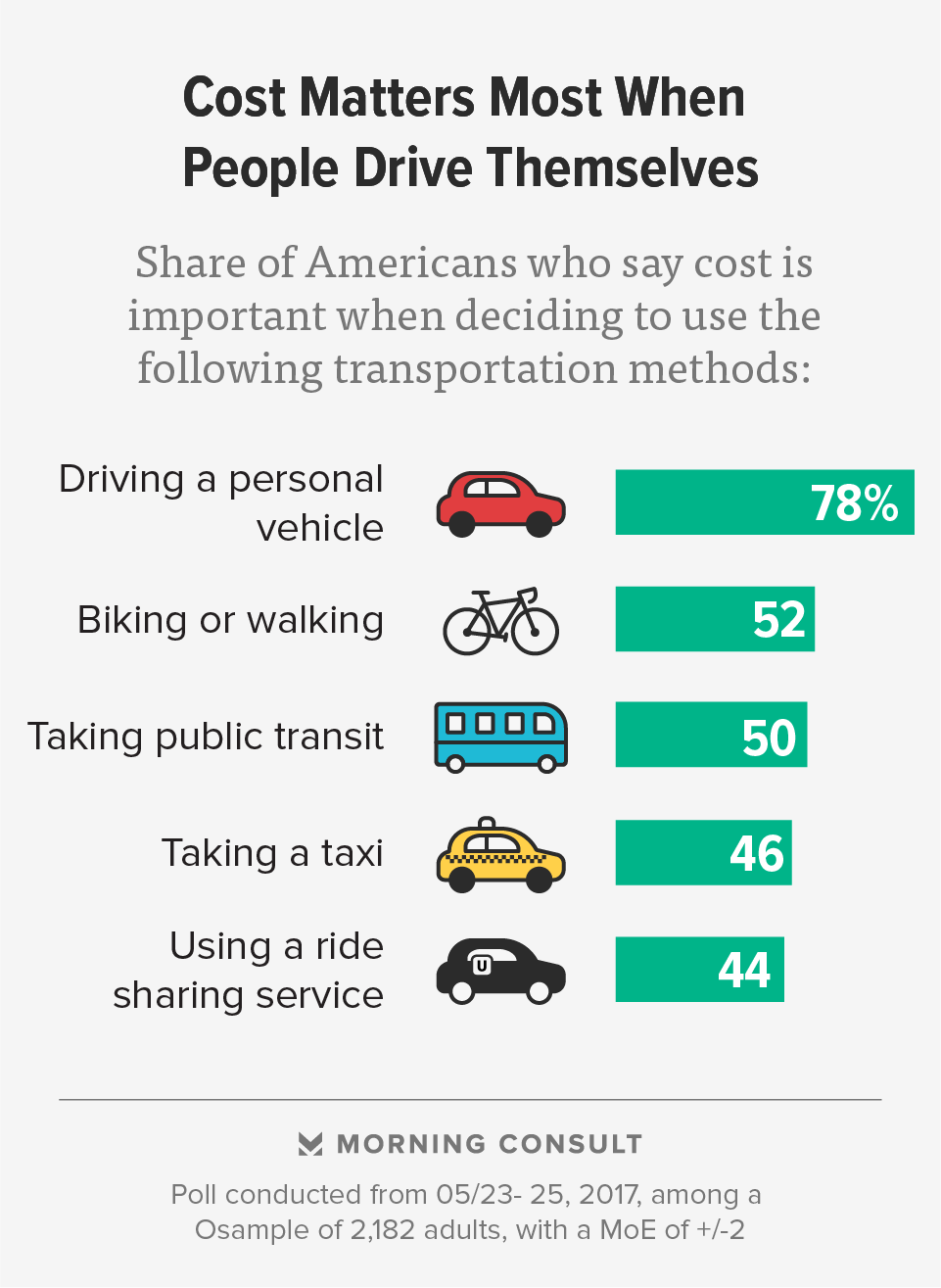 Cost matters to fewer than half of Americans when it comes to other forms of transportation: The price is an important factor when taking a taxi for 46 percent of respondents, and 44 percent factor in cost when using a ride-booking service such as Uber or Lyft.

But that could be because ride-booking also checks in as the least available service among Americans as a whole. Sixteen percent say ride-hailing services are not readily available to them — though that figure drops to 8 percent among millennials and rises to 24 percent for those 65 and older.

The availability of an Uber or Lyft likely factors into how much prices for those services matter: Fifty-eight percent of those aged 18-29 say cost is an important factor when deciding to use a ride-hailing service, compared to less than a third (29 percent) of Americans over the age of 65 who say the same.

But cost starts to diverge for varying incomes when it comes to other forms of transportation. More than half of people making less than $50,000 per year — 54 percent — said cost matters when choosing to take the subway or bus. But for those making $50,000 or more a year, or more than $100,000 a year, public transportation costs matter to 48 percent and 43 percent, respectively.

The polling also shows that access to public transportation varies depending upon where respondents live. Sixty-three percent of people in urban areas cite cost as important when contemplating taking the subway or bus, but for people in rural communities, that figure drops to 42 percent — perhaps because 31 percent of rural residents say they don’t have access to public transit.

Morning Consult’s survey did not ask respondents to specify why they factor in cost when choosing their mode of transportation.

Polling was done among 2,182 adults between May 23 and 25 and has a margin of error of plus or minus 2 percentage points. See full results here.