Congressional Republicans Are Losing Voters’ Trust on Many Issues

Congressional Republicans have stumbled somewhat coming out of the gate in 2017, and Morning Consult polling indicates the American people are starting to lose faith in their ability to govern.

Weekly tracking surveys from early March into late May show that registered voters are moving away from Republicans — and toward Democrats — on a number of policy issues. 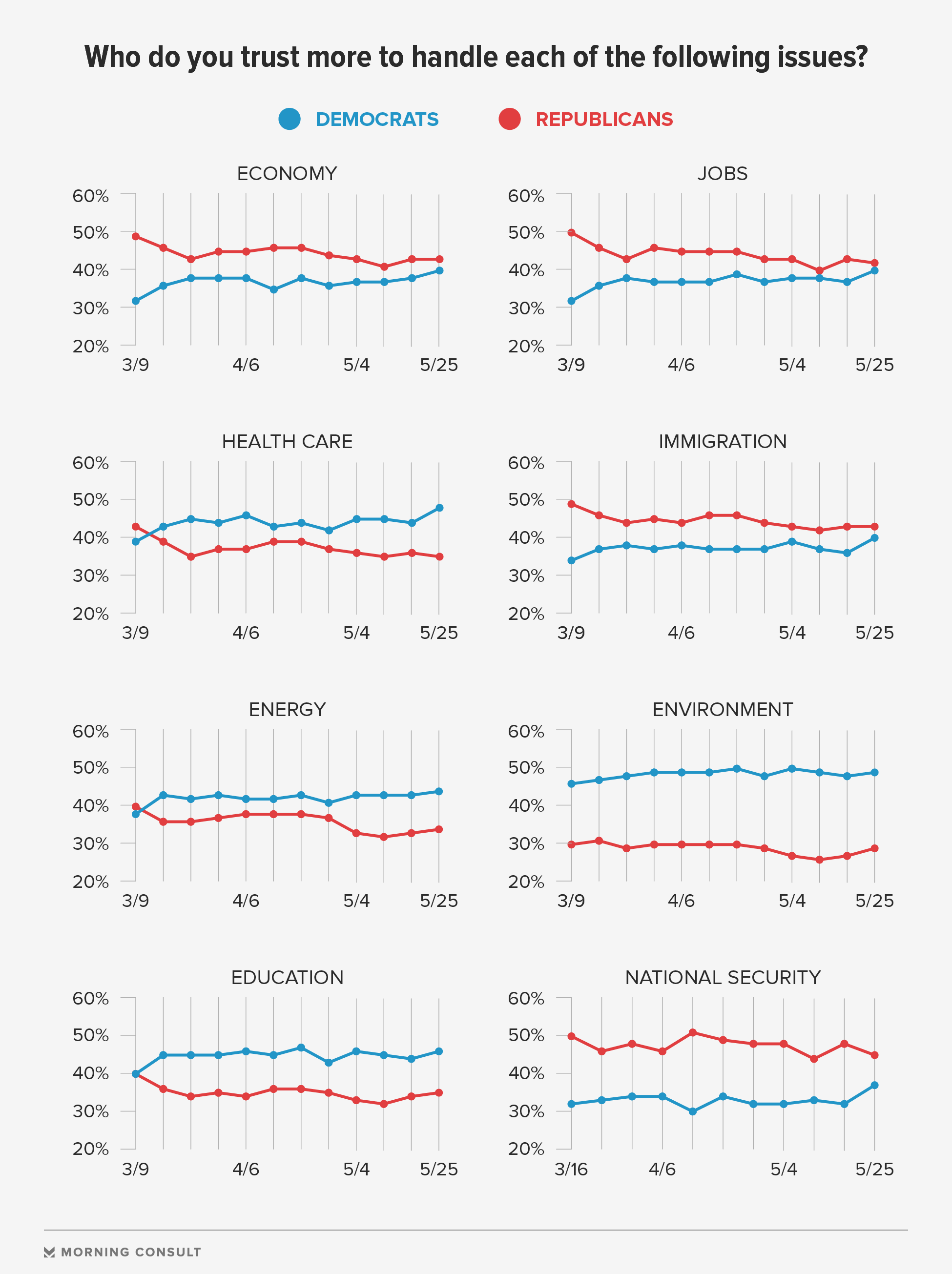 The biggest swings came on two subjects that are consistently among the highest priorities for Americans when it comes to how they decide to cast their vote for candidates running for office: health care and the economy.

When Morning Consult began tracking voter trust on the issue of health care, Republicans held a 4-point edge, 43 percent to 39 percent, over Democrats. But as the majority party in Congress has moved through the process of trying to repeal and replace significant parts of the Affordable Care Act, former President Barack Obama’s signature 2010 health law, Americans have flocked toward Democrats. In the most recent survey, Obama’s party boasted a significant edge, with almost half (48 percent) of registered voters backing Democrats on the issue, compared with 35 percent who still trusted the GOP.

It’s a similar picture on economic issues. In early March, half of registered voters said they trusted Republicans on the issue of job creation, compared with 32 percent who opted for Democrats — and roughly the same share (49 percent) gave Republicans the advantage on the economy overall, while 32 percent went for Democrats. Fast-forward to Memorial Day weekend, and the upper hand for the GOP is right around the surveys’ 2-point margins of error: Forty-three percent back Republicans on the economy and 42 percent back the GOP on jobs, compared with 40 percent who opted for Democrats on both subjects.

There were also smaller shifts toward Democrats on other hot-button issues, including national security and immigration. Forty-five percent of voters backed Republicans on national security in late May, down 5 points from mid-March, while the share of voters backing Democrats rose from 32 percent to 37 percent. And on immigration, one of President Donald Trump’s top issues during the 2016 presidential campaign, Republicans have also lost ground, dropping from 49 percent to 43 percent. Democrats, meanwhile, have gained some traction, with the share rising from 34 percent to 40 percent.

Morning Consult also tracked voters’ trust on energy, the environment and education, with Republicans losing ground on those subjects to Democrats by 12-, 4- and 11-point margins, respectively.

Speaker Paul Ryan (R-Wis.) has said on more than one occasion that his party is in a process of transitioning from an opposition party to one that is comfortable with governing, and the data underscores that those growing pains could bring potential electoral pitfalls — particularly in the House. Going back to 1938, the president’s party has lost more House seats than it’s won in 18 of the past 20 midterm elections.

The majority of movement for sentiment on these policy areas has been driven by independents and some Democrats, who seemed willing to give Republicans a chance earlier this year but have since grown more pessimistic. In the most recent Morning Consult survey,  53 percent of registered voters said they view congressional Republicans unfavorably.

For one GOP strategist, the decline in support is less a reflection of congressional Republicans’ body of work to date, and more about the ongoing controversy in the White House.

“The daily self-created ‘crisis du jour’ we see emanating from the White House make legislative action on any issue harder to accomplish. That inevitably erodes some of the confidence voters will have in congressional Republicans to follow through on their promises,” Doug Heye, a former top aide to the Republican National Committee and to former House Majority Leader Eric Cantor (R-Va.), said via email. “It also means that, as more and more voters turn away from Trump, those headwinds — both legislatively and politically — become stronger.”

While the numbers show those political headwinds are real, it also doesn’t yet appear to be a full-blown disaster for the ruling party of Congress. Over Memorial Day weekend, Democrats held a 4-point edge over Republicans, 43 percent to 39 percent, on the generic ballot if the midterm elections were held today. That figure would likely translate to net losses for the GOP, but would not precipitate the type of wave Democrats need to regain control of one or both chambers of Congress.