Opposition to AHCA Has Doubled Among GOP Voters Since April

Opposition to the House-passed health care bill has nearly doubled among Republican voters since the end of April, according to Morning Consult polling.

In a new Morning Consult/POLITICO survey, 3 out of 10 Republican voters said they disapprove of the House GOP’s bill to repeal and replace the Affordable Care Act. By contrast, 16 percent of GOP voters said they disapproved of the legislation just days before it passed the House on May 4, according to a Morning Consult poll conducted April 27-30. Support for the House bill has also declined among Republicans, from 67 percent in April to 56 percent in June.

Mounting disapproval of the health care bill among Republicans reflects the growing trend within the entire electorate. In the new poll, half of all voters said they oppose the House-passed Obamacare repeal bill, up from 37 percent at the end of April. At the same time, the bill’s approval has dipped from 42 percent in April to 35 percent this month.

House Republicans have also lost the backing of most independent voters, who were split on the bill in April with 36 percent supporting it and the same percentage opposing it. Now, only 26 percent of independents support the House GOP bill, while 53 percent oppose it. 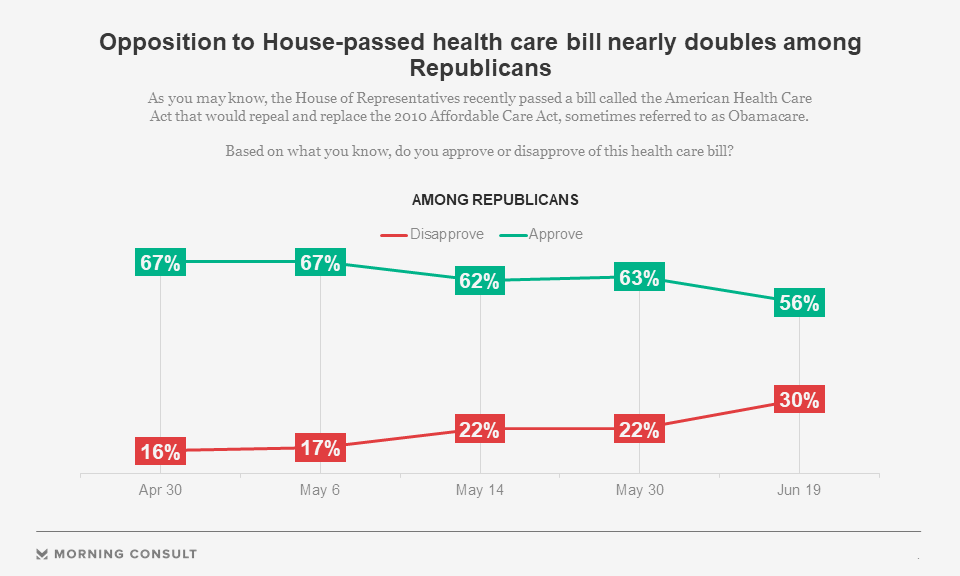 Eroding support for the House bill comes as Senate Republicans endeavor to pass their own version of the bill before the end of June. The most recent poll shows 4 out of 10 voters want the Senate to make major changes to the House bill or start over from scratch, while only 9 percent of voters said the chamber should pass the House version without making any modifications. (Another 19 percent believe the Senate should pass the bill with minor changes.)

The text of the Senate bill has yet to be released. But if the Senate bill diverges from the House version in major ways, House conservatives are already warning it could imperil the overall GOP effort to repeal and replace Obamacare.

The conservative Republican Study Committee, one of the largest congressional caucuses, plans to warn Senate Majority Leader Mitch McConnell (R-Ky.) that not including four major policies in the Senate version “may jeopardize final passage in the House of Representatives,” according to a draft letter that was obtained by Morning Consult but has yet to be sent. The existence of the letter was first reported by the Independent Journal Review.

While Republicans struggle to reach consensus on repealing Obamacare, more voters grow distrustful of the party’s handling of health care issues. Forty-seven percent of voters said they trust Democrats more than Republicans on health care issues, while a third of voters said they trust the GOP more. In April, the split on trust favored Democrats by just 5 percentage points, 42 percent to 37 percent.

As they intensify their fight against the Senate GOP effort to repeal Obamacare, Democrats find themselves the most trusted party on health care issues. While Democrats lack the votes in the Senate to stop the GOP health care bill on their own, the shift in public opinion could make it harder for their Republican counterparts to unite on their overhaul in the nine remaining legislative days before the July 4 recess.

The new poll was conducted June 15-19 and consists of a national sample of 2,051 registered voters. The online survey has a margin of error of plus or minus 2 percentage points. See the full results here.