President Donald Trump this week questioned the impartiality of several attorneys hired by special counsel Robert Mueller to investigate whether Trump campaign associates colluded with the Russian government leading up to the 2016 U.S. presidential election.

“I can say that the people that have been hired are all Hillary Clinton supporters, some of them worked for Hillary Clinton,” Trump said in a Fox News interview that was taped on Thursday and broadcast Friday. “I mean, the whole thing is ridiculous if you want to know the truth.”

A new Morning Consult/POLITICO survey shows that while a plurality of registered voters (45 percent) say they believe Mueller will treat Trump fairly in conducting the probe, a plurality of Republicans (49 percent) disagree that he will. 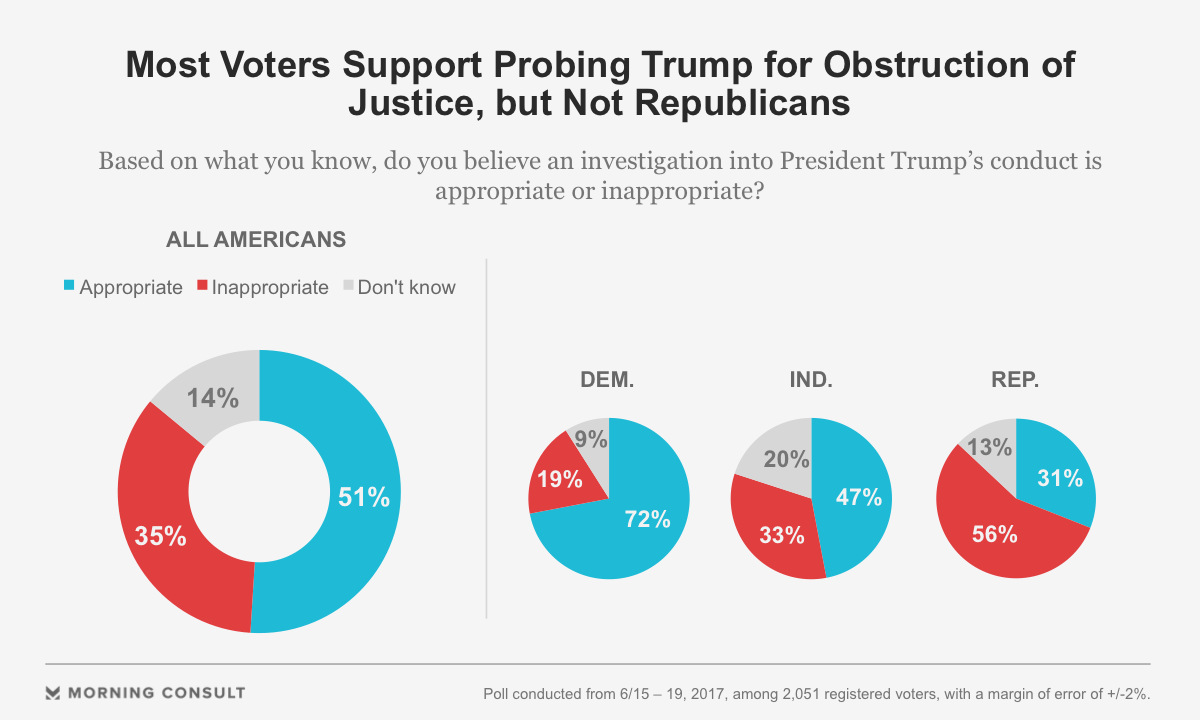 Three of the five attorneys Mueller has hired to work on his investigative team have made political donations almost exclusively to Democrats, CNN reported on June 13, citing Federal Election Commission records.

Fifty-six percent of Republican voters said the investigation is inappropriate. That assessment is at odds with registered voters overall — 51 percent said it was appropriate for investigators to probe Trump’s conduct.

Trump said on June 16 that he is under investigation for firing now-former Federal Bureau of Investigation Director James Comey, suggesting the probe has broadened to include allegations that the president obstructed justice when he dismissed Comey on May 9.

While GOP voters were critical of investigating Trump’s conduct, they were more supportive of the appointment of a special counsel — 42 percent agreed with the appointment, while 44 percent disagreed. Twenty-four percent of Republicans were strongly opposed to the appointment of Mueller, who served as FBI director under President George W. Bush and President Barack Obama.

During the Fox News interview — Trump’s first TV interview in more than a month — the president reiterated that he felt vindicated by Comey’s testimony before the Senate Intelligence Committee on June 8.

Comey’s testimony did little to change voters’ mind about the circumstances of his dismissal, according to a Morning Consult survey conducted June 8 through June 12, when 57 percent of GOP voters said they thought Comey’s public comments cleared the president of any wrongdoing.

The focus on leaks, which Trump and his allies have decried throughout his presidency, also resonated deeply with Republican voters. Seventy-three percent said it was inappropriate for Comey to leak his memos to a friend who later sent them to The New York Times.

During the Senate Intelligence Committee hearing, Comey said he did so in order to kickstart the appointment of a special counsel to oversee the Russia probe. Fourteen percent of Republican voters said they thought it was necessary for Comey to leak the memos to ensure Mueller’s appointment.