Democrats Punch Up Against Corporations With ‘Better Deal’ Agenda 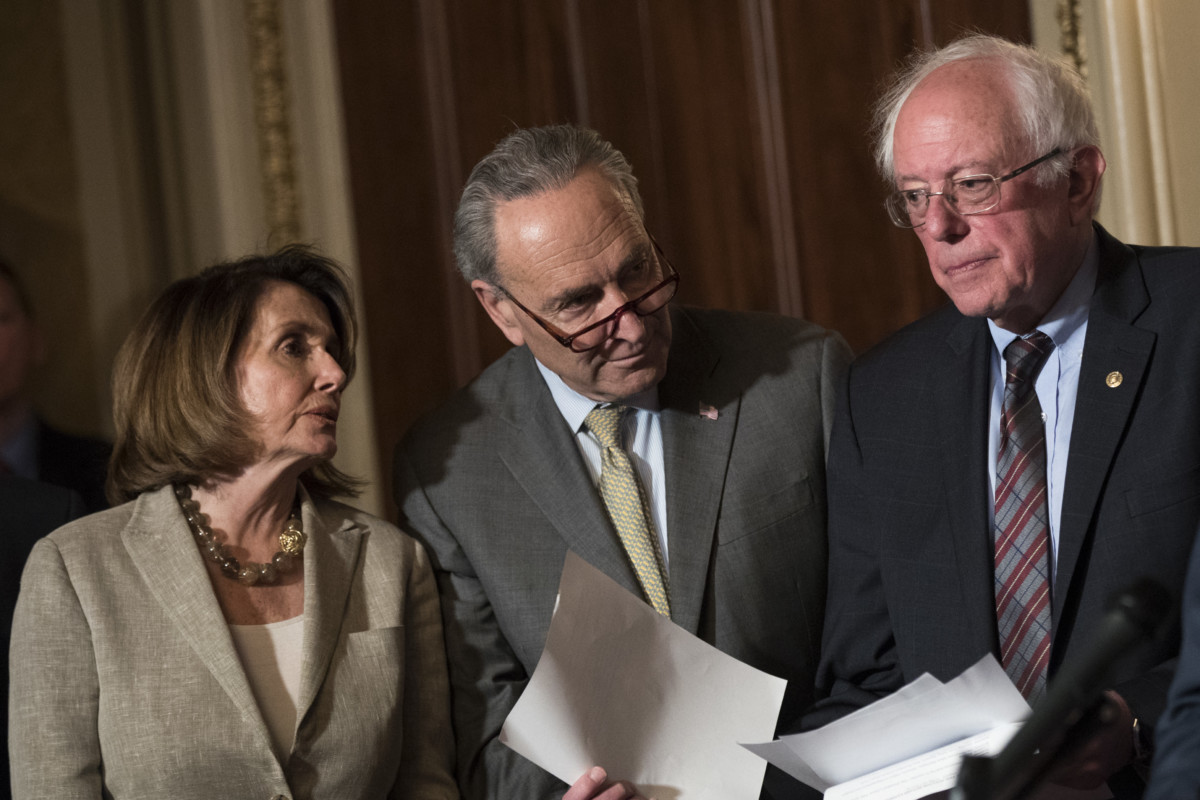 Sanders, right, wasn't at the Monday rollout but his impact on messaging was evident. (Drew Angerer/Getty Images)
By Cameron Easley

Congressional Democrats on Monday launched their messaging campaign ahead of the 2018 midterm elections, announcing their intent to co-opt President Donald Trump’s populist pitch and prove that they are the party working to keep corporate interests from encroaching on the lives of everyday Americans.

“President Trump campaigned on a populist platform,” but has not delivered on that platform, Senate Minority Leader Chuck Schumer (D-N.Y.) said at the news conference in Berryville, Va., standing in front of a Main Street-esque row of buildings and residences.

“American families deserve a better deal, so this country works for everyone, not just elites and special interests,” he said, framing the party’s “Better Deal” agenda, arguing that “corporate interests” and “the super wealthy” use campaign and lobbying influence to “protect their special deals.”

As Democrats look to appeal to voters of all partisan stripes, Morning Consult polling shows corporate resentment is a popular topic to broach.

And a February survey found that majorities of Democrats (69 percent), independents (70 percent) and Republicans (53 percent) said they felt their voices on political and policy issues weren’t heard in Washington, D.C., while 50 percent of those voters also said their members of Congress spent too much time fundraising.

“Corporate influence on our government has gotten worse under the Trump administration,” House Minority Leader Nancy Pelosi (D-Calif.) said at the news conference, vowing to turn up the pressure on big business through antitrust regulation. “Government has slacked off enforcement of those [antitrust] laws,” she said, leaving “bigger and bigger corporations with more and more power.”

The rhetoric against corporate power evoked the fire-and-brimstone messaging from Trump and Sen. Bernie Sanders (I-Vt.) during the 2016 campaign, signaling a shift to a more economic message — even as Schumer sought to soften the image of friction between Sanders’ supporters and the establishment wing of the party.

Schumer downplayed lingering divides between Sanders supporters — who want to take the party leftward to win more appeal from the blue-collar workers in the heartland who opted for Trump in 2016 — and the Obama coalition, which was successful in the 2008 and 2012 presidential elections. The senator called the split “a false choice.”

“Democrats will show the country, we are the party on the side of the working people,” he said, rolling out his party’s opening volley of policy prescriptions to help the middle class: pushing for rules to stop price gouging on drugs and allowing Medicare to negotiate directly with pharmaceutical companies; providing tax credits to small businesses to train workers and provide employment to Americans across the country, particularly in smaller cities and rural areas; and fighting to allow regulators to break up big companies if they’re hurting consumers and making it harder for them to merge if they’re not increasing competition.

“We know that we’re in the minority,” Schumer said, but “we have to start presenting our vision for the country’s future” to “start rallying the American people to support our ideas.”

As Democrats look to refine their pitch to Americans ahead of 2018 efforts to retake control of Congress, history shows their best chances are likely to come in the House, where incumbents from the president’s party typically face a tough slog. In 18 of the past 20 midterm elections, the president’s party has lost more House seats than it’s won, losing an average of 33 seats in those years.

National Republican Congressional Committee spokesman Jesse Hunt signaled the GOP’s plans to return to the playbook which has served them so well over the past eight years: using Pelosi as a punching bag to energize the base and turn off independents.

“Nancy Pelosi as the face of this plan is good for House Republicans,” Hunt said in a statement by email, calling Pelosi “an albatross around the neck of each losing Democratic candidate in the four House special elections” so far this year.

While Pelosi is unpopular, House Democrats hope that the election will not be a referendum on her, but on the president, who was 7 points underwater (44 percent approve vs. 51 percent disapprove) in the same survey. Voter enthusiasm and turnout are key in midterm elections — and the energy appears to be on the side of the minority party: Seventy-three percent of voters who opted for Clinton in 2016 strongly disapprove of Trump, compared with 50 percent of the president’s voters who say they are still strongly in his corner.

Also working in Democrats’ favor is a declining faith in Republicans’ ability to govern. As the 115th Congress has rolled on, registered voters have grown more likely to trust Democrats over Republicans in a number of policy areas, according to a Morning Consult analysis.