A plurality of Republicans say President Donald Trump received more of the popular vote in 2016 than his Democratic rival, former Secretary of State Hillary Clinton.

According to a new Morning Consult/POLITICO poll, 47 percent of Republican voters said Trump outpaced Clinton — despite her nearly 2.9 million-vote advantage after all the states certified their election results. 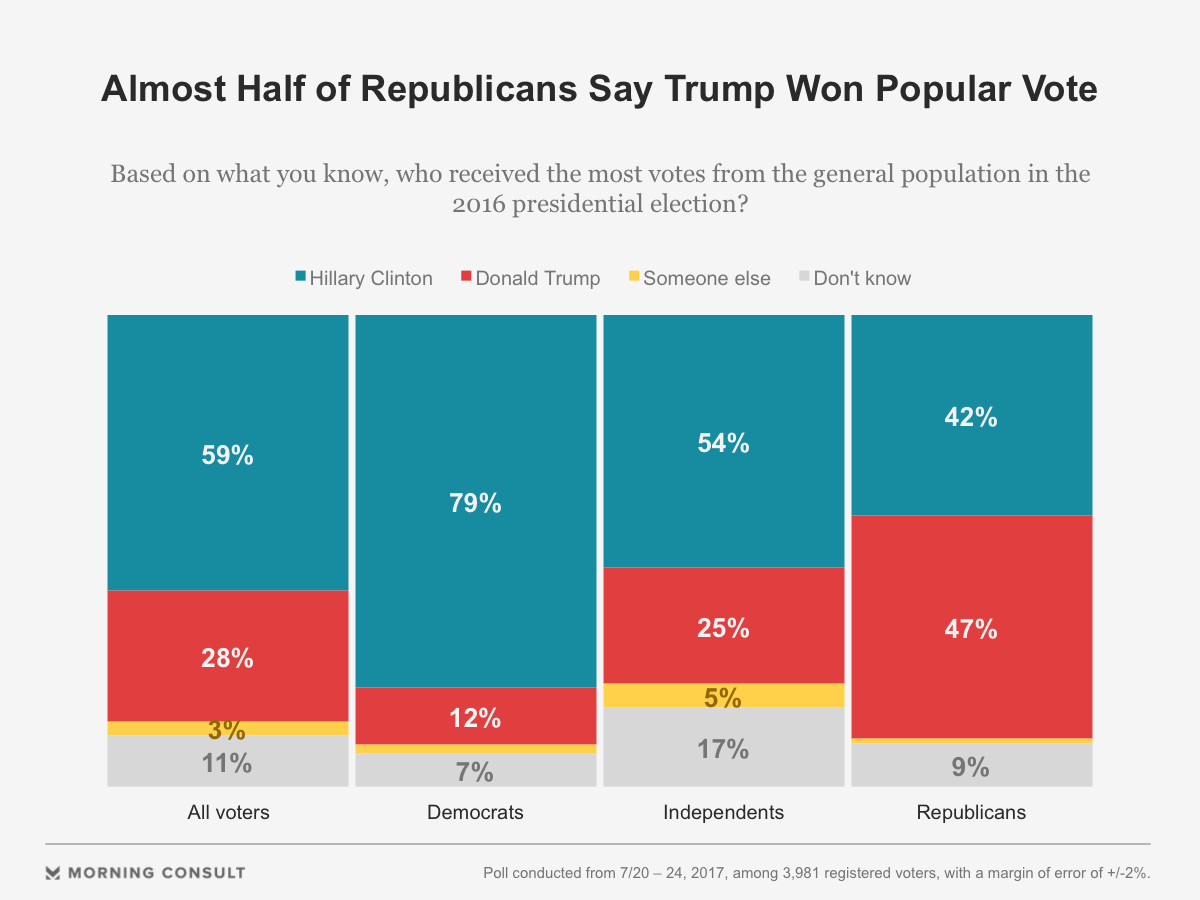 Those kind of assertions are no accident, said Jennifer Lawless, a professor of government at American University and director of the school’s Women & Politics Institute.

“Trump voters have been told since the day of the election that Trump won the popular vote, by the campaign, the surrogates, and Trump himself,” Lawless wrote in a Tuesday email. “And this has been a message that the White House continues to communicate.”

Beyond the White House and Trump’s associates, Lawless said there is another culprit: “Because Trump has made consistent allegations of voter fraud, his claims about winning the popular vote continue to get covered.”

Allan Lichtman, a history professor at American University, said in an email Tuesday that Trump has “perfected the technique of the Big Lie” — which, as Lichtman wrote in an op-ed last fall, is to “repeat a lie loudly, over and over until people come to believe it.”

“These results show that again that like ‘Birtherism,’ which launched Trump’s political career, the Big Lie continues to work, at least among those who want to believe it,” noted Lichtman, a professor who won professional acclaim last year after correctly predicting Trump’s victory.

Another 42 percent of Republican voters answered that Trump did in fact lose the vote among the general public, despite his victory in the Electoral College.

Nearly half of people who said they voted for Trump (49 percent) said he won the popular vote. Four in 10 Trump voters said Clinton won that tally.

Another part of it, said Jeremy Mayer, an associate professor at the Schar School of Policy and Government at George Mason University, is “nonpartisan confusion about how the Electoral College works.”

“They are aware of it the way we all are vaguely aware we have appendixes in our stomachs,” he said in an email Tuesday. “We only notice our appendixes when they explode and we need surgery. Same with the Electoral College. Americans don’t pay attention to it, except for those rare moments when it elects someone who didn’t win the popular vote. The attention is fleeting.”

The national, online poll of 3,981 registered voters was conducted July 20-24 and has a margin of error of plus or minus 2 percentage points. See the full results here.

Correction: A previous version of this story misstated the name of the Presidential Advisory Commission on Election Integrity.