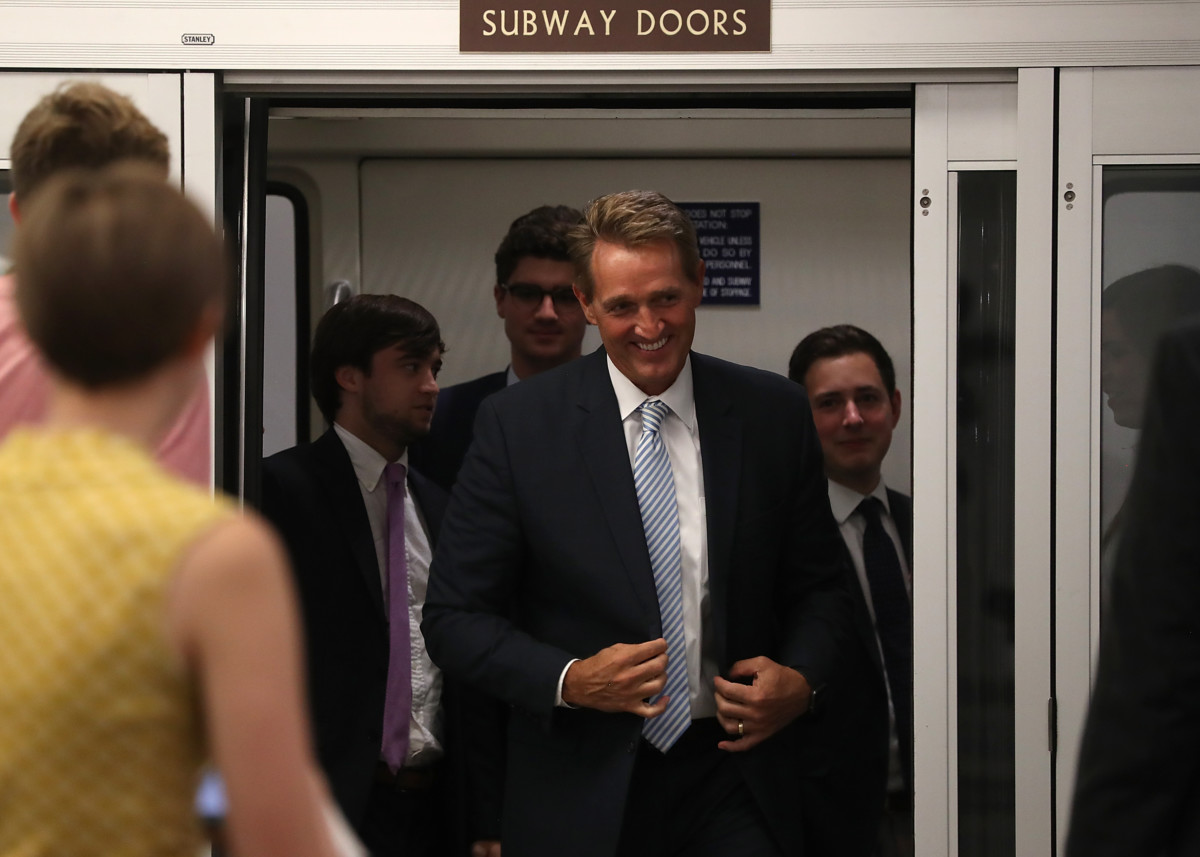 Flake is in a tough spot heading into 2018. (Justin Sullivan/Getty Images)
By Eli Yokley & Cameron Easley

Sen. Jeff Flake has literally written the book on rejecting the style of politics deployed by Donald Trump. And in his home state of Arizona that pits the vulnerable Republican against a good chunk of primary voters who approve of the president as he faces re-election next year.

Flake’s net approval rating is 6 points underwater, according to the new Morning Consult Senate Approval Rankings, with 36 percent of Arizonans approving of his job performance and 42 percent disapproving.

Flake’s support among the GOP base is weak compared with most of his colleagues in the Senate Republican Conference, as well as Trump, who is extremely popular among Arizona Republicans. One GOP strategist in Arizona, speaking anonymously to discuss strategy, said Trump’s influence on the race “could be devastating” to Flake if he were to make a play against him. 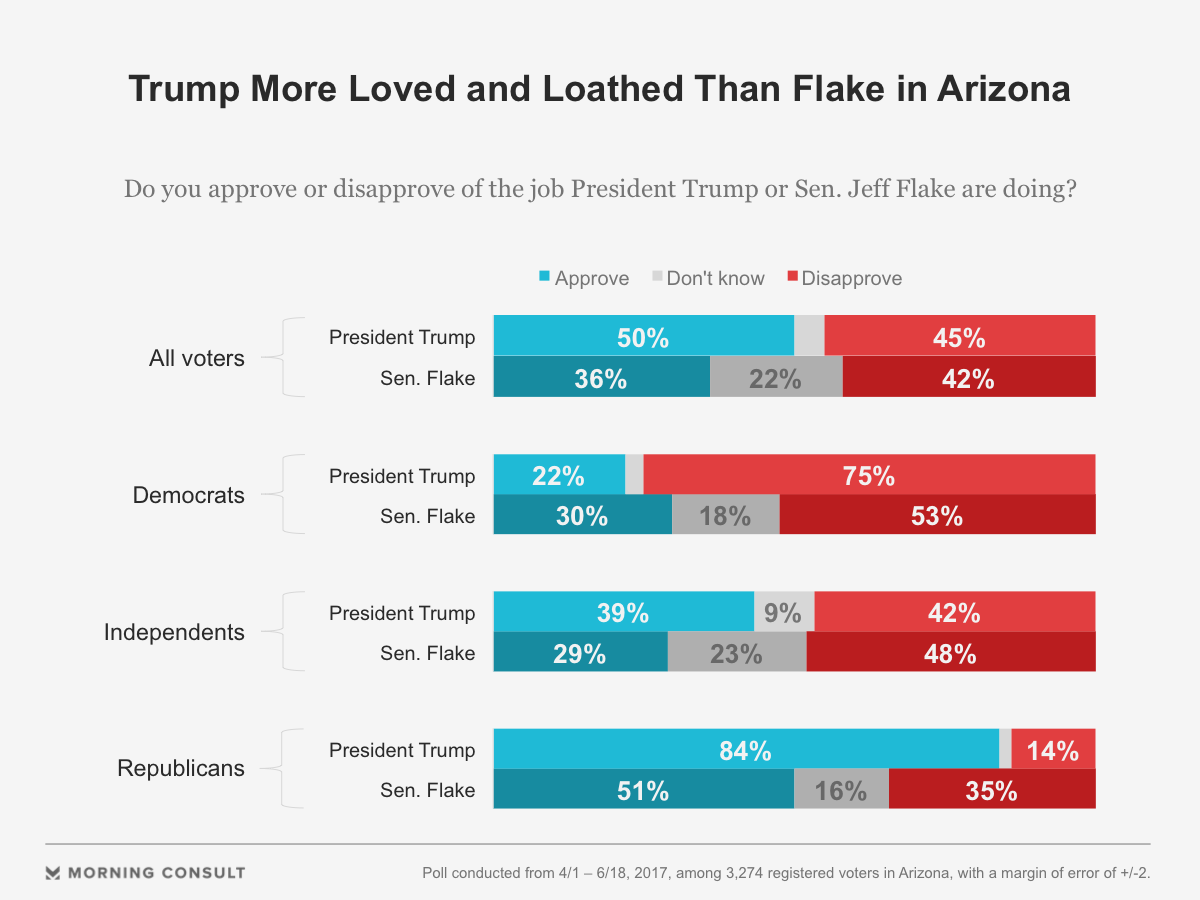 Flake has been frequently critical of the president and refused to endorse him during the 2016 campaign. In July, he’s jabbed Trump repeatedly in media appearances promoting his new book out Tuesday, “Conscience of a Conservative: A Rejection of Destructive Politics and a Return to Principle.”

Flake already has one primary challenger, former state Sen. Kelli Ward, who launched her campaign in October. Ward ran against Sen. John McCain (R-Ariz.) in 2016, losing 51.1 percent to 39.9 percent last August. On Monday, Ward told Morning Consult she views Flake as “very vulnerable,” and said her polling shows her with a lead over the first-term senator.

But Ward may not be alone in pulling for serious support from the right, this time around. Two others are also said to be considering campaigns, according to three GOP operatives in the Grand Canyon State, who also said the White House is considering throwing its weight behind a Flake challenger.

Robert Graham, a Trump supporter and former chairman of the Arizona Republican Party, is said to be considering a campaign. Graham, who led the state party for two terms, came under fire last year when some on the state committee unsuccessfully attempted to pass separate resolutions censuring him and McCain. Conservative activists had accused Graham of attempting to meddle in their efforts, according to an Arizona Republic account of a January 2016 meeting.

But when Trump was under fire last October after a vulgar video leaked and McCain and other Republicans pulled their support, Graham took a subtle jab at McCain, describing Trump as “not a 30-year, career politician” in a local news interview.

During an interview with The New York Times, Graham said the White House is eyeing the race, along with Sen. Dean Heller’s in Nevada. Both Western state Republican senators have at times made Trump’s push for a health care overhaul more difficult. Along with Graham, Jeff DeWit, the state treasurer and tea party-style Republican who was a big Trump supporter, is also considering a campaign.

The survey data shows a few warning signs for Flake, and suggests the right candidate could ride Trump’s coattails to success in a primary.

Ryan O’Daniel, who managed McCain’s successful 2016 re-election campaign, cautioned overplaying early numbers. Flake’s re-election campaign, from paid media to campaign tours, “hasn’t really started yet,” but the incumbent is raising big money — he had nearly $3 million in the bank at the end of June.

“His team is experienced and all of them have been through tough election cycles, and their approach is similar to ours leading into 2016: assemble a really good team, stockpile money, and prepare for the toughest challenge,” O’Daniel told Morning Consult in an email last week.

Flake might have another thing going for him. Conservative unease with McCain made some sense on paper: The self-described “Maverick” had a 49 percent rating by the Heritage Action’s 2016 scorecard and ranked 19th out of 100 senators by the Club for Growth’s 2016 barometer, and that was before he sunk the Senate’s hopes of repealing Obamacare last week.

Nevertheless, McCain won — swatting down Ward’s intra-party challenge. He then coasted to re-election, 53.7 percent to 40.8 percent, over then-Democratic Rep. Ann Kirkpatrick — despite publicly distancing himself from Trump.

“Like McCain, there is a percentage of voters who will not vote for Flake in the primary,” O’Daniel said. But, he added, Flake is making inroads by diving into local issues, such as natural resources, and said he has a willingness to “travel around the state and connect personally with voters.”

“It is going to be important, especially in the primary, to remind people that Senator Flake is a fiscal hawk,” said O’Daniel, now a political consultant in Arizona but not currently involved in Flake’s campaign.

Despite worries on the right, Democrats have not rushed to put up a challenger. Rep. Kyrsten Sinema (D-Ariz.) is a top pick among national Democrats — her most recent filing with the Federal Election Commission shows $3.2 million in the bank — but she has not said much about the possibility of a Senate campaign. She declined an interview request through a spokesperson, who did confirm she is considering a run.

Correction: An earlier version of this story incorrectly stated the name of the Federal Election Commission. That previous version also said Graham did not respond to requests for comment. Morning Consult did not request comment from him.