Voters See White House in Chaos as Scaramucci Is Pushed Out

“Anthony Scaramucci will be leaving his role as White House Communications Director,” the White House said in a statement issued 10 days after his job was announced. “Mr. Scaramucci felt it was best to give Chief of Staff John Kelly a clean slate and the ability to build his own team. We wish him all the best.”

A Morning Consult/POLITICO poll conducted Thursday through Saturday – after The New Yorker published an interview with Scaramucci, who went into a profanity-laced tirade against then-Chief of Staff Reince Priebus and White House leakers – found a plurality of registered voters saying they did not want Scaramucci to serve in the White House any longer.

Thirty-nine percent of poll participants said Scaramucci should be fired or resign because of his comments, while 26 percent of them said he should be allowed to stay on as communications director. Thirty-six percent said they had no opinion, a position underscored by the fact that 55 percent of respondents said they had heard nothing or not much at all about Scaramucci’s comments in the interview.

Congressional Republicans reacted negatively to Scaramucci, with Sen. Susan Collins (Maine) criticizing his tone in a Sunday interview with CNN.

Forty-five percent of Americans had heard either a lot or something about Scaramucci’s comments, which became the focus of cable news Thursday night and into the weekend. Fifty-two percent said his remarks were inappropriate, including a plurality (37 percent) of GOP voters.

Along with criticizing Priebus, Scaramucci said he reported directly to the president rather than the chief of staff, undermining the power of the person who runs day-to-day operations at the White House. Beyond Scaramucci, voters said they don’t think Trump’s administration is running smoothly. 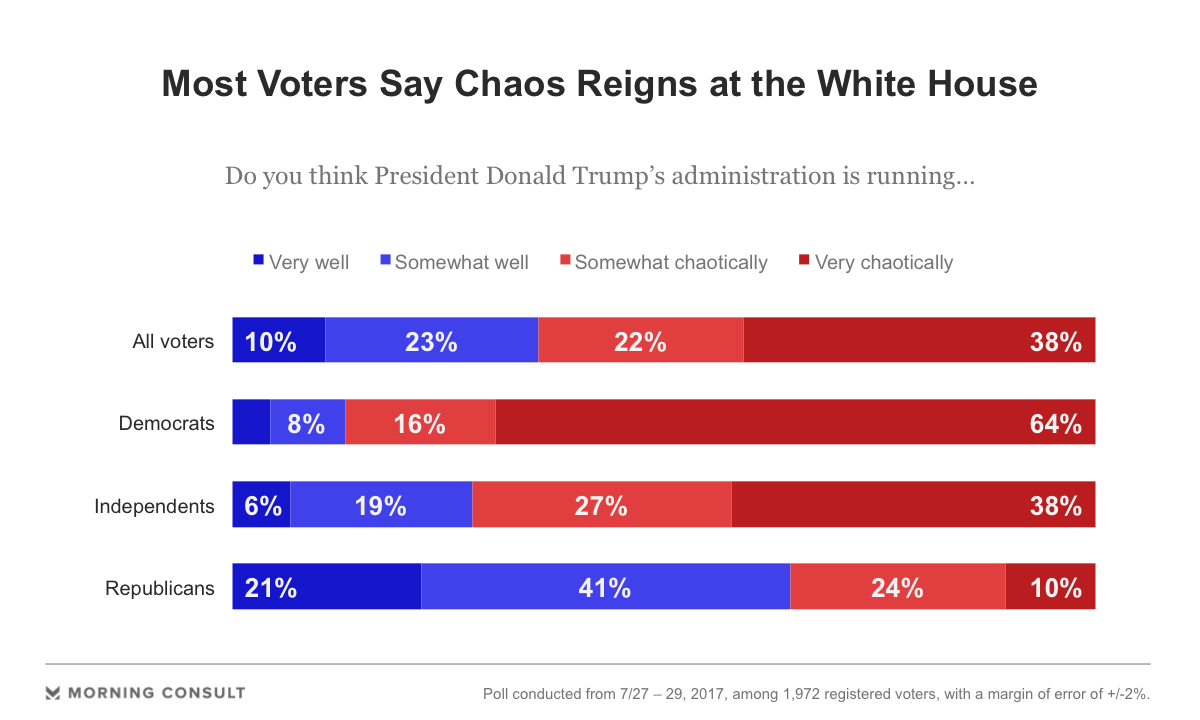 Six in 10 registered said Trump’s administration is running “chaotically,” while 33 percent described it as running “well.” In Twitter posts Monday morning, shortly before Kelly was sworn in as chief of staff, Trump said there is no White House “chaos.”

The survey of 1,972 registered was conducted July 27 through July 29 and has a margin of error of plus or minus 2 percentage points. See the full results here.